Leptocosmosis is a cancer-like decay of the universe in which quarks spontaneously decay into Leptons, leaving atoms with no nuclei, and thus causing them to disintegrate.  It is a process that physicists specializing in Apocalyptic Woo Theory predict will begin very soon.  And when it does, the universe will quickly dissipate into a useless, virtually weightless cloud of electrons and neutrinos (the two most stable forms of leptons).

When is this predicted to begin?  Physicists are very clear on this.  It will begin when ... well ... when pigs fly.

You see, one of the earliest symptoms of Leptocosmosis is the decay of fatty organic molecules into a weightless Leptonic state.  Thus pigs and other Lard Laden Land mammals will Literally begin to Levitate.

So L is really for Levitating Lard Laden Land mammals.

Conspiracy theorists have discovered that the epidemic of obesity among humans around the world is being caused by a carefully orchestrated and deliberate campaign of subliminal brainwashing masterminded by a secret religious cult.  The conspirators believe that Leptocosmosis is the physical manifestation of the Rapture.  When the Levitation begins, the most Lard-Laden believers will be the first who will be Lifted up to Heaven to join the Lord.

Are you buying any of this?  I didn't think so.  Actually, I'm ashamed to admit that today L is for 'Long'.  Plain, dull, ordinary 'Long', as in Long Trail, Long day.  But that's just too boring.  It's Lame.  It's Lack-Luster. There's no Lure to attract you readers.  So I had to contrive one:  ergo Leptocosmosis!!!

Okay, so now that I've Lassoed you with my super-clever but completely bogus Lead-Line, I can get on with describing today's hike.

And today, I had to do a Long stretch of the Long Trail through the Glastenbury Wilderness because there is nearly 23 miles of trail between road access points.  I have to park at either end and hike to the middle.  So I have another Long hike to look forward to tomorrow.

I did a little more than half today - 12.4 miles of trail, out and back, making my hike 24.8 miles.  That's the longest hike I've done since April 12th when I was traversing the flat Cumberland Valley in PA.  Today's hike was anything but flat.  It began in the notch carved by City Stream east of Bennington Vermont, at about 1400 feet, and climbed to the fire tower at Glastenbury Mountain at over 3700 feet - a couple hundred feet higher than Mount Greylock, and thus the highest point I've reached in many months.

The weather was ideal for viewing the panorama of New England mountains from the fire tower.  Here's a sampling: 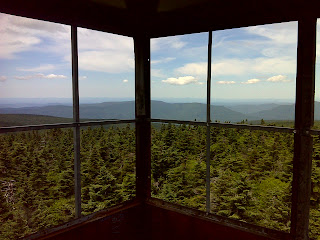 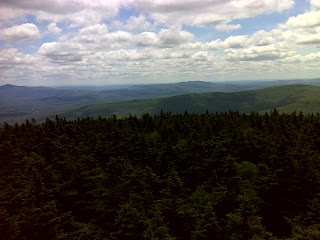 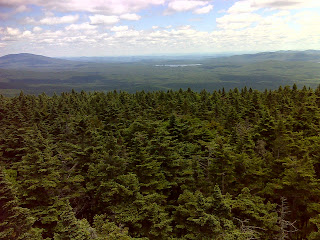 Yes, it was a beautiful day to be Levitated to such heights.  Too bad I had to do all the Levitating with my Legs.  No help from Leptocosmosis at all.  I guess I'm just too skinny.

Here's a map of today's hike with a link to more photos:

AT Day 152 - Glastenbury Mountain at EveryTrail
EveryTrail - Find hiking trails in California and beyond
Posted by PJ Wetzel at 6:15 PM