Trail people - a connection that boggles the mind

This is "Mag-Lev" (as in 'magnetic levitation').  It's not a great photo - taken early in the early morning in a patch of bright glaring sun.

I first met Mag-Lev yesterday, passed him twice and then met him at the Pass Mountain Hut during my late evening visit.  Our conversations were friendly but superficial then.   I didn't learn his trail name then.

Today I hiked south to the side trail to the Hut and turned around (no need to visit a shelter twice when it's 0.2 miles off the AT).  On my way back north this fellow passed me.  He's a fit man, 40-ish, fast hiker.  And he had a deadline to meet - Front Royal to meet his pick-up by 1PM tomorrow.  But we had a conversation before he pushed ahead.  That's when I learned of his destination, still didn't ask his trail name.

Somehow the conversation picked up again before he was beyond ear-shot, and he slowed down again.  I learned that he had started at Montebello last Wednesday, just out hiking for a week and a half.  On that rainy frigid day when sleet fell, he had the unexpected luxury of staying at the hiker cabin at Loft Mountain Campground - something neither he or I knew existed.  And when he asked, I told him the basics of my adventure, and that I have just a bit over 250 miles left to hike.  Then I apologized for slowing him down and bid him good luck getting to US 522 by 1PM tomorrow.  He wished me well on my final 250 miles.

Fine.  Nice Guy.  Really glad to have met him.  I still hadn't learned his trail name.

But the guy was still in sight when he got to the road crossing at Beahms Gap (where I had parked), and he started to turn right toward the overlook, not seeing that the trail went into the woods a bit to the left. I called out to him to correct him, and pointed out my vehicle parked as close to the AT crossing as I could park in the south end of the overlook.  I asked if he needed anything - snacks, water, etc.

I answered that I had just moved to NC at the beach.

His response “I live in North Carolina too - at the other end of the state, in Boone.”

“Oh,” I said, “You know, I’ve met a few hikers from Boone during my travels. One who stands out in particular is 'Huckleberry', who I met way down south in Smoky Mountain …”

Yes.  Wow!  After a bit more discussion the amazing connection was confirmed.  'Huckleberry' was one of the special foursome who I took the time to talk with at Tricorner Knob Shelter on a day when I had no time to talk - a day I needed to cover 30 miles before midnight.  But this bunch impressed me with their chemistry and friendliness - I just had to take the time to get to know them better. 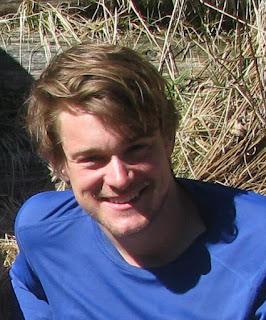 Mag-Lev had met the other three as well - Green Bean, Moses, and Spoon.  It turns out that they had spent a night at his home (where Huckleberry still lives).  He was as impressed as I was with this gang of kids - really great people, his son not the least among them.  At left is the close-up of Huckleberry from the group photo I took back on March 10th.  The family resemblance is pretty obvious. 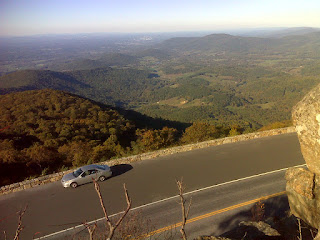 Finally, after taking one-another's pictures, we parted company and my day's hike settled back to a more normal pattern - beautiful fall woodlands on a bright chilly fall day.  The trail gave me a good view or two of the Shenandoah Valley, the best being this one, taken from the "overlook of the overlook" where the AT leads you to a rocky perch above the vehicle overlook on Hogback Mountain, with a grand view of the Shenandoah Valley on a crisp, clear day.

The rest of today's 20+ miles of hiking was pure pleasure, but there weren't any more good photo-ops that I feel are worth sharing - just road crossings and side trail junctions and lots of time strolling the Appalachian woods.  There are worse ways to spend an October day!

AT Day 254 - Hogback at EveryTrail
EveryTrail - Find the best Hiking in Virginia
Posted by PJ Wetzel at 2:33 AM