These two landmarks in the southern section of Shenandoah National Park were the bookends of today's hike.  I started the morning by going over Blackrock, which seems more like a pile of rocks than a rock outcrop.  But either way it is a place to get some great views, mostly off to the west: 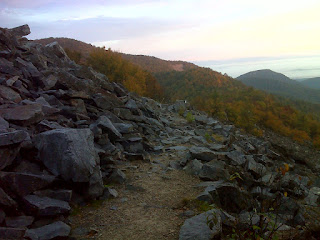 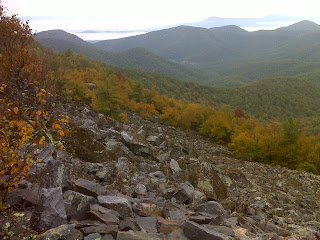 Then, after some transitional walking that included several crossings of Skyline Drive, I followed the AT on its circuitous loop around Loft Mountain Campground.  It's as if there's some sort of 'plague' there and the AT can't just take the direct route and pass through the campground.  Instead it makes a huge wide swing around the perimeter.  There are plenty of places elsewhere along the AT where the trail tromps unapologetically right through parks and campgrounds.  Even here in Shenandoah, you barge right through the midst of the bustle at Skyland, particularly the stables and the hugely popular Stonyman Nature trail (this I know from my previous hike through the park two years ago).  But here? ... no ... the Loft Mountain vehicle-campers must not taint the hiker purist, and vice-versa.

Anyhow, Loft mountain offered another nice view to the west: 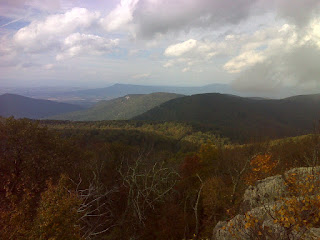 And it was the venue for a few 'local color' photos.  The fall color change is rapidly coming here now, and I found these diminutive brightly colored partners right on the trail: a columbine and a little red maple seedling, both sporting their technicolor dress:


The Witch Hazel are in bloom too, with their delicate twisted blooms:


And the deer on Loft Mountain (and elsewhere in the strictly no-hunting zone of the park), have lost nearly all fear of humans.  I encountered at least a half dozen of them, and got close enough to 'shoot' this nicely posing two point buck:


The trail itself was all very easy hiking, even with the elevation changes (which weren't too extreme), and the weather got to feeling almost summery by afternoon.  It was a great day to be out and about and footloose in the woods.

Here's a map of the hiking done today, and a link to photos taken:

AT Day 247 - Blackrock at EveryTrail
EveryTrail - Find the best Hiking in Virginia
Posted by PJ Wetzel at 3:17 AM