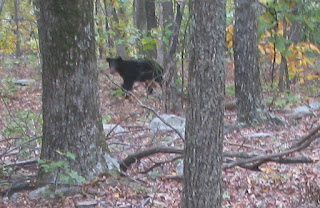 ... I'd have nothing to show you today but road crossings and side trail junctions.

Walking in the woods alongside Skyline Drive - a wonderful pastime, but there were no views during today's rain shortened hike, and even if there were, they would have been hazy and misty.

But I did see this young bear and, about five minutes earlier, another one who may have been a sibling.  These are bears number 8 and 9 of my 2012 hiking adventure.

I also met a Flip-Flop hiker who summited Katahdin two days after me and had been hoping to catch me up there - now glad to have a chance to connect down here.  For the full story, I'm pasting in my personal journal entry for today:

I planned to hike short legs all day to minimize any finish in the rain. I hiked south to Jarman’s Gap, about two miles, and back through the pretty valley at the headwaters of the South Fork of the Moorman’s River. Much of the rest of the day’s hiking was on dry high ground, some so dry that the forest was very scrubby and short – as low as 8 feet in height. The soil was surely very poor (shale?) in these areas.

I reloaded quickly and headed north from the Sawmill Run overlook, climbing to the Turk mountain trail junction and on the short distance to the next crossing of Skyline Drive at Turk’s Gap where there is a big trailhead parking area. I made the return hike, passing a guy doing a section hike northbound. In all today I also passed another cluster of SoBo thru-hikers – seven of them if I kept count properly.

I returned to my van and moved it to Turk’s Gap and hiked a short leg northbound to the halfway point to the next road crossing near the Wildcat Ridge trailhead parking area. On the way north I heard a rustling off to the side of the trail – it was a bear. I got a decent look at it and took a quick photo, but nothing showed up in the photo that is recognizable as a bear. But then barely a quarter mile farther on, and probably because I was now alert for and thinking about bears, I spotted another one. This time I saw it before it noticed me, so I got a good photo. Both bears were medium sized, seeming young, and I wouldn’t be surprised if they were siblings.

After I set a way point and turned around I met the same section hiker continuing north. We joked about my strange appearance headed southbound and passing him twice, but I quickly explained my vehicle leap-frog hiking strategy. By then there was a little light mist in the air and tiny rain drops, but it was not getting anything wet.

I picked up my vehicle at Turk’s Gap and moved north to the Wildcat Ridge parking area, took the short side trail to the AT and headed south. Sure enough I met the section hiker for the third time. This time ‘Mailman’ and I had an extended conversation and as we talked a SoBo thru-hiker named ‘Chuck-e-Phish’ arrived, curious about our conversation. As he joined the conversation I learned that he was doing a flip-flop from Harper’s Ferry and had summited Katahdin on September 12th. When I told him he just missed me (I did it Sept. 10th), he asked if I was ‘Seeks It’. He had been watching my entries in the shelter log books and was hoping to catch me before the end. He said he was glad to have finally met me.

We all hurried on our way then – he wanted to get on to Calf Mountain Shelter before the rain got serious (it was continuing to get more misty and drizzly). I headed on to my turn-around way point and then back to the Wildcat Ridge trail. By then the mist had made things a bit damp, but not seriously, so I decided to head on north about half the distance to the next access point at the Riprap Trailhead parking area. But by the time I was about a half mile north, it began to rain lightly and just steadily got heavier. It never got beyond being a light rain, however, so I continued north to my planned turn-around point at a sharp high-point in the trail.

I decided not to put on my poncho, but just endured the light rain until I got back to my vehicle. My down jacket was fairly wet, but my feet had remained dry as had everything else except the top of my day pack. It was continuing to rain, and it was 3PM, so I decided to quit for the day.

Of course the rain immediately stopped in response to that decision. Well, not immediately – I drove north to scout the Riprap parking area and then headed south back toward Waynesboro (now 15 miles down Skyline Drive).  And it was during that drive that the rain, and even the mist, ended, leaving only a high overcast.

I have to add that all of the hiking today was on super easy trail, gentle grades where there were climbs, and virtually no rocky footing at all.  If the weather had been perfect, it would have been a good day to log big miles.

Tomorrow the forecast is for more rain.  I'll be trying to get in some miles, but also trying to stay dry.  As always I'll keep you posted.

Here's the GPS track of today's hike, including some straight lines that connect the various parking areas where I launched into various sections of today's hiking.  The title line is a link to the entire set of photos I uploaded for your viewing pleasure from today's hiking.


AT Day 245 - southern Shenandoah Park at EveryTrail
EveryTrail - Find the best Hiking in Virginia
Posted by PJ Wetzel at 3:11 AM