Well, Okay, actually it was sleet with little globby snow lumps mixed in, and some rain mixed in as well.  But it was 35 degrees, and it felt like winter.  So hiking in this stuff today gave me the sense that I had come all the way through the annual cycle.  I hiked through many small snowstorms in January and February farther south in Virginia, and now the first of the new season has hit here in the Big Meadows area of Shenandoah Park.

I don't have a photo to show you of kids making snowmen, or of Lodge workers shoveling snow (they were actually there working - but were raking leaves as the snow fell).  But I do have a special photo to share.

I hiked only 4.5 miles of new trail, returning to Hazeltop from the north and hiking as far south as the side trail to the Big Meadows Lodge.  The photo is of the hands-down best 'green tunnel' spot anywhere on the trail (in my humble opinion).  I hiked here in June 2009 and noted it then.  Here's how it looked today, complete with a father-son day-hiking team who agreed to let me include them as they strolled down the long-straight grass-lined section and away into the distant 'tunnel' at the end. 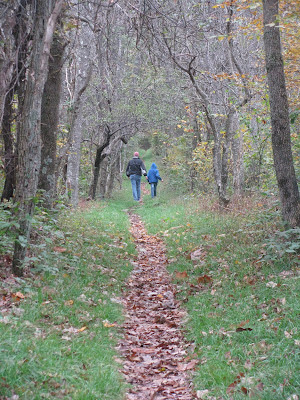 By the way, I passed the Meadows Cemetery - the trail goes right by it, at Tanners Ridge Road.  It provides tangible proof that Big Meadows was NOT named for the big grassy meadow across from the wayside, but for the family named Meadows who owned land and lived in the area long before the park took over.

Today was a short hiking day because I didn't get back to the area until 10AM after driving back from Maryland, and because after 5PM the rain became steady and fairly heavy.  No more snow, but the temperature remained in the 30's.  It looks just a tad warmer for tomorrow, and the leaves are now changing here in earnest.  I'm looking forward to a full and colorful hiking day.

Here's the map of today's hike with a link to more photos:

AT Day 251 - Big Meadows at EveryTrail
EveryTrail - Find the best Hiking in Virginia
Posted by PJ Wetzel at 1:28 AM