Fall moved in overnight.  It got down to the mid-40's F by sunrise.  There was a northwest breeze.  Humidity was low and visibility was great.  It got into the 60's during the 'heat' of the day.

Yes, Autumn arrived today, not just according to the calendar, but according to the way it felt.  It's hard to believe, but I began this epic quest just a few days after the beginning of winter.  So now I've hiked into my fourth season as the grandest of Earth's natural cycles comes 'round to completion.

I revisited Bluff Mountain in the morning, and the views were far less hazy.  Then in the afternoon I passed along-side of Lynchburg Reservoir.  Full details follow, copied from my personal journal:

I returned to the Punchbowl Overlook AT trail parking area and prepared and was on the trail at 8AM. 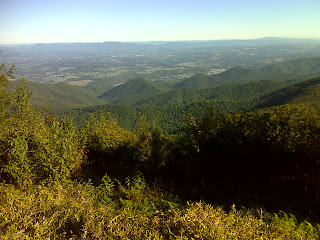 I hiked the two miles south to Bluff Mountain where the views this morning were magnificent – no haze. On the way back I visited the Punchbowl Shelter. My left knee was seriously hurting again this morning – the outside of the knee joint – the place where it hurts when you hike downhill too vigorously. So I took some Ibuprofen as I started hiking. That and the usual gradual limbering-up process soon caused the discomfort to disappear. But I do worry that I’ll abuse the injury if the pain is masked by the medicine. Still, I feel like I’m on the home stretch and want to keep pressing forward. Hopefully I’ll reach a compromise with this injury and will not abuse it, and it will fade away as it has before.

I got back to the Punchbowl Overlook at 10:30 and reloaded supplies and then headed northbound for a longer leg. The trail goes through several ups and downs, the longest of which is 300 feet elevation each way and takes you to the summit of Rice Mountain where there are no views or anything else remarkable. 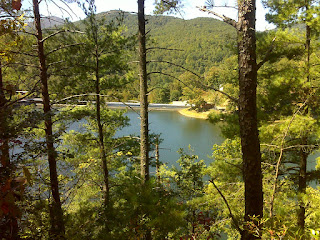 There the major descent begins down to Lynchburg Reservoir – about 1200 feet elevation change. Lynchburg (Pedlar) reservoir is strictly off limits to the public and the AT seems to take pains to keep you away from it. You cross a big suspension bridge over the outlet river, out of sight of the dam, and then only get your first glimpse of the dam and reservoir after the trail has made a wide swing around the south end of the reservoir and climbed more than 100 feet above the water level.

There the trail keeps a very respectful distance from the lake, though there are constant views of the water through the trees. On the north end the trail drops close enough that there are two stealth campsites by the water. Here’s the view from the better of these – very pretty day to be here: 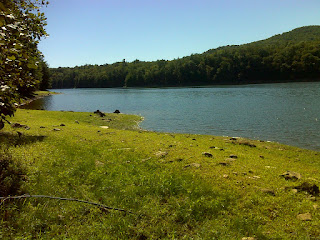 Beyond the north end of the lake, the trail follows Swapping Camp Creek upstream for a while then crosses it on big rock slabs and begins a small climb to the crossing of Pedlar Lake Road, FS 38. That was where I turned around for the day at 2:10PM – within five minutes of the time I had planned to turn around. The hike back had 1000 foot vertical gain, so I expected to take a little longer to do the return leg, and I did. I was back at the Punchbowl Overlook on the BR Parkway at just before 6PM - a ten hour day and 9.1 miles of new trail covered.  At this pace I could be done by Halloween.

Here's the plot of my hiking route today, and a link to more photos:

AT Day 237 - Bluff Mountain, Pedlar Lake at EveryTrail
EveryTrail - Find the best Hiking in Virginia
Posted by PJ Wetzel at 12:35 AM