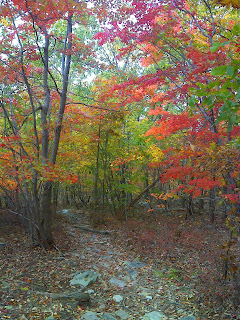 Today’s drive was 80 miles to the trail head at Ashby Gap. I prepared and was ready to hit the trail at 8:15 when two hikers came by going northbound, both of whom I’d met separately on previous days. We struck up a conversation that ended up lasting at least 15 minutes. ‘Shaky’ is 55 and hiking a section to Harpers Ferry, and ‘LA’, who looks Hispanic/native American is hiking from Rockfish Gap to New York City (Bear Mountain Park). This is his first AT hike, but he's also done 500 miles of the Pacific Crest Trail.  These two met because they both stayed at Bears Den hostel last night. Finally we headed our separate ways around 8:30 or so. I climbed up to Bears Den rocks and absorbed the only view of the day. The rest of the walking was in the woods with no good views, and I really wish I had some views of the intense fall color on adjacent slopes, which I had scant tantalizing glimpses of.

Anyhow, I visited Bears Den, but it seemed all dark, and the backpacker hostel was locked up, as usual (day hikers not welcome). This place gave me the impression of being a dark, unfriendly fortress both two years ago when I visited in the middle of the day, and this morning.

The rest of the day was hiking the ups and downs and often very rocky and eroded trail through the ‘Roller Coaster’ to VA 605 and back. I was not hurrying, taking in as much of the ambiance of fall color as I could.

Fall color is so fleeting, I want to soak it up and savor it. It will be gone in a week. And this year’s display seems particularly good – enough moisture to keep the trees from shutting down prematurely.

The only distraction from the woods walking was a stop at the Sam Moore Shelter where the log book had entries from Iceman, Samus, and Achilles all together (plus lots of others that I'd met), but none from Parkside.

I was back at the Ashby Gap trailhead at 5:15, and the forecast afternoon storms were nowhere in sight yet, so after changing, I decided to take advantage of the hour of light and drive to Blackburn Trail Center. This is an official AT shelter that is (theoretically) easier to get to by vehicle rather than from the trail, since there’s a major drop in elevation to get from the AT on the ridge to Blackburn, which is down on the lower slopes. But those slopes are still steep, and the road up to it has not been maintained for over a year. According to the caretaker, the guy who was doing it with a road grader has quit and they can’t afford a replacement. I suggested they acquire a cheap road grading implement, much like a heavy rake, towed behind an ordinary pickup truck. I saw this very successfully being used on private roads up in Maine.

Here's the map of today's hike and a link to more photos:

AT Day 260 - Bears Den Rocks at EveryTrail
EveryTrail - Find the best Hiking in Virginia
Posted by PJ Wetzel at 12:49 AM