It's beginning to feel like the home stretch.  Today I passed the huge milestone of having hiked 4000 official miles of Appalachian Trail, leaving only 368.4 miles to go.  My mind's starting to drift - thinking of what I'll be doing after the trail.  But it was also a great day to be in the here-and-now.  I'm going to let my personal journal entry describe the day in detail:

The morning forecast narrative for Waynesboro suggested that the showers would be moving out by 7AM and the sky would gradually clear, so I decided there was no reason to delay the morning hiking, except for the time it was going to take me to finish computer work and make the drive back.

I finished everything and shut down the laptop at 6:30 and immediately left to start the drive. It was about 37 miles back to the area where I was hiking, and to add to the bad fortune, the place I intended to park first, Ivy Creek Overlook, was closed for construction, so I moved on to the next parking area, just a mile and a half farther, at Pinefield Gap and parked at the tiny gravel pull-out there beside a gated fire road. I prepared and was on the trail an hour late, at 8:15.

I had to hike only 7 miles of new trail today to pass the 4000 mile mark, so that was all I had set for as my goal for today. I hiked the extended leg south, now more than 4 miles, past the closed overlook where even the trail was closed where it passed through the overlook. It was rerouted to the road for that short distance.

There were three hills to climb, but all on gentle slopes with easy trail almost all the time. The prettiest part of this section was around Ivy Creek, where the trail first goes through some dry high ground with a solid ground cover of teaberries (also called American Wintergreen) with the berries abundant on the plants, then takes you through some pretty riparian moist areas with the leaves changing and the stream babbling beside you. 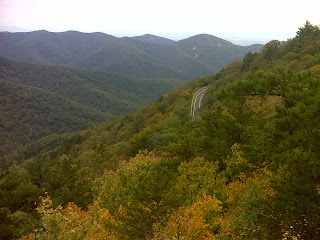 At the north end of this stretch is a rock outcrop with the nicest view I had all day, looking west over Skyline Drive (photo at right).

I turned around at the hazy view toward the east near the summit of Loft Mountain and returned.

Today as I hiked I sometimes had my mind elsewhere, and actually stopped a couple times to write down a few book ideas for ‘The Ice King’, my fantasy/sci-fi novel, which has been practically on hold since I started my hiking adventure, but has just won third place in the Maryland Writer's Association biennial book contest in the Sci-Fi/Fantasy category - a pretty big deal!  Now that I’m nearing the end of my hike, my mind is beginning to drift toward the things I’ll be doing afterwards, and foremost among those is writing.

After returning to my starting point I continued on north for a short leg to the summit between Pinefield Gap and Simmons Gap. That walk was very easy and went quickly. I then moved my vehicle to Simmons gap, parking on the grass at the trail crossing and across from the road to the ranger station. I hiked the leg south to the summit, slightly steeper on this side, then hiked a final leg north to another summit – a 750 foot climb in a mile and a half - between Simmons and Powell Gaps. It was along this section that I passed the milestone of 4000 official AT miles hiked in 2012. That leaves only 368.4 to go.

In the woods, just off the trail, while I was taking care of nature’s business, I found a pretty well preserved bear skull – possibly a young one – so I packed it and took it with me as a 4000 mile souvenir. 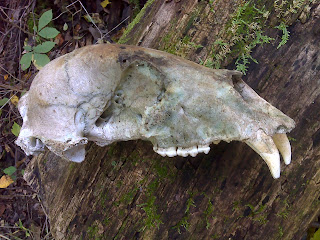 I was finished with this easy leg at 5:30PM and called it a day. I wanted to stop early because I needed to search for internet access outside the park.

Internet access found.  Another great warm fall day is forecast for tomorrow.  So I'm excited to see what the trail has in store for me on my 249th day-hike of the year.

Here's the map of today's hike, step by step, and a link to more photos: