Saddleback - the curse of the ski summits

It's an exaggeration, but it makes a good story.  I touched on it yesterday - how I had summited Killington twice in thick fog and got no views, same for Bromley.  Truth is that I have had nice views from other ski summits, Stratton in particular.  But I've now crossed the summit of Saddleback three times in the past two days and every time was in dense fog.

What's more amazing about Saddleback's 'curse' is that as soon as I began to descend from her summit this morning (I hiked up to it from the Ski Lodge), the fog began to break.  Then the rest of the middle of the day offered some great views, and it was only as I ascended Saddleback again in the late afternoon that the fog rolled back in.

But from the adjacent partner Mountain (also a 4000 footer) called The Horn, I had nice views both morning and afternoon.  Here's the look at Rangeley Lakes from there (the ski lodge area can be seen by the post). 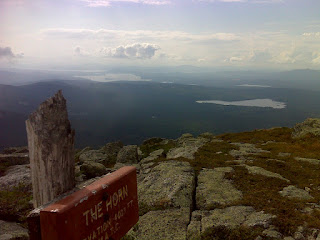 What Saddleback couldn't hide from me was its beautiful tundra.  I finally found the pristine tundra shot I have been hoping for but failed to find all through the White Mountains and the Mahoosucs.  Here was a little patch of ground-hugging color that featured no flowers at all.  The blue berries are bilberries, but I've always called them blueberries anyhow because they look the same (except for size) and have identical taste to their much larger cousins.  I'll never forget the day in August 1970 in La Vérendrye Wildlife Refuge, Quebec when I sat down in a patch of bilberries like this and literally ate my fill of these sweet little morsels without having to move - enough within arms reach to fill my stomach.

It was a twelve hour day of hiking to do 5.5 miles of AT (plus the 2 miles each way from the ski lodge).  This bit of trail, from Saddleback summit to Poplar Ridge, had a lot of difficult trail, made worse by all the water on the steep bedrock and eroded and boggy areas of trail from all the recent rain.  It has rained, often hard, for three days, usually the bulk of it in the late afternoon and evening after I was off the trail.  And the pattern repeated today.  At 7PM a serious squall line moved through and dumped another heavy dousing of unwelcome water on the footpath and on the branches and twigs that crowd it from each side, which you inevitably brush against.  Today I was pretty well soaked from that source even though it didn't actually rain while I hiked.  Now I'm assured that tomorrow morning will bring more of the same.

Here's today's hiking route plotted on a map, with a link to a whole lot of additional photos:

AT Day 203 - Saddleback from the N and W at EveryTrail
EveryTrail - Find the best Hiking in Maine
Posted by PJ Wetzel at 5:54 PM