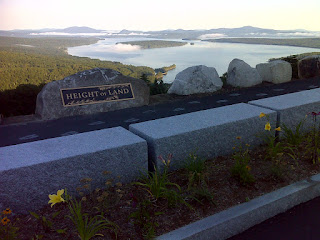 The best viewpoint I had today (shown above) was from the parking lot where I started and ended my hike - the brand-new scenic overlook on Maine Highway 17, which now has plenty of parking space for hikers (the guide books still insist that you park a half mile down the road, but signs posted on the trail by the Maine AT Club give the updated information).  The featured landmark in this view is the expansive lake known as Mooselookmeguntic Lake.  Here's essentially the same view in its afternoon dress and taken from the actual point where the AT crosses the highway, fifty yards down the road from the parking area: 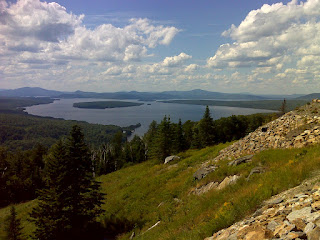 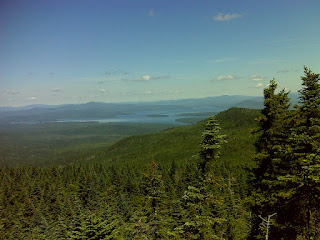 The second best viewpoint I had today was from the other end of my hike, on the slopes of Bemis Mountain, where I turned around at a trailside overlook.  Featured in that view:  Mooselookmeguntic Lake. 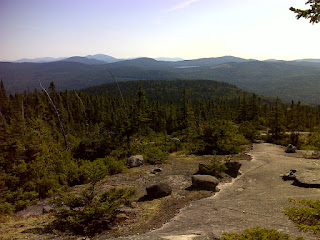 The third best viewpoint I had today was from somewhere in between: the extensive open summit of Peak 2 of Bemis Ridge.  Featured in that view:  Highway 17 and its new scenic overlook - I could see my vehicle parked there from five trail miles away.

That's gotta be some sort of record - it surely is the farthest I've hiked on the AT while remaining within view of my starting point.

Now the story of that unusual name:  Mooselookmeguntic.  At 17 letters in length, it is listed as the 4th longest place name in the US; and the town by that same name is tied for the longest name of a US town.  (Interestingly, the name of a town where my Dad grew up, Schleisingerville, Wisconsin, used to be one of the other names in this dead-heat for longest town name, along with Kleinfeltersville, PA.  But in the 1920's the powers-that-be officially renamed my Dad's hometown 'Slinger').

Now ... the story goes that one day a hunter was out hunting moose.  He caught sight of one browsing near a lake, pointed his muzzle-loader weapon and pulled the trigger.  Problem: he had forgotten to load it.  The gun just made a furtive little ticking sound.  Furious, the man shouted at the bemused moose ...

Wait ... that's the humorous version.  Truth is, the name is an Abnaki word for 'Moose feeding place'.

I'd just call it a darn pretty sight.  Happy to be here to see it on both ends of this beautiful hiking day.

Here's the map with today's hike plotted on it, and a link to more photos:

AT Day 199 - Bemis Ridge at EveryTrail
EveryTrail - Find the best Hiking in Maine
Posted by PJ Wetzel at 4:09 PM