Out in the clear, back in the rain

Copied from my personal journal:

Today's plan was to either not hike at all or to get a very early start and beat the weather. I checked weather and decided it was worth hiking. The forecast was for a 60 to 70% chance of rain, and it looked like the risk would increase all day. Only very spotty showers were about the area in the morning. I drove to the nearby Stony Brook Trailhead and prepared and was on the trail at 6:30AM.

The trail begins at low elevation – 950 feet, and climbs gradually on easy footing to over 2000 feet in about 2.5 miles, then it begins to be rough, following some rocky eroded stream channels in places—a strange choice for trail location. Finally I reached the AT and was surprised to find that I had done the 3.6 miles in 2:10, whereas the guidebook indicated 2:55.

It began sprinkling a little, never enough to wet the trail as I made the traverse to Imp Shelter. This bit of trail, less than a mile, is nasty because it has constant steep ups and downs with some poor footing thrown in. I visited the very cute Imp Shelter on a side trail then began the ascent to North Carter Mtn. That was a significantly tough ascent. There were three or four places of real challenge – as tough as any place in the Whites, though these challenges weren’t as sustained as they were in the most notorious places, such as the Beaver Brook Trail.

Nearing the top of North Carter the slope lessened and the hiking was pretty easy. The saddle between North Carter and Middle Carter began fairly easy, but once past the North Carter side trail, there were several knobs to negotiate with significant scrambling and ups and downs, but with the rewards of good exposed viewpoints before reaching Middle Carter’s wooded summit. The highest viewpoint – a very good one, is just a few hundred feet north of the Middle Carter Summit; and when I got there I could see a wall of rain approaching from the southwest. It had already shrouded all views of Mt. Washington and looked to extend east and west, such that there was no way it would not hit me.


I turned around and headed back as per the plan. It took longer for the rain to hit than I expected, but it did hit. It was very fine, misty, almost drizzle, but heavy enough to thoroughly wet everything pretty quickly. When it finally hit I took refuge under a dense Balsam Fir and stood there, keeping dry for a while. But I got tired of this, as the rain wasn’t letting up, so made some progress over the summit of North Carter before finding an even more dense old fir that had such a thick set of branches and needles and lichen growth that it would be a very long time before any rain penetrated it.

I stood there for 20 minutes or so, hoping the rain was a shower that would pass. It wasn’t. But I kept dry and comfortable, putting on my hooded sweat shirt while I waited there. It had remained nearly calm through most of the day, which helped keep it dry under this super-dense tree.

Finally, though, it became clear that this was not a shower but a rain shield. So I started the tough descent of North Carter on rain-soaked rock. I took my time and was especially careful. To my delight I found that once I was moving I was toasty warm in the clothing I had on, and that helped my mood a lot, as I had been worried about getting seriously chilled as I got wetter.

So on I went, taking my time but progressing steadily back to the Stony Brook side trail. Once I began descending that trail the rain let up, but it had become foggy and the trees kept dripping. Still, I was warm, and after negotiating the round-rock infested stream beds that the trail follows in some of its upper sections, I began to really enjoy the humid calm weather conditions - my favorite kind of weather (when I'm dry). And soon I realized that the rain had stopped. So the walk down Stony Brook Trail was very enjoyable and pleasant. I had wet feet, but not soaked. I had damp outer layers up top and wet pants, and was always brushing against wet foliage, but my inner shirt layers stayed dry. I was back at the trailhead parking area good time, a bit after 4PM.

Here's a view of Gorham and Berlin from the knob near the Imp Shelter: 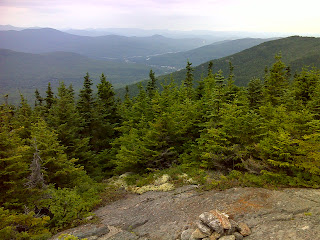 Imp Shelter has a cute little viewpoint right in front of it: 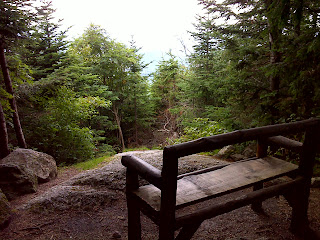 And here's a great panoramic look at all five of the major summits of the Presidentials - Washington in cloud at left, then Clay, Jefferson, Adams and Madison at right, taken from the slopes near the summit of North Carter:


Weather looks dreary tomorrow too.  It may not rain much but fog will keep things wet and there probably won't be good views of anything.  But if rain keeps away, I'll do what I do ... take a hike!

Here's the map showing today's hike, with a link to more photos:

AT Day 188 - North Carter Mtn at EveryTrail
EveryTrail - Find hiking trails in California and beyond
Posted by PJ Wetzel at 5:15 PM