A day or rest and repair

Yesterday I got done most of the hiking I had planned for today.  That meant hiking through Mahoosuc Notch both ways - down to the east end, turn-around, and head right back up to the west end.  I fell and banged myself up on the first leg, and it rained cats and dogs starting halfway through the return trip.  Needless to day it was a tough day.  So the decision to take today off was an easy one to make.  My body seriously needed it.

I slept late, tried to stoke up on calories (continuing to battle to keep my weight up), and took an hour to do a major repair to the old reliable Columbia Titanium shorts that have been on me every inch of the way - even in cold weather I've worn them underneath the winter pants.

These shorts have about fifteen years of tough wear on them.  That's no excuse, since my old reliable daypack is 42 years old.  But on Tuesday the shorts developed a rip, starting at a seam by the right pocket where my GPS unit, hanging from a belt loop, has been swinging, rubbing, swinging, rubbing back and forth once every step.  That's somewhere upwards of 7.5 million back-and-forth rubs.  The shorts were bound to fail.

I didn't have my duct tape with me on my hike - it's wrapped around my other trekking pole, not the one I was using.  So the rip just continued to expand all day until it extended from the pocket all the way down to the hem of the right leg.

When I finished the day Tuesday, I tried to repair it with duct tape, but used up all the supply on the trekking pole.  I bought more at Wal-Mart, but all they had was the completely useless 'Duck' brand.  The real stuff held up well on yesterday's hike, but the Duck brand couldn't hold for fifteen minutes.  DO NOT buy that brand,  It's a complete waste of your money.  I wouldn't take it if it was handed to me for free.  Go to a good hardware store and get the real stuff that contractors use for ... real ducts. 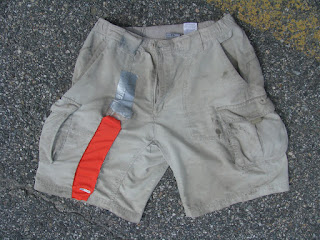 So today I ripped off the Duck brand crap and spent an hour sewing.  I used a swatch of cloth cut from a shirt that I don't use (the scissors on my Swiss army knife is proving its worth).  The result is pretty snazzy, don't you think?  Note that the *real* duct tape remains.  It's virtually stuck in place and cannot be removed.  That's why it's good stuff.

The other task of the day was relocation.  For about two weeks now the Wal-Mart Supercenter between Gorham and Berlin, NH, has been my base of operations.  But today it was time to bid it farewell.  I moved on to the Bethel-Newry area of Maine, setting up tomorrow's hike out of Grafton Notch.  I moved there early in the evening and hope to get an early start on what promises to be a tough and long hiking day between notches - Grafton to Mahoosuc and back, including the notorious Mahoosuc Arm.  No way I could have done that without a day of rest - and no way I was going to do it with a rip the length of my pants.  Today's rest day was one well spent.