It was just a scent on the air, a feel to the breeze.  Today was much cooler and less humid after a very humid day yesterday.  It never got above the low 70's, and the afternoon was overcast and breezy.  The stratus clouds were important in making it feel fall-like, because they dimmed the ambient light to what it might be when the sun is lower in the sky.  Maybe it is just me, but there's a touch of color in some of the forest undergrowth, a few prematurely fallen red and yellow leaves beginning to litter the trail, and the summer birdsong is gone.  It felt like fall - to me - that nostalgic kind of fall feeling from my childhood, anticipating coming in to a warm house after a brisk walk in the woods - a fire in the fireplace, the smell of supper cooking in the kitchen ... ahhhh, the memories.

Today's hike was a bit more strenuous than yesterday.  I'll let my personal journal entry tell the whole story and embed some photos: 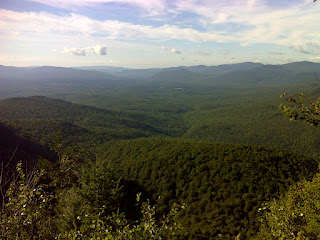 I was on the trail at 6:40AM, faced immediately with what the trail signs and guide had called a ‘ford’. Fortunately there were rocks enough to hop across with relative ease. Then there was a lot of vertical stuff. First was the climb up Moody mountain to the very summit for no particularly good reason. There’s a big spruce tree under which people camp at the summit. There’s a half decent view along the long gently sloped shoulder of the mountain as you go on.

Then the trail begins the sometimes rough and very steep descent into Sawyer Notch. This was the only section of trail that had difficult footing. There was one section about a third of the way down where a small slide had destroyed the trail and the re-route was rather ad-hoc. This descent also had several places with steel steps embedded in bedrock, and a few wood ladders. These and sections with stone steps made the overall descent easier than many in the White Mountains, but it was still slow going.

Then in Sawyer Notch there was another large stream also advertised as a ford and also having a good spot with stepping stones to cross fairly easily. 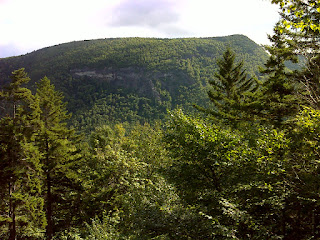 Immediately the trail begins to climb again up out of Sawyer Notch to Hall Mountain where there is a shelter near the trail’s high-point on the shoulder of the mountain (with side trail to a good viewpoint, which I didn’t take - I already had this view - shown at left - back across Sawyer Notch to Moody Mountain from the lower slopes).

The log book at the shelter had entries from Iceman, Viking and Samus, all together on June 9, then Spiral and Swivel had an entry on June 11. That was immediately followed by Paul-Parkside’s entry, also on June 11 with time listed as 4:20PM. Somebody had written ‘RIP’ next to his signature. It brought back lots of memories. There was a SoBo hiker there at the shelter who, when I asked him, told me he had been at Pierce Pond on July 27 when Parkside’s family had been there posting some swimming safety information and setting up (or adding to) a memorial to Paul. It was good to know that there was a memorial there. I’m really looking forward to visiting there, and bringing a little more closure to my own interactions with Paul.

From the shelter the trail descends barely 150 feet and then ascends fairly gradually to Wyman Mountain’s summit. There’s a small viewpoint cut into the trees just beyond the summit (going southbound). After that the elevation profile shows very little change as you travel the ridge of Wyman mountain to the south shoulder where I turned around. Yet there was one little piece of steeply vertical bedrock inserted into this section that was as tough as any bedrock scramble in the White Mountains – pretty unexpected based on the super-easy trail I had walked to get to the S Shoulder from the other direction. I turned around at noon and took my time on the return trip but still got back at 4:30.

I think this is as good a place as any to post this - the photo that Paul 'Parkside' took of me on May 6th.  Paul's mother was kind enough to send it to me.  It means a lot to me to have it. 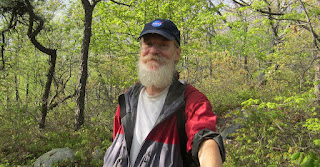 Here's the usual map plotting today's hiking route, with a link included that will take you to more photos:

AT Day 197 - Sawyer Notch at EveryTrail
EveryTrail - Find the best Hiking in Maine
Posted by PJ Wetzel at 7:44 PM