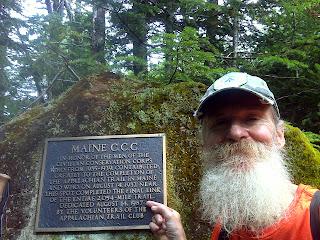 75 years ago today a crew from the Maine CCC cut the last bit of trail near Sugarloaf Mountain, Maine, which completed the Appalachian Trail.  Today I got to hike that same bit of trail on the anniversary.  I'm truly blessed.  From here, I'll let my personal journal entry tell the story: 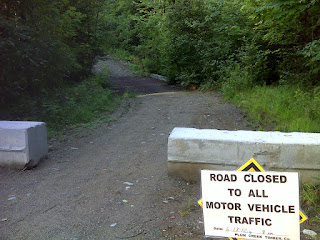 Well before daylight I headed out for the long drive up to the Sugarloaf Ski area vicinity (67 miles) where I needed to find Caribou Pond Road and drive 4.3 miles up this unimproved dirt road to the trail crossing. Well, Caribou Pond Road was blocked off at a nice parking area after 3.8 miles so I parked, prepared, and started the road walk at 6:50AM.

It took just fifteen minutes to do the easy half mile. At the trail crossing it felt like a tent city – had to walk right past people at a fire right on the trail, then crossed the West Branch of the Carrabasset River, which would have been a tough ford through deep swift water among large round rocks and boulders were it not for a single 2x10 board across the worst part – a bit springy walking across it.

Then there was a steep climb up toward Sugarloaf, with a couple hundred vertical feet that were as tough as some of the tough climbs in the Whites – but not nearly as sustained or scary as notable places like Webster Cliffs or Beaver Brook or the west side of N. Kinsman, just to mention the three that stand out most in my memory.

The rest of the trail was a bit rough in places, fairly easy in others. I passed the side trail to Sugarloaf’s summit and then began to get excited with the anticipation of passing the plaque commemorating the completion of the AT in this very section exactly 75 years ago on this very day.

I had not even realized that this plaque existed until perhaps a week ago, so clearly didn’t plan to be here on the exact day of the Anniversary, but I sure wanted to make sure that I did do that once I realized I was close a few days ago.

So it did happen, and on a very nice weather day. I passed Johannes again just before reaching the plaque – we chatted for a while. He’s taking three zero days in Stratton and several more in Monson – trying to time his completion of the trail to September 1st which is the day he returns to Germany. He clued me in that there was a register and a give-away of lapel pins at the plaque, so when I got there I took a bunch of photos, signed the register with a fairly detailed entry, and took two lapel pins, one for each direction, since I’m doing a complete double hike of the trail.

I then made the fairly steep climb up and down Spaulding Mountain. I had thought the trail went over the summit and had views but there was a side trail (150 yards, the sign said) to the summit and no views at all from the AT. I didn’t take the side trail, however, because it looked steep and rocky and there had been a few views along the way in other places – and they were hazy views today. There’s bad weather moving in for tomorrow and Thursday and in advance of it the moisture is building up in the atmosphere again.

I got to my turn-around at the Spaulding Mountain Shelter after 4½ hours of hiking and made the return trip in four hours. I had one careless fall, slipping on sloped mud just after passing the Sugarloaf side trail – was drinking a can of Dr. Pepper and trying to hike at the same time – a few small cuts and a lesson learned (or re-learned). 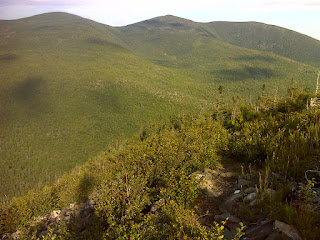 As I descended the steep part back down to the W. Branch of the Carrabasset, where there are good views of Crocker Mountain’s dual peaks, I saw a big black thundercloud off to the north. I had already decided not to hike a leg north up toward Crocker from Caribou Pond Road today (because I was drowsy from limited sleep last night and it was also not a good logistical move), but this threat of rain sealed the decision. Still, I always feel guilty ending my hike so early (3PM) and hiking so few miles (5.5 miles of AT).

Well, guess what else has a 75th anniversary this year.  The official day was July 11th, I believe.  Good ol' Spam: 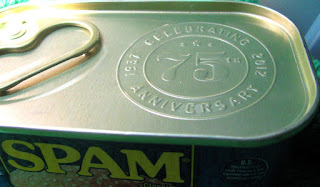 Here's the map of today's hiking route, with a link to more photos, but no more spam:

AT Day 205 - flanks of Sugarloaf at EveryTrail
EveryTrail - Find the best Hiking in Maine
Posted by PJ Wetzel at 2:22 AM