Equipment Malfunction, and a surprise

Today got off to a very bad beginning - my car wouldn't start.  But by the end of the day, it was 'normal service resumed'.  I'll let my personal journal ramblings tell the full story:

When I got up at 5:45 and tried to start the car the battery was dead. I couldn’t imagine why a nearly new car battery would go dead, but on reflection it appears that my laptop drains it much faster than I had considered possible. Anyhow I had to call AAA, and Roger Palmer from right in Rangeley, less than 2 miles away was there within half an hour.

After jump starting my car he led me to his little shop with no sign (everybody knows him) on Clay St. There he did some diagnostics on my battery, guessing that my alternator might have a bad diode or is just overcharging the battery and boiling out the liquid. That’s a possibility to look into, but since the engine started right up briskly after shutting it down there at his shop, it appears that the battery was just drained by the laptop – I had it on all night for the past three nights monitoring the weather with the engine off and did very little driving (just 8 miles up to Saddleback Ski area and back) or otherwise running the engine (since it was the right temperature outside).

Anyhow, as a precaution I decided to buy a spare battery and carry it with me. The one tiny auto supply store in Rangeley was closed until 8AM (it was 7AM by then) so I headed out for the long drive that I had to do anyway. I drove back down ME 4 to the intersection with 142 and then another mile and a half to the town of Phillips where I was unbelievably fortunate to find a big auto repair shop, literally the second building I passed as I approached the town. I expected little inside this shop other than an office, but found a full-sized auto parts store – I was shocked and delighted.

I bought a battery and adapter posts so I could use it for jumping and was on my way without needing to do any unplanned driving to find the battery. From Phillips my route to the parking area for today took me on east or north on 142 for less than 2 miles to New Madrid Road. From there I had very detailed directions to what is described as one of the most remote and hard to find trail crossing parking areas anywhere along the trail. But these directions were very precise and were spot-on.

The drive was supposed to be 10.7 miles from Rt. 142 and the last half is on woods roads with some road-wide lakes (potholes) and some rocks, but nothing nearly as bad as the Nimblewill road I successfully negotiated down at Springer Mtn. 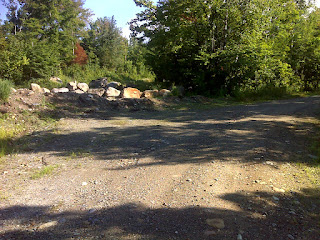 I got to mile 9.2 where the directions said take the left fork, and found that fork uncompromisingly blocked off with a big ditch and high dirt barrier followed by not one but two walls of huge boulders (some as big as 8 feet around and high). More bad news. More delays.

I parked there and got ready for the extra 1.5 mile hike to get to the trail. Another vehicle came by and stopped and I confirmed with the driver (who had been up that road before it was closed) that I was in the right place.

I was finally on the trail (or on this access road) at 9:20AM and it took only 45 minutes to walk the 1.5 miles to the AT – the road was smooth and gently graded, so it was a very easy walk. The reason for its closing was obvious when I got to the Perham Stream bridge right at the AT crossing – there was a gaping chasm before the bridge – a washout. 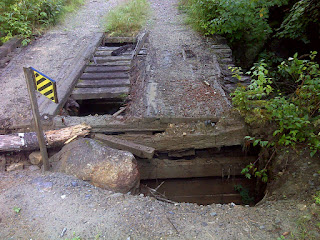 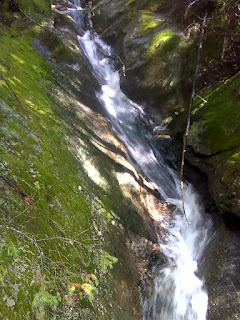 I headed on south on the AT at 10AM and almost immediately ran into Kit Fox and Man Cub sitting along the trail. We had a nice third conversation - it's probably the last time we'll meet. Then I descended along Sluice Brook, which has a section that looks like a natural sluice, to Orbeton Stream. There I decided to change into my crocs and ford it rather than cross on stepping stones that were overwashed by half an inch of water after last night's rain – fine for waterproof boots but not for my trail running shoes.

At the stream crossing I met a man who had just crossed by fording as well – a middle aged man with a German accent who I had passed several times before in recent days but never had any in-depth conversation. Here’s his photo, and the surprising story follows: 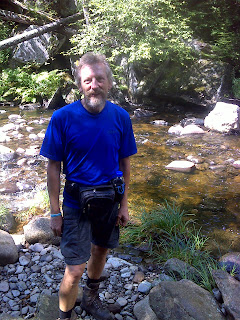 As I changed shoes we talked and I soon began to suspect that this was the same man I met at Gingersnap’s hanging bear-proof trail magic station near Rock Gap, Franklin, NC on March 22nd (must moments after I met Bomber). Johannes arrived for some trail magic at the same time that I arrived coming southbound, and in our conversation he told me he was from Munich and had until September 1st to finish his hiking.

This man today said the same thing, and that, rather than his face, was the primary trigger to my memory. The man I met today had a goatee and looked lean and fit - quite different from the clean-shaven, slightly frumpy Johannes in a narrow brimmed rain hat who I remembered from Rock Gap.

But when I mentioned the trail magic to him I could see the 'light-bulb coming on' – he remembered me because he had taken a picture of me back then (wanting to document the unique trail magic but saying to me that a picture is always better with people in it).

Once he remembered me he was super-excited, we took each other’s photos and chatted more and he took more photos as I crossed the stream and changed back into my hiking shoes. Then we each headed on our way.

I climbed up to my turn-around point on the slopes below Poplar Ridge, taking a total of just under 3 hours from Perham Stream Road. The hike back took less time and I was back at the road at 3:20PM. The weather today, by the way, was nearly perfect – warm but not too humid and partly cloudy with plenty of sunshine and good visibility (too bad there were virtually no vista points on any of the trail I covered today).

I was determined to hike until dark if necessary to cover the miles I had originally intended, despite the late start, so I headed on north from the road crossing and climbed Lone Mountain and hiked on to the Spaulding Mountain Lean-To where I turned around. This whole section was easy, though the 1000 foot climb to Lone Mtn was steep. There were no big rocks or bedrock slabs at all.

The shelter had already filled up – 8 or 9 people were there. I took the usual photo of the building, talked with the people about Parkside some, and signed the register. This and the previous register at Poplar Ridge had no entry from Paul, but had entries from some of the others that were with or near him who I knew and who had hiked with Paul.

I headed back down to the road and took just half an hour to walk the road back to where I was parked, arriving there right at sunset. The car started right up, cranking briskly.

So it was a full and eventful day and yet I wasn’t that tired because of the mostly easy trail, just some steep stuff on either side of Orbeton Stream and on the slopes up to Poplar Ridge.

And as they say, 'All's well that ends well.'

Here's a map of today's hike with a link to more photos:

AT Day 204 - Lone Mountain at EveryTrail
EveryTrail - Find the best Hiking in Maine
Posted by PJ Wetzel at 7:09 PM