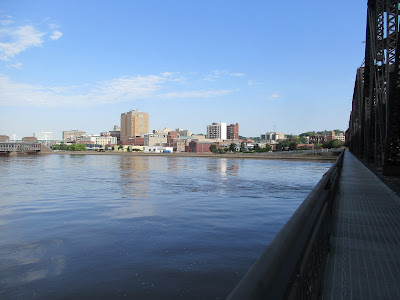 Illinois went fast.  Once I finished hiking the Hennepin Canal, there were just a few miles of road walking into East Moline, and soon I was crossing the Mississippi River and being greeted by Davenport Iowa.  The photo above shows my view of the Davenport skyline from approximately the state line on the double-decker Government Bridge in the middle of the river.

But let's go back a step.  That road walk into East Moline.  I did it on a Saturday.  The route uses Highway 84, Colona Road, because it's pretty much the only way to get across the Rock River into the Quad Cities other than on an Interstate highway.  Just across the Rock River from Colona is the town of Silvis.  And on the left is the entrance to TPC Deere Run Golf Course.

Now, I'm a casual fan of Golf.  I haven't played the game since the '70's, but I love watching it on TV.  What appeals to me is the serenity of people strolling in a perfectly manicured park.  They have microphones picking up the birds singing.  It's always so green and peaceful.  When my hiking route takes me past a golf course I often look in longingly, wishing the cart paths were part of my trail.  Sometimes they are.  The North Carolina Mountains-to-Sea Trail has an arrangement with the Indian Valley Golf Course along the Haw River near Historic Glencoe.  The trail runs right through parts of the course.  In Verona, Wisconsin, earlier this spring I followed the Ice Age National Scenic Trail as it runs through the University Ridge Golf Course, owned by the University of Wisconsin.  But today I was not expecting a golf course stroll.  The trail just follows the road past TPC Deere Run and continues onward.

But, as I passed (and I should have been aware of this), I noticed lots of activity, a big temporary admissions tent with pictures of famous golfers plastered on the front window, people getting off shuttle busses and going in, even though it was only 6:45 in the morning. 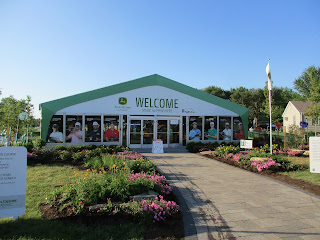 Well, I had not planned any spare time into my schedule, but I changed plans in a heartbeat.  As I suggested, it's sort of a bucket list item, and I knew I would regret it forever if I just walked by and didn't take the time to check it out and make it part of my Personal Continuous Footpath.

I paid my thirty bucks, checked my camper's pocket knife with security, and marched in, intending to do a circuit of the course.  Here was my chance to stroll a world-class golf course in the best condition it is possible to get a golf course, while rubbing elbows with famous players. 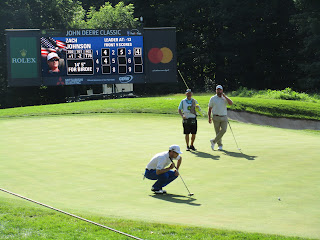 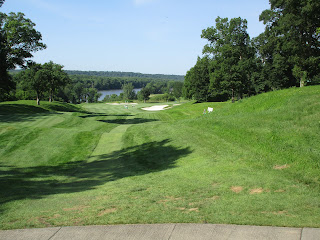 The course fronts on the Rock River (glimpsed in the photo above) and takes advantage of some seriously hilly terrain. 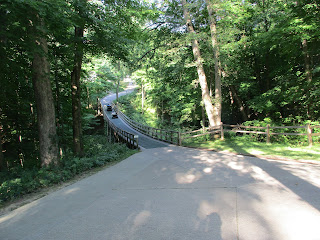 The 16th hole is the 'signature hole', featuring panoramic views of the river from the green. 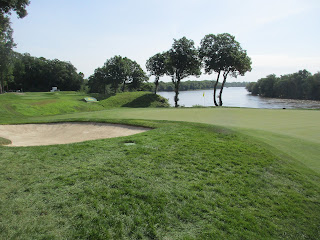 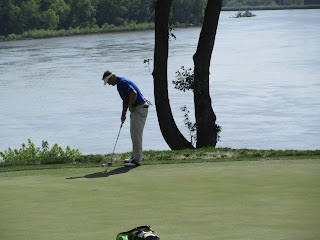 I walked the front nine backwards, and started early, coming to the 18th before any players had arrived. 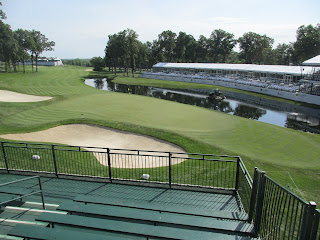 It was a brutally hot day, so I took full advantage of the many concession stands to hydrate with $4 bottles of ice cold sweet tea.  I actually finished my circuit before the leaders teed off, but I had miles to go.  By the end of the day I reached the Mississippi River at East Moline.  Next day would be all Mississippi River Walk, All the time, on both sides of the river.  Here is a sampling, starting with a look at the channel separating Illinois from Arsenal Island, with the bridge crossing in the far distance. 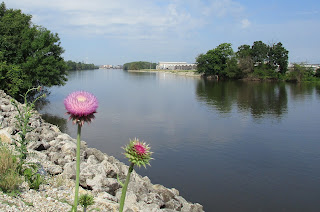 Here's Centennial Bridge as seen from the Davenport side 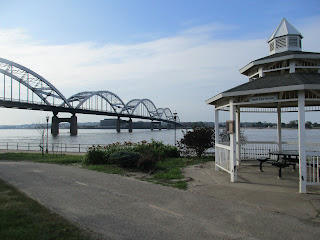 And here's the more laid back Ben Butterworth Park area back on the other side in Moline, Illinois 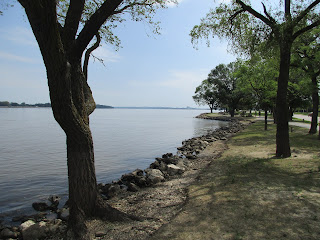 The river was very high.  This spring it had flooded at near record levels--the fifth highest water level ever recorded. 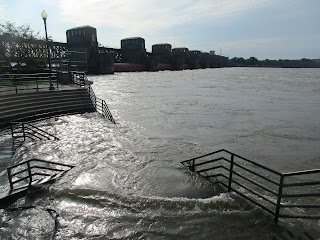 Wildlife, of course, didn't mind at all. 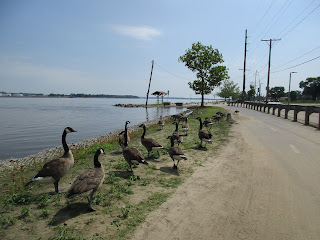 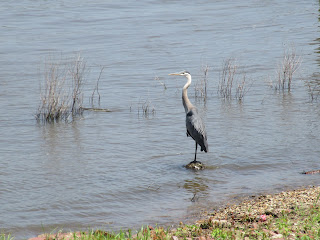 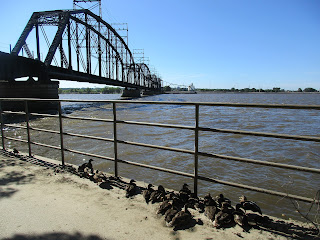 Nor did I.  Officially this road (part of the trail route) was closed.  I wonder why.  But no problem for the intrepid hiker.  It made for great wading. 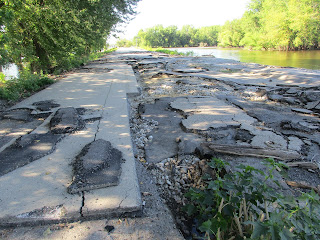 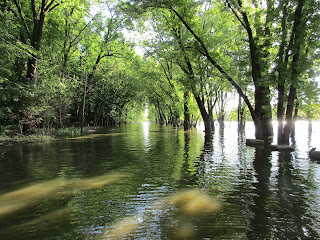 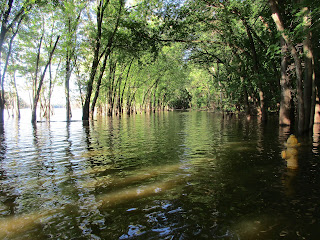 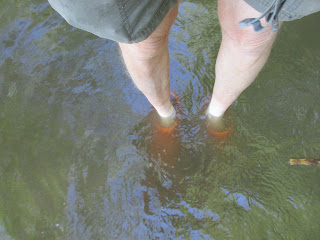 Finally on the third day I passed through the half-mile-long river-front park in the town of Buffalo.  It doesn't have bike trail yet, but again, no problem for those of us on foot. 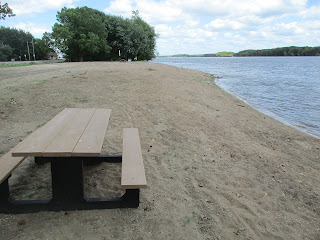 Here's the set of GPS Track maps covering days 36 through 38. 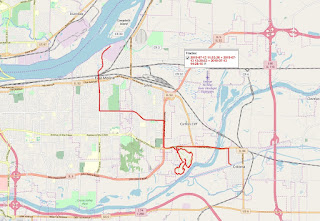 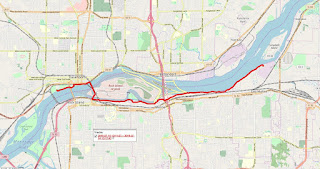 There's more River Walk to come, but not much.  Then, well you might say the trail starts to 'Hoover'.  But that's another story for another time.
Posted by PJ Wetzel at 3:32 PM