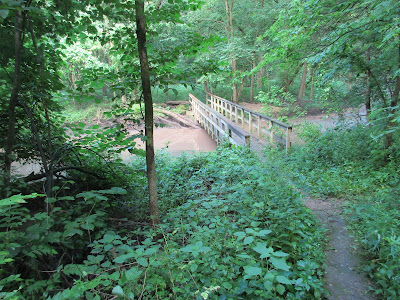 My hiking mission is about connections.  My wandering and meandering is underpinned by purpose--to get from A to B in the most hiker-friendly possible way.  I do not mind taking great detours, consider how I got here to Illinois from Pennsylvania--via the Upper Peninsula of Michigan!  Yes, I love and embrace the feeling that the wandering mentality provides.  But to get from A to B, in this case from Madison, Wisconsin to Fort Collins, Colorado, I'm keen on finding the best dedicated foot trail, or at least non-motorized trail, to get me there.

In terrain where natural beauty attracts the leisure-time walker, there are trails to be found.  But in country like this 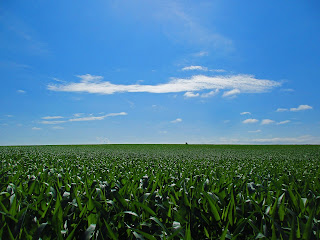 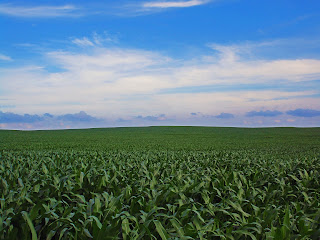 trails are harder to find.  Nearly every inch of the land has been put to practical use, and only the oddball walker like me takes the time to notice the beauty or to wonder what this vast landscape must have been like when it was still natural.

My current hiking problem:  Find a way across the cornfields of NW Illinois.

Those who have come before me have pioneered some routes across the Great Plains.  The American Hiking Society identified a route called the American Discovery Trail and publishes walking directions, though they offer no maps and this 'trail' is still mostly road walk in big sections.  In May (2019) the Rails to Trails Conservancy introduced a route called the Great American Rail Trail (GART) and published an interactive map.  It uses part of the same route as the ADT and I'm going to hook up with that route as it crosses north central Illinois heading into Iowa.  To get to it I considered picking up the route of the Grand Illinois Trail, which makes a 535-mile circuit around the northern third of Illinois and uses the above named trails for the southern section of its loop, but the part I would hike, around NW Illinois is nothing but a 'route' and is almost all on roads.

So that was my chosen solution.  It does 'meander', taking me south when my goal is to the west (Colorado), but it minimizes the amount of road walking.  It uses the Jane Addams rail trail across northern Illinois to Freeport, site of this little urban park where the second of the famous 1858 Lincoln-Douglas debates took place. 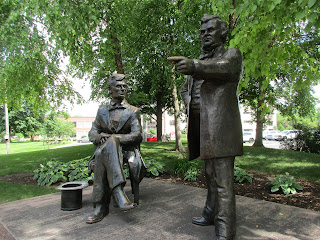 The Jane Addams Trail is well-loved by a dedicated local 'friends' organization who live near this seventeen mile gem, 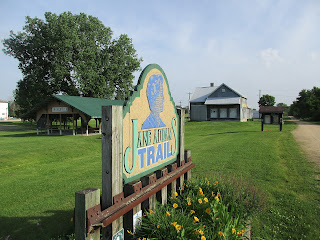 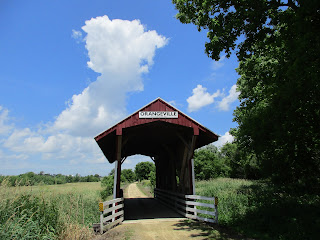 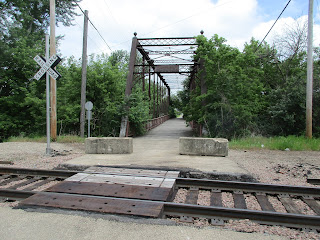 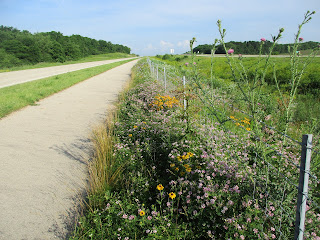 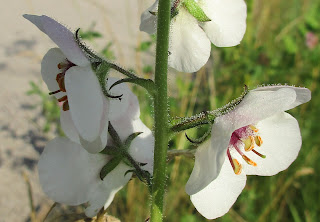 My route then makes use of the scenic Hennepin Feeder Canal trail, a part of the Hennepin Canal Parkway system that is left out of the GART because it runs North-South.  I pick it up in Sterling, Illinois.  There is 'only' a thirty mile road walk to bridge the gap between Jane Addams and Hennepin.

But here's where the photo up top comes in.  Along that thirty mile road walk is a network of well-maintained trails in the woods in the Oakdale Nature Preserve. 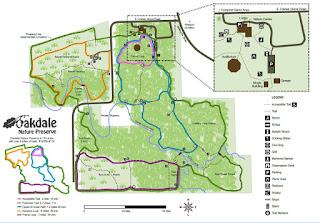 This report covers four days of hiking, including Oakdale, the part of Jane Addams south of Orangeville, and that road walk, done in three sweltering hot summer days, and passing through the southern part of Freeport then the towns of Forreston and Polo, where I touched base with Westside Park, and their immaculate baseball field with this enigmatic sign. 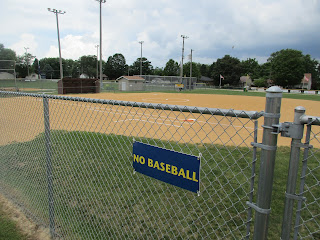 On the road coming out of Freeport, I couldn't pass up this 'infinity' view of a different sort. 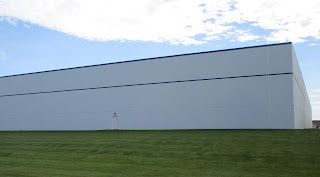 Near Forreston, there is another little patch of hiking trail in the Elkhorn Creek Biodiversity Preserve 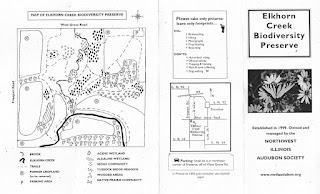 that I didn't use because to make it a through-hike from the NE to SW corners of that property, I'd have to do a bushwhack through some pretty thick brush and grass.  But its there, as is more potential trail through a pretty section of publicly owned Oak Savanna called Crane's Grove Nature Preserve, here viewed from the road walk along adjacent Cranes Grove Road. 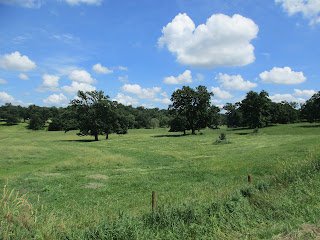 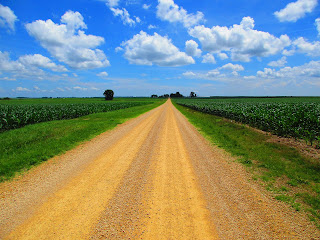 Road walking the open plains with the heat index in the mid 90's.  I do not recommend it.  But even here, in the unlikeliest of hiking venues, there is 'Trail Magic'.  As I came to one stop sign along the highway, the driver of an ice cream truck pulled over.  I pictured him breaking into his precious stock to offer me an ice cold creamsicle.  But his ice cream was probably all boxed in big cases and spoken for.  Instead he offered me a bottle of water from his personal supply.  Much appreciated, and I said so over and over before moving on.  'Trail magic' first class.

Here are the GPS tracks of these four days. 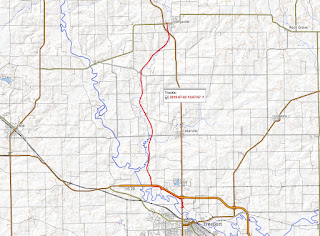 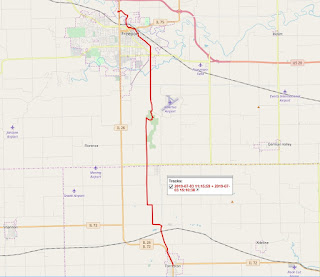 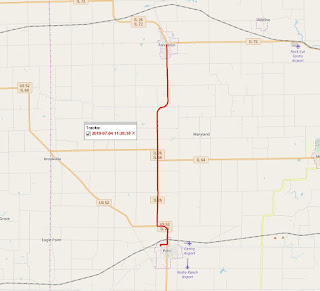 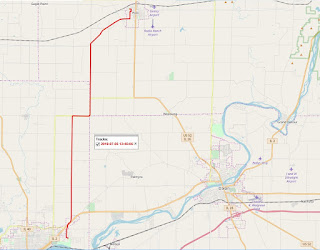 I know more of the 'infinite emptiness to the horizon' shots will be coming.  When nothing is interesting, you get interested in it.