Hiking cradle to grave, with a stop at Uranus along the way - the comprehensive report 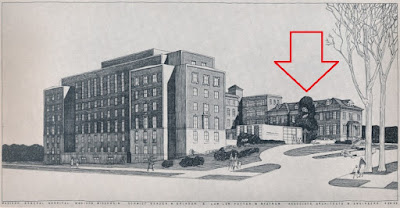 In my last report I revisited the home where I took my very first steps.  In this report I return to the spot where I took my very first breath.  It was at Madison General Hospital, now called Meriter, owned by Unity Point Health, 925 Mound Street in Madison, Wisconsin.  I know I was born there not just because Mom and Dad said so, but because I have in my possession the original hospital bill covering my delivery and my Mom's hospital stay, and it has the address on it.  The entire bill, covering nine days in the hospital, totaled a whopping $58.90. 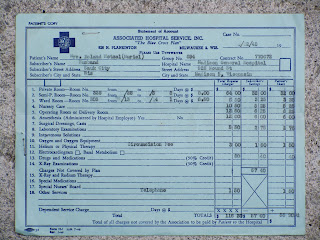 The hospital has undergone several major expansions since I was born, so it was a challenge to try to roll back time and determine what parts were existing when I was born.  Staff there suggested that the 'old East Wing', now just housing offices, was probably the place, but after digging through information available online, I discovered the architect's rendering shown above, dated April 1949, which conclusively proves that what is now the 'east wing' was an 'addition' not yet built at the time I was born, so one of the older structures in the background of the drawing (red arrow) has to contain the actual room where I came into this world.  Most of those structures are still there, though I can't be certain that the room I was born in still exists.  I had to satisfy myself with circling the entire block, creating a perimeter through which I, as an infant leaving the hospital, would have had to cross.

My walk to Meriter culminated four days of hiking various short segments of the Ice Age Trail, and then some bike paths that come to within a couple blocks of the hospital.   Here are some of the highlights, day-by-day:

After leaving my Sauk City childhood home, where I was also probably conceived, I walked busy US 12 for a half dozen miles until I returned to the Ice Age Trail at the Springfield Hill trailhead.  There I resumed the Ice Age trail route via road walk to the Indian Lake Segment. 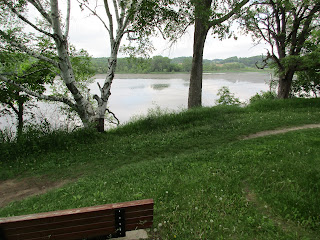 That meandering segment features a nice walk beside the south shore of the lake and a route among cross country ski trails through the dense mature woods southeast of the lake.

More road walking took me to the new Liebetrau Segment, which is a pretty useless bit of Ice Age Trail, because it is not a through trail but an out-and-back stroll with a loop at the far end that dips into a woods.  But most of this segment is open grassy meadow. 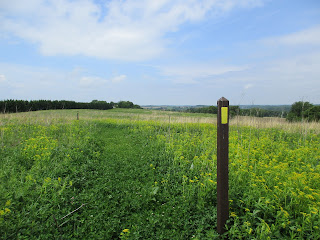 Another short road walk took me to the Table Bluff segment, a pretty walk through open areas and oak savanna, ending in a descent off the bluff into the town of Cross Plains.

Cross Plains is the location of the Ice Age Trail Alliance headquarters building. 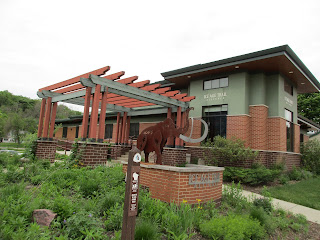 At the end of the day I dropped in for a nice visit, asked a few questions, and learned about a newly opened section of trail south of town - So I added that to the following day's agenda.  Here's the GPS Track for Day 18: 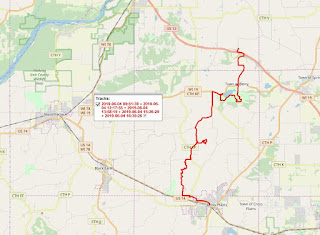 Colorado or Bust, Day 19 took me through the Cross Plains segment, now consisting of two parts separated by a walk past the HQ office.  The northern Hickory Hill part was very pretty, traversing some nice hilltop prairie and a woods along a steep slope.

South of town the new trail ascends to a ridge and courses through mixed pine plantation and hardwood forest and some open meadows.  Here's the prettiest spot, by my estimation: 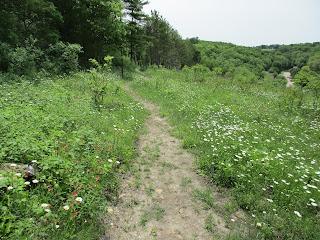 From there, it's more road walk down to the site of an important future segment, not yet built, through a complex of lands owned by the State, the National Park Service, and Dane County.  The Cross Plains Interpretive Site has loop trails that are planned to become part of the Ice Age trail, and across the street the undeveloped Cross Plains State Park has some really pretty trails that meander between two access points.  Because there is an 'in' and a different 'out', this is a 'through trail' and so I walked it and was super glad I did.  It offers some pretty mature white oak savanna and a view of the quarry pit called Lake Katherine, that I passed on the road walk: 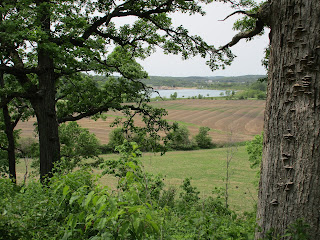 Here's a look at the GPS Track for this day. 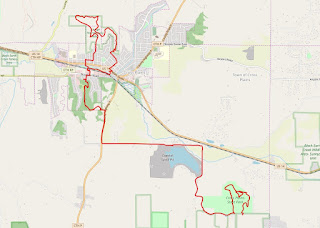 Colorado or Bust, Day 20 took me to the west suburbs of Madison.  I first hiked the cute little Valley View segment, wedged among upscale suburban homes.  Here is its signature feature - a view from a high meadow out over the valley of the Sugar River. 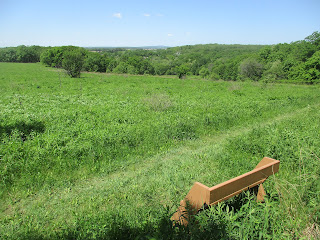 Nice wildflowers along this little segment too: 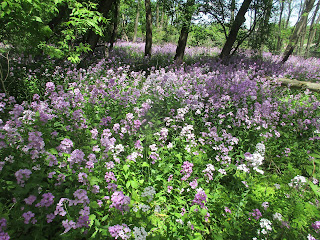 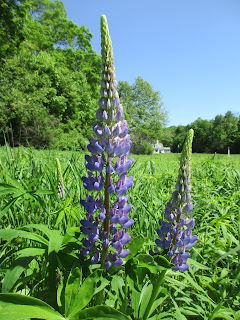 A short road walk took me to the Madison Segment, which is entirely within a University of Wisconsin public golf course.  Then came the Verona Segment.  It is a mix of meadow walking, a bit of woods walking, and a stroll alongside a soccer complex.  A new footbridge crosses busy McKee Road. 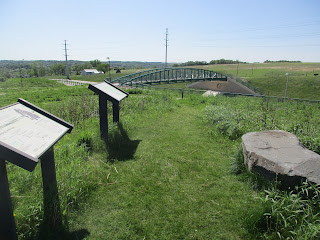 I only walked half of this, north of where it briefly shares a course with the Military Ridge State Trail, a paved rail trail used more by bicycles than hikers.  Here I turned east where the Ice Age Trail goes west.  East lies Madison, and my walk to the hospital.  This trail features a scaled-down version of a walk through our solar system.  In this version, the hiker is traveling at roughly the speed of light, and I was whizzing past Uranus, and later Saturn and Jupiter, on Day 21. 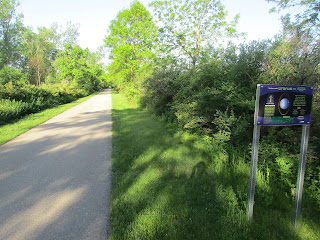 The 'sun' is supposed to be an orb about 24 feet in diameter at this scale, and is located at the end of the Southwest Commuter Path in downtown Madison.  I didn't get that far, because the hospital is somewhere between Jupiter and the Asteroid belt.  But I'm getting ahead of myself.  Here's the GPS Track for Day 20, which brought me to the Quarry Ridge mountain biking park: 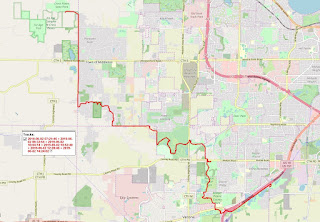 Short day, walk along very pretty and very popular bike paths into downtown Madison.  There was even a glimpse of the state capitol dome as I got close to the hospital. 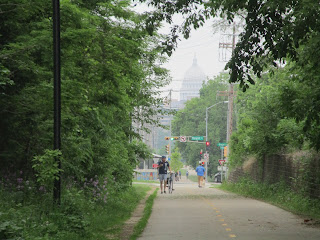 And, of course, I passed Saturn: 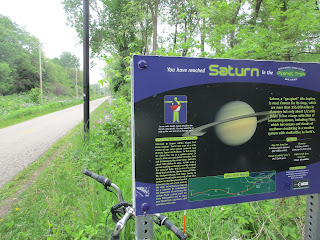 The route took me to the east end of the Military Ridge Trail, which the Fifty Trail uses in its entirety to take the hiker toward Iowa, and the north end of the Badger State Trail, which I will be using to head south into Illinois where I'll link up with the Hennepin Canal Parkway State Trail, which coincides with the American Discovery Trail and the newly established Great American Rail Trail.  I'll be picking up the Fifty Trail route in the opposite direction there to head into Iowa.  But I'm way ahead of myself again.  The point here is that six different paved bike trails, including the Military Ridge, Badger, and the Southwest Commuter Path that I took into Madison, converge at a unique 'Velo-Roundabout' in the suburb of Fitchburg. 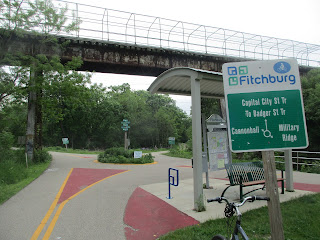 Madison's population is probably the most bike crazy in the country.  As I walked toward the hospital, which is near the university, virtually every house had four or more bicycles chained to porch railings or private bike racks in the yard.  Seems nobody drives here.  Well, at least not in summer. 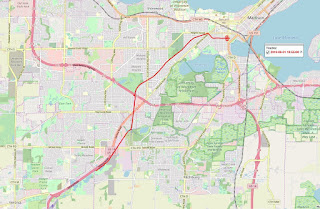 So now I've completed my mission in Wisconsin.  Now its all hands to the pump, all eyes on the final prize--the four places I lived in Fort Collins, Colorado between 1970 and 1980.

I've connected every place else that I have called home, cradle to grave.  Yes, that includes my final resting place, this cemetery plot in New London, PA, 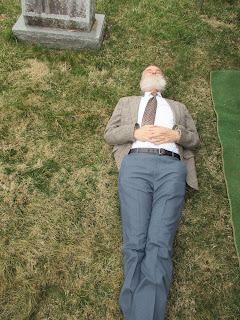 I'll be right next to Mom, Dad, brother Jim, and my Grandma Ivis, God rest all their souls. That's grandma's gravestone in upper left and the mat set down at Mom's grave site.  Photo taken the day of her funeral.

The thought can make me a bit misty-eyed.  I'm the only one left to soldier on.  A lonely trekker, with no-one left to ask about my deep past, no-one who could answer the many questions I have about the house in Sauk City, no one with whom to share fond memories of times in the woods, like the 1963 father-son Canoe Trip to Canada's Boundary Waters Canoe Area Wilderness, or the 1965 family hikes through Yosemite Park, or lazy summers meandering the woods and fields surrounding my 1958-66 home on White Clay Creek National Wild and Scenic River.  Sheez - I could go on and on ...