Major Milestone - Hiking Home to where I learned to walk 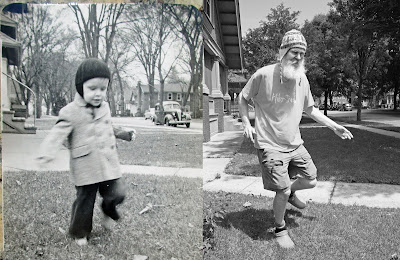 I've arrived at 713 Jefferson Street, Sauk City, Wisconsin.  In the left panel of the photo above, taken in the fall of 1950, a 2-year old little me was taking some of his very first steps.  Today I came back and reproduced those steps, and documented it with the help of professional photographer Doug Stamm.

The house looks much the same as it did then. 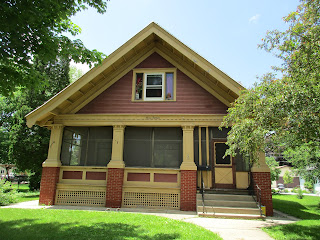 The old wooden steps to the front porch have been replaced by concrete steps.  Notice, in the 1950 photo, a brick house down the street, behind the 1930's automobile.  That house was built in 1851, probably half a century before the other houses along this street.  And in a stunning coincidence, it just happens to be owned, for the past seven years, by the above mentioned Doug Stamm, pro photographer and author, specializing in underwater photography. 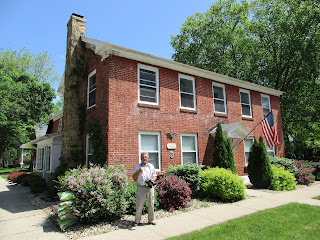 When I contacted Doug about meeting me to do a photo shoot, he was more than happy to do so.  He's retired, having been a researcher at U. Wisconsin.  He's within a few months of my age.  And he was as intrigued as I was at the coincidence.  His travel expenses?  Zero.  His fee?  A six-pack of Heineken!

As I arrived in the neighborhood and passed my old house, I noticed a woman coming out the door, so I quickly pulled over and called to her.  She was nice enough to stop to talk.  Her name is Mary and it turns out that she is the mother of the owner of the house.  She was able to give me permission to tramp around the yard and take the photo that would reproduce the one my father took in 1950.

I hurried down to Doug's house and knocked on his door.  Our appointment was not for two more hours, but he was free so we did the photo shoot right then and there.

There's now a small tree planted near the precise spot where little PJ was frolicking, seen at lower left here, 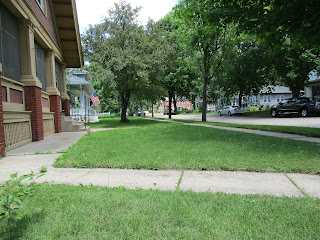 so we had to shift the position of my pose a little to the right, as viewed, and of course the street trees had changed - the stately old elms in the old photo have all succumbed to Dutch Elm disease - and the leaves were out.  But Doug's house is still visible in the background, and the multiple roof-line of the next house down, behind my former house, is also the same as it was back then.

My Mom and Dad and I lived in the upstairs apartment, accessible by a stairway in the back. 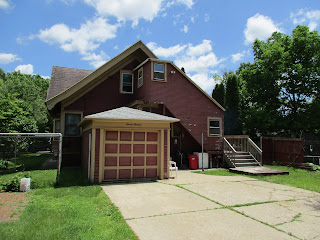 The apartment was rented to us by Mr. and Mrs. Grabill, the owners, who lived downstairs.  Here's a photo of me with 'Grandpa Grabill' taken a few years later, when we returned for a visit. 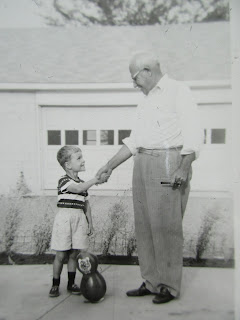 Doug was patient and willing to do what it took to get the shot right.  We went back to his house and he downloaded the crop of photos he took to his laptop and scanned through them.  None of them were 'just right,' so we went back for a second try.  Finally we got the pose about as close as we could, given the position of the bush and the slight difference in my stature between then and now.

We returned to his house, picked and processed the best photos, and Doug loaded them onto a flash drive I had brought along.   Then we headed over to the liquor store and I bought Doug his compensation, ice cold, to be shared with a gathering he had scheduled for that evening.  We bade each other farewell and I headed off to complete my day of hiking.

After that memorable milestone, the rest of the day seemed like an anticlimax, but it was a pretty day.  I hiked US 12 - the road my father drove every day, commuting to his graduate school work at the U of Wisconsin Madison.  It's now a busy 4-lane divided highway, but here's a shot of a bit of the old original road. 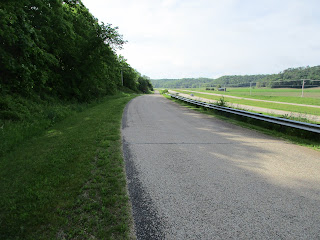 Not only is that my Dad's commuting route, it's also the road I took home from the hospital in Madison a few days after I was born.  I'll be sharing my visit to that hospital, then called Madison General, in a coming report.

Just a few blocks north of 'my' house, an old railroad grade crosses Jefferson Street.  It was probably still in use in 1950, but now it's part of a paved rail trail, that starts just a few blocks away in 'downtown' Sauk City, and runs north out into the prairie, through a Wildlife preserve and bordering the HoChunk First People's Reservation.  It's called the Great Sauk Trail, and I reported about most of that hike in my previous post.  Here's a shot of one of the trail's distinctive mile markers with the Wisconsin River as backdrop. 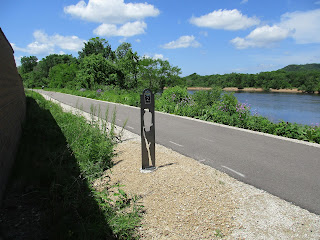 It was a very pretty day, getting hot in the afternoon, and I was feeling all warm and fuzzy from my close encounter with the distant past.  Here's the GPS Track for the day's hiking. 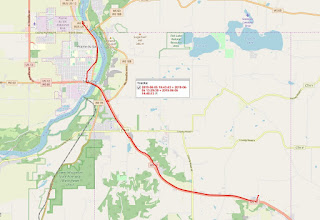 I am grateful for the good fortune that this oldest of my previous homes survives intact, as do all the others.  I suppose I should be grateful that I never lived in Tasmania, or hiking a continuous footpath would have been out of the question, though I'm sure I would have come up with some other hiking project in its place.  Now all that I have left, not yet connected, are the four places I lived as a graduate student in the Fort Collins, Colorado area.