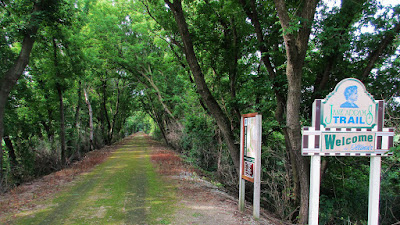 My hike North to South across Wisconsin has been a trip.  It started in the fall of 2017 at the western terminus of Michigan's state-wide Iron Belle Trail in the twin border towns of Ironwood/Hurley.  I was chased off the trail that fall by snow and cold late in October somewhere near Wausau.  After a seventeen month hiatus, I came back and picked up where I left off and have now ended the Wisconsin 'traverse' at the northern terminus of Illinois' Jane Addams Trail in the midst of the worst of midsummer heat and humidity.

My Wisconsin sojourn largely followed the Ice Age National Scenic Trail through the heart of the State, but it made use of many lesser known Trails to connect.  Here in southern Wisconsin, that connecting trail is the Badger State Trail.  It's a rail trail, so open to bicycles, as is its extension into Illinois.  Even the Ice Age Trail makes use of it in several significant segments, including the walk through the quarter-mile Stewart Tunnel, hands-down the highlight of the trail. 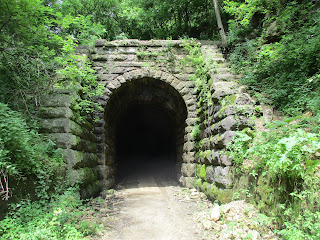 The day I walked through was hot and humid, and inside the tunnel it was wonderfully cool, but foggy.  The fog is visible here spilling out into the sunshine. 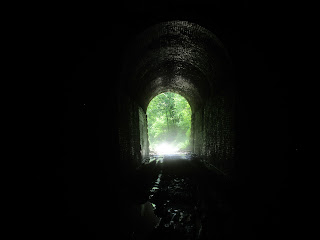 The Badger State trail has mostly a crushed limestone surface, but the northern several miles of it are paved, from its terminus at the 'Velo Roundabout' where it connects to several other trails including the one to my birthplace in Madison, covered in the last report.

There are spots where the trail is out in the open with expansive views, high and low, of valley and stream, 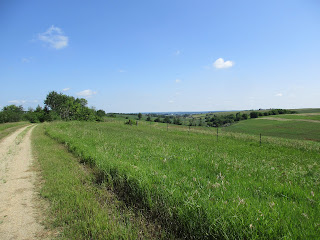 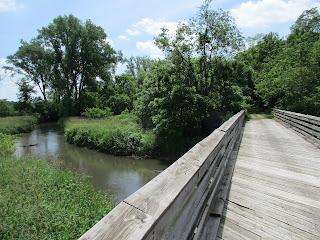 and of the ubiquitous farmland.  Here a specimen oak stands vigil over a soybean field 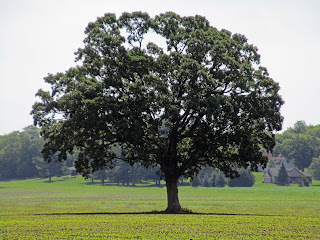 Then there are serene shady spots where the trail cuts through forested hills. 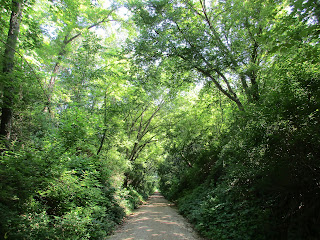 Finally the moment had to come when I said Farewell to the Ice Age Trail. 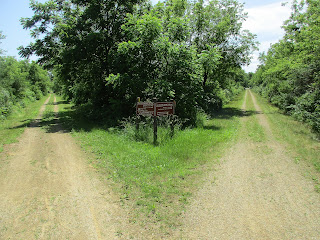 It goes left, following the Sugar River State Trail, and I took the right fork, staying on the Badger Trail.

Twice in the days covered in this report, I was being chased by nasty thunderstorms and barely finished my day's  hike before being hit by storm-force winds and blinding downpours. 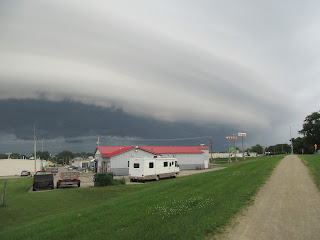 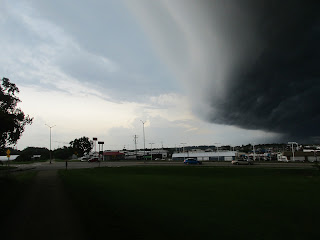 The small things along the way break up the long straight stretches that are inevitable on rail trails.  On these days they included Flowers, Fungus, and Foliage, namely some 'Fairy Triangles' spotted in trailside clover (to complement the fairy circles shown in an earlier report). 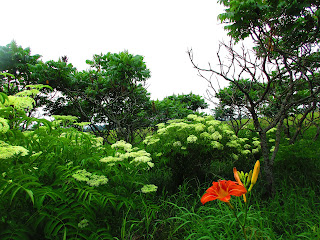 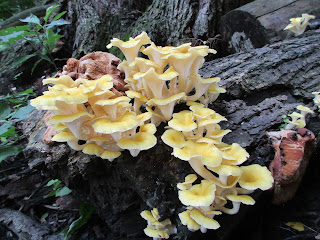 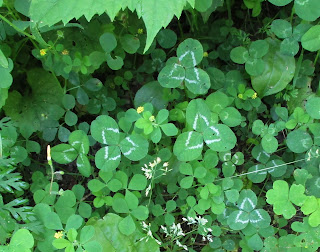 Here are the four GPS track maps for these four days, which took me from the suburbs of Madison, Wisconsin, to the little town of Orangeville. 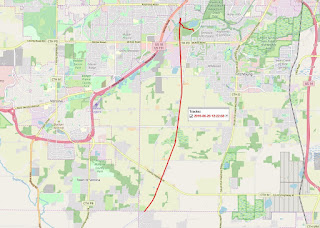 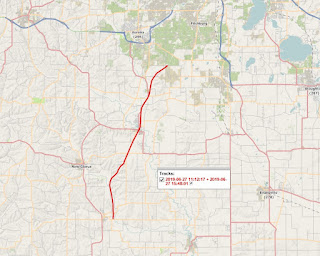 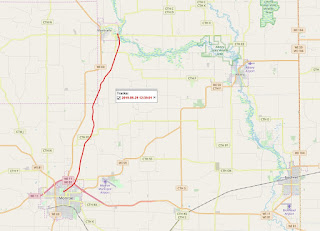 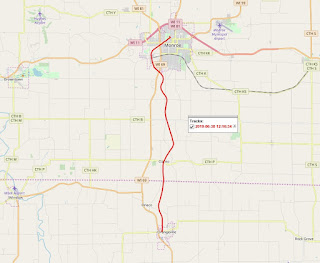 From Orangeville I continue south to Freeport where the Jane Addams Trail ends.  There actually is an abandoned rail bed that stretches south out of Freeport to the Rock River at Dixon, but most of it has been taken over by private owners, it appears, and probably won't ever be made into the needed connecting trail.  So instead I'll be walking roads and a mile of pretty foot trail in a Nature Preserve to bridge the thirty mile trail gap between the Jane Addams Trail and the Rock River where I'll pick up the Hennepin Canal Feeder Trail.

Once I'm on the Hennepin trail, I'll turn west to join the route of the cross-country Great American Rail Trail and the older coast-to-coast American Discovery Trail (which coincide here) west into and across Iowa and into Nebraska.  These are the only trails that connect the multitude of hiking opportunities in the Rockies with those in the eastern US.  So I'm taking a deep breath and launching out into the vast flat expanse of the Great Plains.  One step in front of the other.
Posted by PJ Wetzel at 3:29 PM