The Hennepin Canal was a late comer, and never a commercial success.  It was completed in 1907, long after trains had taken over most of the work of heavy materials transport, and at a time when the automobile and truck were beginning to replace the train.  The canal was closed to commercial traffic in 1951.  All maintenance stopped.  But almost immediately a grass-roots 'Save the Canal' campaign began.  The state of Illinois took full possession of it all in 1970; and as a result the canal remains well preserved.  Unlike other famous canals I've hiked, such as the Miami and Erie Canal in Ohio and the Chesapeake and Ohio Canal in Maryland, this canal remains a functioning waterway along its whole length, and can be paddled and enjoyed as a continuous waterside hike.

Some of the interesting preserved features are two 'lift bridges' located at locks, where the road bed was 'cranked up' to lift it out of the way while barges passed, 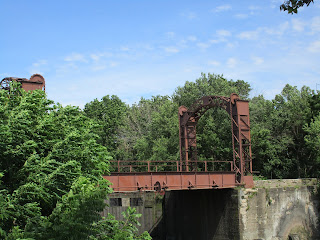 Most of the locks exist, including the original wooden gates and some of the original lock opening hardware is preserved. 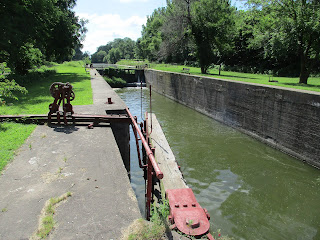 One early 20th century truss bridge remains in place.  Looks like a flimsy structure, certainly not for trucks of heavy farm equipment.  This particular bridge now goes nowhere.  The construction of Interstate 80 nearby means that it is now a bridge to nothing but a field next to the interstate. 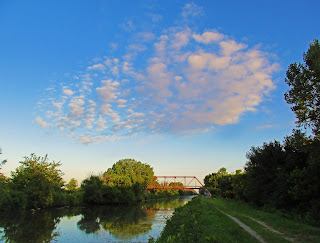 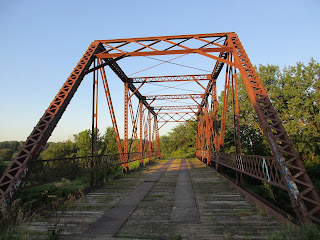 Six of the original nine concrete aqueducts survive--places where the canal crosses a major stream via a 'bridge'. 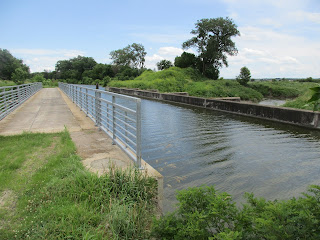 One of the aqueducts that has not survived crosses the lower Green River not far from the Mississippi.  The Green River is a serious river there, and floods over the years have plagued the canal.  Currently the Trail is 'officially' closed, near that former aqueduct because of a major washout during the big Spring 2019 floods.  As I hiked through, a section of the canal levee was gone, washed away, but the route through the breach was dry.  Every time it rains, however, the ranger at the visitor center warned me, this spot washes over and floods and may be impassable due to swift current. 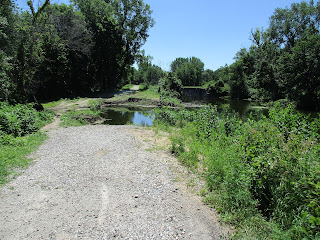 Hiker take warning.  At the visitor center they suggested that it may be a long time before they have enough money to make the repair.

Elsewhere, the trail remains in great shape, and is reasonably well maintained by mowers. 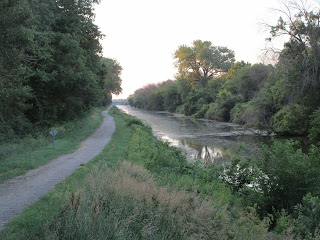 85% of the trail I hiked is paved, but there were a few grassy sections of overgrown crushed gravel. 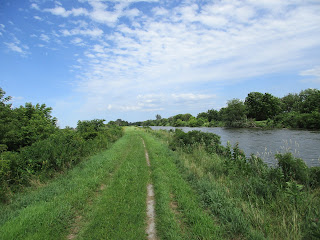 Hiking waterfront all day, day after day, is a treat.  My encounter with the patch of American Lotus (Nelumbo lutea) in full bloom, with its giant 'lilypads' was an unexpected surprise. 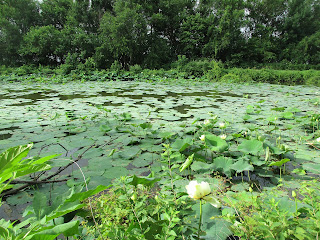 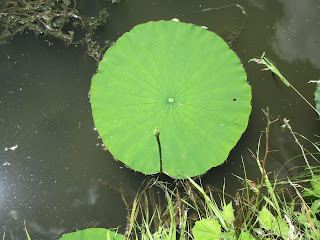 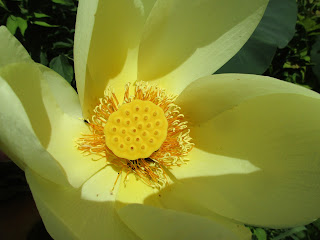 Other summer flowers provided canal-side 'splashes' of color too. 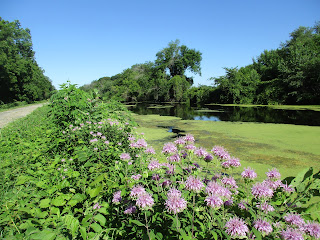 But who would have expected a genuine 'sock puppet flower'??? 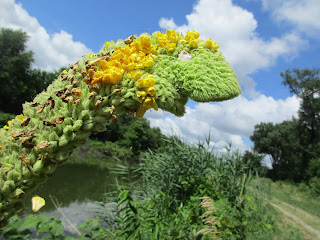 Rare sighting indeed.  Here are the GPS Tracks for these three days of hiking the canal. 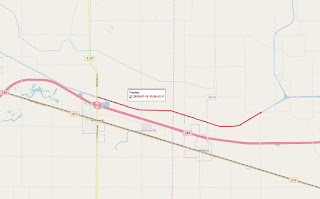 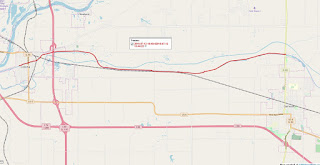 On Day 35 I reached the place in the town of Colona where the trail leaves the Hennepin Canal and heads into the Quad Cities, first to the Rock River and then to the Mississippi.  Flooding there has also been a problem this spring.  The result:  I got a chance to hike *in* the Mississippi.  Stay tuned for that report, coming soon.
Posted by PJ Wetzel at 3:18 AM