Three and out - farewell to the beach 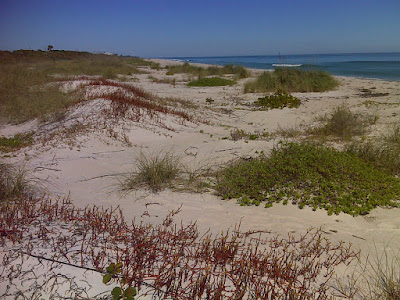 Except for a couple miles of concentrated development, central Florida's beaches (Cocoa Beach to Jensen Beach) are remarkably quiet, especially when the weather is chilly and the water temperature is in the mid-60's.  I often walked for a mile or more without seeing another person.  I like it that way - just sea and sky and sand and the sound of the surf.  For me it clears the mind even better than walking in the woods.

Ninety percent of beach goers don't walk much, so people tend to concentrate within a few hundred yards of a public access point.  The average spacing between public parking was about a mile and a half, longest gap was just under six miles.

In this report I'm covering four days of hiking - the last three beach hikes and the one that took me inland following the St. Lucie River/Canal.

It was a windy, chilly day--too cold for beach going.  Look at this up-scale resort.  They've thrown their party but nobody came.  This was early afternoon, mind you - peak sun bathing time - and the sun was strongly shining.  Problem - wind raking down the beach with air temperature barely making it into the low 60's. 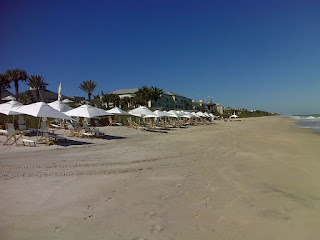 Vero Beach has a boardwalk that is nearly four tenths of a mile long, so I walked that instead of the beach. 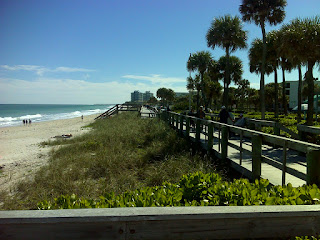 At high tide there was another place where homes were built with sea walls so close to the surf that I couldn't walk it, so walked the bike path along A1A for a mile and a half.  Even where there weren't sea walls there was evidence of beach erosion.  In places the 'sand cliffs' were ten feet high.  Here's one creative solution to the resulting beach access problem: 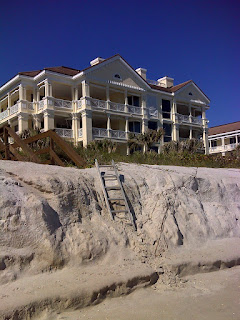 Now here's a map of this day's hike:

This was the one 'chamber-of-commerce' beach day I had.  Mid to upper 70's, patented Florida Sunshine, and light winds.  I found a rare piece of old black sea glass ... note the bubble, indicating the early technology used to produce this. 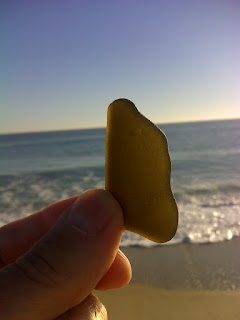 And I found this miniature under-sea rock-garden.  Love it! 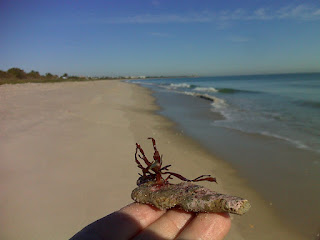 To get from North Hutchinson Island to S. Hutchinson you have to go inland - there's no bridge over Ft. Pierce Inlet.  Here's where I ran into these pelican beggars. 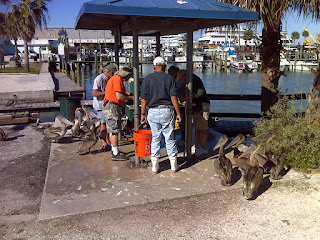 So what's missing from the photo up top?  Waves!  I lived on the ocean for four years - had a direct view of the surf from my living room.  I have never seen the ocean this calm before.  There were little breaking waves making little swooshing sounds, but I've seen ponds with more surf!

There's a nuclear power plant here, situated where the sound and the ocean are just a few hundred yards apart, but they let you walk by it on the beach.  There's a nude beach too - the 'warning' signs on the dune at the cross-over don't do much good if you're passing through on the beach and don't use the cross-over.  For more info (text, not photos) see The Friends of Blind Creek Beach/Treasure Coast Naturists web site.

The day started out calm, but a cool front pushed in soon after sunrise and brought a lot of wind and rising surf.  By the time I said my final good-byes to the beach and walked the causeway over to downtown Jensen Beach the wind was whipping. 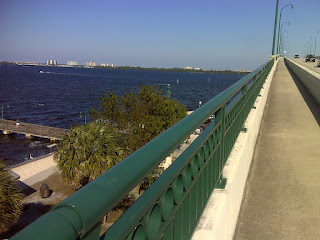 High tide was in the middle of the day today.  When the tide is low and you walk near the surf the sand is firm underfoot.  Not so above the high tide line.  Not only was I walking into a stiff headwind, I was pushing my feet through the soft sand.  It felt like walking uphill!  An exhausting day.

Today I walked part of the East Coast Greenway. 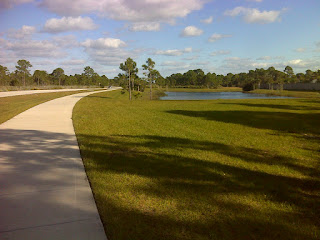 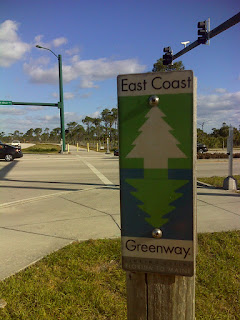 If I understand their map correctly, the ECG takes the causeway, shown above, out to South Hutchinson Island and then follows the bike path that runs beside A1A the entire length of the Island.  South of there it has to come inland, as does A1A.  The part I walked is new.  It follows a road that is not even shown on my 2012 DeLorme Florida map.

I do not know for sure how the ECG crosses the St. Lucie River, but it's probably on the new US 1 bridge. 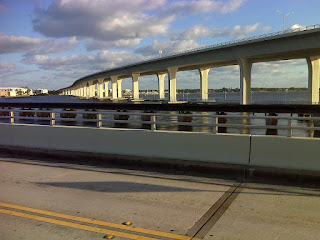 I took the old route over the drawbridge, passing through the touristy center of Stuart, and then down highway 76, which heads southwest toward Lake Okeechobee.

The weather was breezy but warm and sunny until the clouds rolled in late in the afternoon and brought a few sprinkles.  Liquid sunshine!

By the end of the day I was west of I-95 and the Florida Turnpike, back out in open country, and walking on grassy shoulders.  Lots more of that ahead, I'm sure.


Here's the last of the four route maps: