Seminole State Forest in the fog

The hike through Seminole State Forest would have been a delight under any conditions, but I'm glad I did it in a persistent morning fog.  For me fog has the enigmatic effect of increasing the focus on objects I pass. 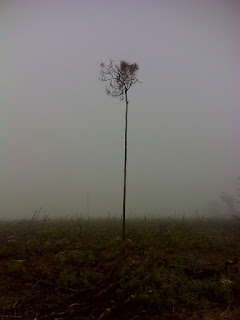 It's because the backdrop is hidden.  All you see is the object.  Seminole State Forest has lots of low scrub.  It looks like nearly all of it was man-made from older growth Sand Pine that had been clear cut, or almost clear cut in the case of the photo above.   Undergrowth of scrub oak is then allowed to take over.  In slightly wetter places, which Seminole has, Saw Palmetto takes over as the ground cover.  Here's another fog-enhanced shot in that setting. 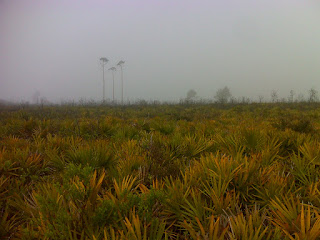 The forest managers were continuing to create more scrub habitat, presumably with the Scrub Jay in mind.  Here they had recently 'nuked' a huge field except for a narrow corridor for the trail.  A huge bulldozer had pushed over all the trees, and then they burned everything.  All the trees to the left of the trail had been pushed forward in the direction I was hiking.  To my right all the trees had been toppled to the ground pointing back the way I had come.  It looked like the shock wave from a nuclear explosion had ripped everything down.  Add the fog to this setting and it was one of the most bizarre settings I have ever hiked through. 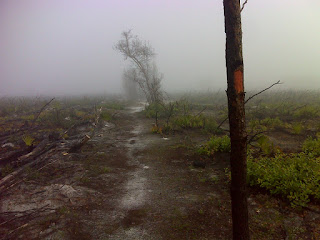 Their efforts are working.  I *did* see a pair of Scrub Jays.  The photo below was taken with my low resolution GPS camera so the bird doesn't show up too well, but you can see its outline. 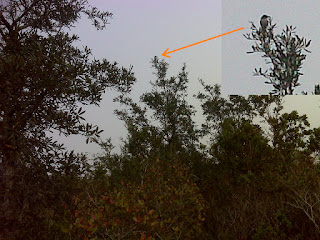 Returning to my theme about fog increasing focus on things not normally noticed.  Spiders make their living spinning traps of gossamer thread meant to be invisible to near-sighted insects.  As shown in the headline photo, fog droplets can blow the cover of even the daintiest web.  In this scene the fog has transformed all the bowl-and-doily spider webs from invisible traps to gaudy decorations: 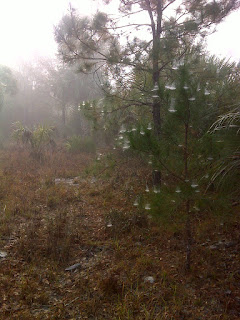 By noon the fog finally did clear up and it became a bright sunny warm day.  I had passed out of the scrub zone by then.  I crossed the serene tropical Black Water Creek ... 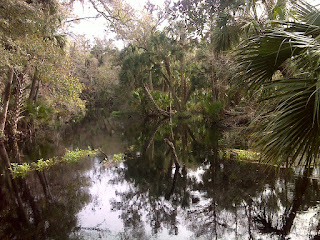 ... and then I walked along the side of the valley it cut through the deep sands of this area.  The steep sandy slopes always provide a tremendous diversity of plant life, especially where the slope faces northward, keeping the microclimate cool.  There I ran across a spectacular display of fall color in early February on a big old pignut hickory--a species that is at home much farther north. 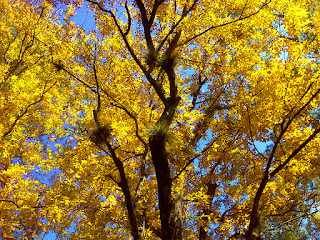 I'm used to seeing this kind of display (minus the bromeliads) in late October where I grew up in Pennsylvania.  But I'm finally coming to understand that here in central Florida the trees delay their autumn leaf drop until they are ready to bud out with new spring leaves.  Many other mid-Atlantic deciduous species were doing the same thing.

I finished today's eighteen miles of hiking by beginning the walk on the paved Cross Seminole bike trail.  I passed one of its iconic sights--the 'paint the trail' wall, covered with panels that mostly featured pop icons and comic book heroes. 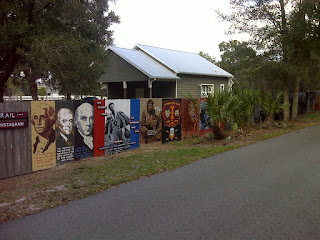 All of the art was very well done, and worth lingering to give it a close look.  The Cross Seminole Trail is yet another change of pace for the Florida Trail.  I love the diversity.  This is an urbanized area on the north and east side of the Orlando Metropolitan Area--an area that reminds me very much of the greater Los Angeles area.  Much more on this in tomorrow's report.


Here's a map of today's walk, including links to more photos.