Key Largo - in search of the Keys 'vibe' 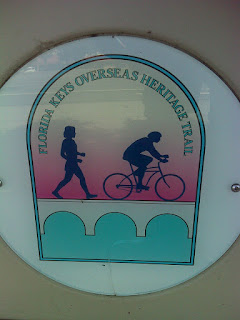 Today, after ten miles of US 1 causeway, crossing over this high bridge, I arrived on the Florida Keys and started along the Overseas Heritage Trail. 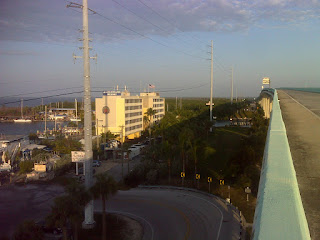 The town that greeted me (and the island) is Key Largo.  The trail follows beside the highway at the backbone of the island.  I could see no emerald blue water, no serene beaches, no upscale resorts, only urban noise, clutter, and congestion of the sort I can find anywhere in the US.  It did not feel like a resort community, let alone the unique one that is the Florida Keys.

The best part of the trail was at the entrance to Pennekamp State Park.  The landscaping and decorative heavy fence lasted only a few hundred yards. 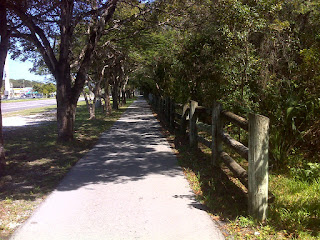 Otherwise the trail itself was nothing but a roadside bike path of the sort, once again, that can be found in urban settings all over the US.

I was looking for Poisonwood in order to get myself thoroughly familiar with this plant, so that I could avoid it.  Finally I spotted some, stopped to study it and memorize the blotchy bark pattern, the shiny oval leaves with prominent yellow center vein and closely spaced step-ladder-rung side veins. 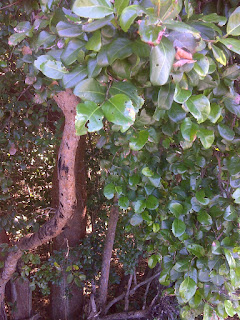 Poisonwood protects itself with the same chemical that poison ivy has--it can give you a horrendous itchy rash that lasts more than a week.  I wanted to be sure that when I stepped into the woods to take care of business or to bushwhack to a view of water, that I wasn't making contact.

Satisfied that I could avoid Poisonwood, I returned to the search for the elusive Keys 'vibe'.

The Keys promote themselves as having a Caribbean flavor.  Perhaps that means different things to different people, but I wasn't feeling it, and never did today.  The closest I got was when I crossed the first canal, cut deeply into the coral bedrock. 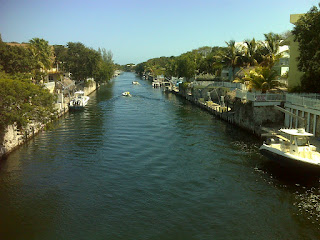 That was at least distinctive.  The sheer vertical walls of coral were incorporated into the 'landscaping' of the various residences.

One other thing that promised a resort feel was the mile markers--in this case the distance from the southern end of US Route 1.  Plenty of vehicles sport the green 'Mile 0' sticker, indicating their love of Key West.  I'm familiar with the importance given to mile markers on many east coast beaches.  Today I got as far as Mile 100. 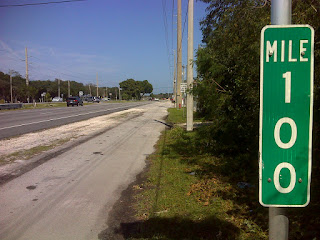 And that's where I had to stop, never getting the 'vibe' I was expecting.  Note the bike path beside the marker--pretty ordinary.  Maybe tomorrow.


Here's a map of the path I took today as I reached the Keys, with links to more photos: