The Cross Seminole Trail and a moment that defies all odds

Imagine you're walking through a town you've never visited before and where nobody that you know lives.  What are your chances of running into a friend?  What about two friends?  Three?  How about four?

Today, as I was tramping through the historic town of Oviedo, northeast of Orlando, FL., I ran into five people who I call friends.  The odds of a Florida blizzard were probably greater, or of a sink hole opening up under my feet.  Heck, there was a better chance of being struck by a low-flying pig, right?

Not when you're on the Florida Trail and the people you meet are Trail People.

Consider this.  Normal people live in a three-dimensional world.  They might be found just about anywhere.  Not so for trail people.  They tend to live in one dimension - that long crooked line called 'The Trail'.  Rarely are they far from it, and when they gather, that's where they're likely to gather.

The town of Oviedo is a Florida Trail town.  And in Oviedo the Town House Restaurant is one of the most popular hiker stops.  The back patio of the Town House is on the trail.  It was a balmy sunny afternoon when, unknown to me, these five friends had arranged to have a late lunch at the Town House and had congregated in the patio after lunch ... just as I came walking by.

Five familiar faces in an unfamiliar place.  Wow!  The meeting place is an expected one -- a hiker gathering place.  Only the co-incidence of our timing defies the odds.  They might have lingered on the patio for fifteen minutes at most before heading home.  Needless to say that time got extended.  We had a wonderful half hour of conversation and exchanged photos.  What a memorable trail moment!

The part of the trail that Oviedo sits on is also part of the Cross Seminole Trail, so named because it crosses Seminole County roughly from NW to SE.  It's a paved bike trail which is an ambitious county project.  In places they have built spectacular footbridges over busy highways. 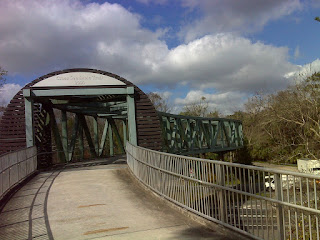 In places it leaves the urban blight and passes into the woods. 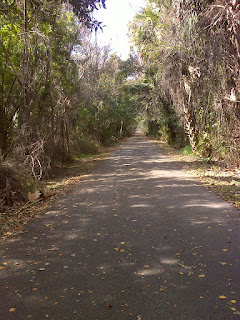 It crosses wetlands on dedicated bridges, some of which are old railroad trestles 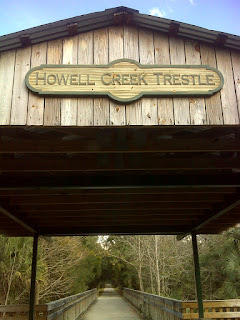 And in yet other places it had created stark beauty from ordinary power line easements. 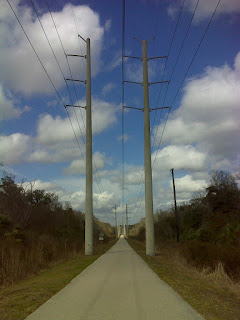 But the trail is not complete.  In other places it's more of a route than a trail.  It uses existing sidewalks and crosses some busy multi-lane roads at traffic lights.  It's a work in progress.

Alongside the trail I finally got the 'proof' that fall comes in spring here in central Florida.  The red maple (acer rubrum) grows as far north as Newfoundland and Manitoba, Canada.  There it produces brilliant displays of fall color as it loses its leaves in September or October.  Then the sap starts running in February and it flowers and produces winged seeds before leafing out in April.  Here in Florida it holds onto those leaves until it blooms.  Here's a close up of a branch in full fall color with blooming flowers at the same time. 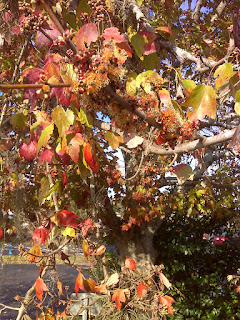 In other news of the plant world, I passed landscaped backyards where what I recognize as house plants and purely tropical vegetation is growing unchecked.  Philodendrons were most common.  Landscapers use cut-leaf tree philodendrons liberally, and the variegated heart-leaf vines were running wild up the trees. 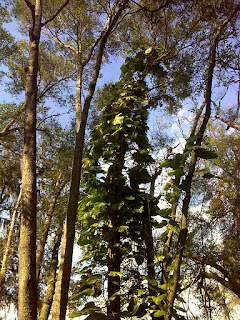 I even saw a banana clump bearing fruit. 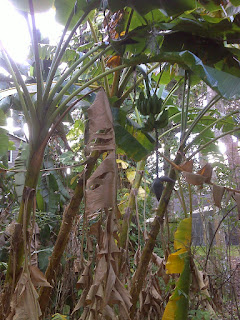 Slightly off the trail I took the time to visit the site of 'The Senator' - the former biggest Bald Cypress, that was burned out by a drug-addict vandal in 2012.  There's still a big tree there in Big Tree Park - it's nearby Lady Liberty with a trunk ten feet across. 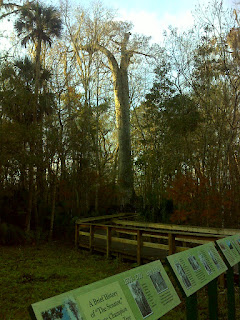 The Senator itself has been cloned and a young offshoot grows in the park playground area. 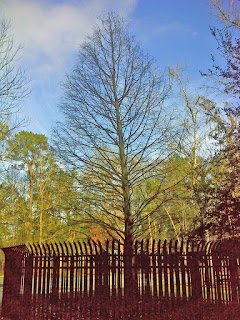 Oviedo is near the southern end of the Cross Seminole Trail.  From there southbound the Florida Trail heads into the whimsically named Little Big Econ State Forest (it's named for the two branches of the Econlockhatchee River, both of which pass through the Forest).  Conditions in Little Big Econ came up in the conversation behind the Town House Restaurant - and the news wasn't good.  More about that in my next report.


Here's the map of today's bike trail walk, with links to more photos.