Did sixteen miles today, and only the first few were in Ocala National Forest, then it was on into Seminole State Forest with a tour of the La-No-Che Boy Scout Camp in the middle and road walks connecting the three venues.  I'll touch briefly on each of the three.

The part of Ocala NF that I passed through was longleaf pine savanna.  It had been burned within the past couple of weeks, even around the enigmatic grave shown above.  The grave site was surrounded by a fire break so was not burned.  A lone gravestone in the woods surely has a fascinating story behind it, and people have done research into available records.  But none of what I read via a Google search provides even a faint hint of a Florida connection.  Everybody in Jeremiah's family lived in Ohio.  The poem at the bottom suggests that one or more of his four surviving brothers placed the stone, yet all four of those men - Joel, Isaiah, Josiah, and William, are buried in Clinton County, Ohio.  A fascinating mystery - makes me want to start making up stories.

There was something else I couldn't explain here.  Since the fire, the burned area had been planted with thousands of young Longleaf Pine seedlings, despite the presence of plenty of mature longleaf pines to provide natural seed.  This is a management strategy that I've not seen anywhere else - can't explain the reasoning. 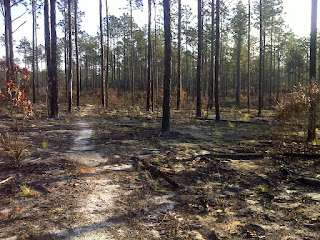 Okay - on to the Scout Camp.  It's a big place. The trail runs through it for a couple miles and goes past a few of their adventure facilities.  Here's what looks like a set of zip lines over a pond.  I caught two cranes in flight banking above the wires. 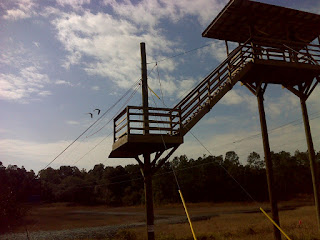 There were freshly fallen wild oranges in a wooded area, so I tried one.  My first impression was that they are wonderfully juicy--very thirst quenching.  Second, they are nearly as tart as limes--edible but not sweet enough to want to go back for more. 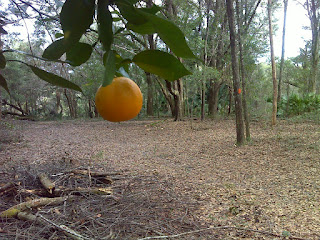 Third, they were just chock-full-o-seeds. 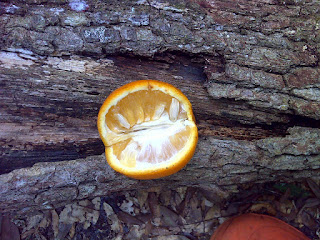 Although this orange variety has widely naturalized in Florida, it is not native.  It was introduced from Spain.  The scout camp provided this and many other varied experiences for the hiker - quiet woods, a pond, a wide open meadow three quarters of a mile long, and even a working spigot providing clear cold water.

Last on today's itinerary was the northern half of Seminole State Forest. It's a fragmented patchwork of public land mixed with private holdings, and I don't have any photos of this section worth sharing.  I got as far as the Cassia Trailhead by the end of the day, and there I got a shot of a pair of Sandhill Cranes that seemed semi-tame and hanging around hoping to be fed. 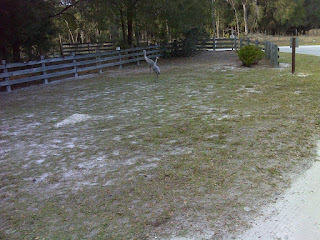 The main body of Seminole State Forest is south of here - a chunk of land that contains a big lazy stream with steep slopes covered with dense growth, scrub forest, and a freshly bulldozed and torched sand pine forest that looks like a nuclear war zone - full report coming soon.


Here's a map of today's hike, with links to more photos: