A bunch of beach 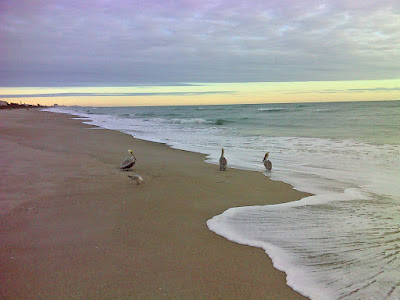 Nineteen miles to be more precise.  After taking a zero day to catch up on logistical things and to catch up on this blog, I hiked from Melbourne Beach to just south of Sebastian Inlet.  Sebastian Inlet is the first interruption of the beach strand since the inlet/canal between Cape Canaveral and Cocoa Beach.  It's a small inlet with jetties securing its banks.  Here's the view from the short bridge (which has no pedestrian accommodation): 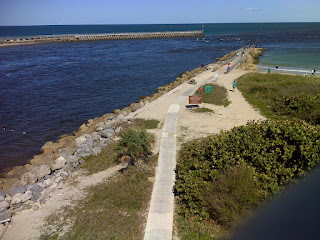 As I approached the bridge I saw the creepiest cactus of all times - literally creepy, in the sense that it looks like a gathering of snakes. 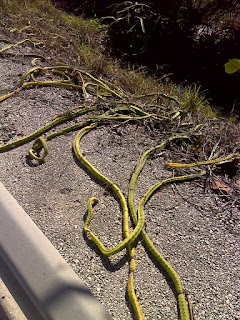 Then as I left the bridge on the other side there was a real snake - in the mouth of a snowy egret. 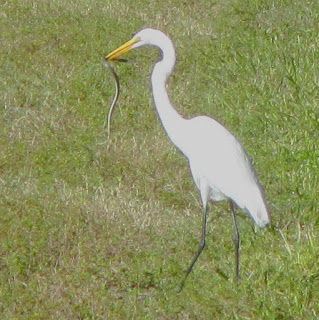 The bird was juggling the snake to try to get its head into its mouth.  I interrupted this effort as I approached.  It flew off to try again in a more secluded setting.

There were birds on the beach, too.  Besides the pelicans shown in the headline photo there were Great Blue Herons, normally a bird that keeps its distance from humans - these had taken to hanging around fishermen hoping for a hand-out. When you're hiking the beach all day a bit of trail through greenery seems special.  I hiked a path behind the dune in Sebastian Inlet State Park for about a mile.  The dune vegetation here is entirely different from what I'm familiar with in the mid-Atlantic. 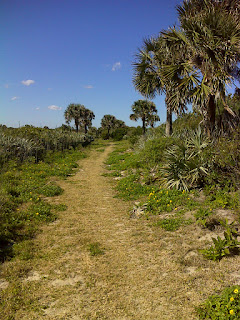 Most of eastern North America is in a cold spell right now, and it has even reached central Florida.  It was a bright but unseasonably cool day and breezy with high temperatures barely reaching the low sixties.  The ocean water temperature in the surf is similar - in the low to mid 60's - so even the snowbirds (the human kind - having migrated from up north) were absent from the beach.  I was glad to have the space, but was hoping for some of the weather they are here for -- average highs are in the low 70's, which means low 80's are as common as the low 60's we're having now.  Maybe before I finish with the beach walk the pendulum will swing, but it seems doubtful.  I'm 'eating' beach so quickly that I'll soon be back inland headed toward Lake Okeechobee.  We'll see.


Here's the map of today's walk, with links to more photos: