Chevy on the Levee - Nine Days across south Florida


This is a long post because it's actually nine short ones.  During the nine days covered I hiked from the St. Lucie Canal east of Lake Okeechobee, around a quarter of the lake on its levees, then I followed canal levees south through sugar cane country, into the Redlands Agricultural district, then through the Everglades to the threshold of the Florida Keys.

I'm back on the Eastern Continental Trail.  With these nine long days under my belt I have 120 more miles to hike - US 1 and the Overseas Heritage Trail across the Florida Keys.

Today I followed FL 76 beside the St. Lucie Canal for seventeen miles. 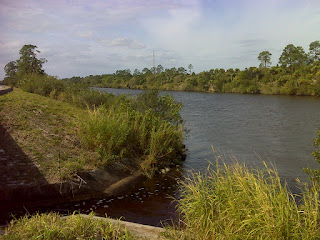 On the other side of the road was dominated by huge tracts of land owned by familiar names like Del Monte and King Ranch. 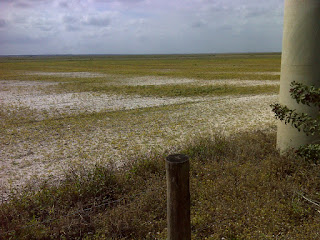 My favorite moment was when I spotted a male African Redheaded Agama - a big non-native, 8 to 10 inches long, introduced into Florida about 1976 by the exotic pet trade. 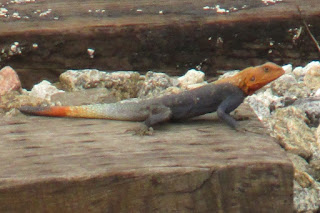 Weather was comfortable, cloudy, in the 60's with some rain.  I managed to duck into my Chevy van in time to avoid the one major downpour.

Here's a map of the day's route, with more photos:

Just eight miles today because I had off-trail business to take care of and got a late start to avoid morning rain.  By the end of the day the weather was beautiful, and I had reached Lake Okeechobee at the town of Port Mayaca. 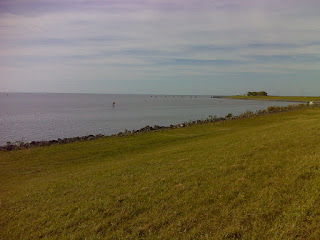 Here's a map of the route:

Starting today I began to really crank out the miles.  I did twenty-one today.  I followed the Florida Trail around the east side of Lake Okeechobee through the towns of Canal Point and Pahokee, then struck out southward to the sugar cane town of Belle Glade.  Half the sugar cane produced in the US is grown in the rich black muck soil here.  It was harvest time and the cane haul trucks were constantly roaring by.  Here's a view of a cane field being burned and harvested: 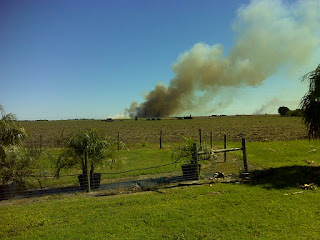 I was surprised to learn that Lake Okeechobee is only 6000 years old - a result of rising sea level after the last ice age. 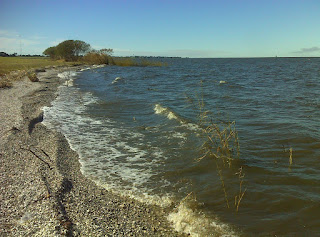 Leaving the lake I walked FL 715 between Pahokee and Belle Glade.  On the south side of Pahokee the highway is lined by these stately old Royal Palms: 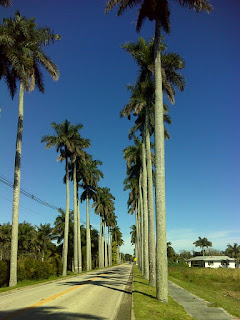 Here's a map of today's hiking route with links to more photos:

This was the first of two days needed to traverse 41 miles along a major canal following US 27. 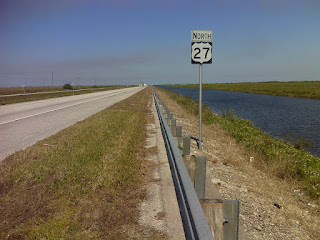 It is a busy four lane divided highway but the guard rail between it and the canal is well away from traffic, set in pavement, and is sprayed with herbicide, making it a ready-made hiker trail.

Yes, the guard rail is virtually continuous for the entire 41 miles from the town of South Bay near Belle Glade down to I-75/Alligator Alley.  Today's twenty-three miles took me out of the sugar cane fields and into the northern Everglades 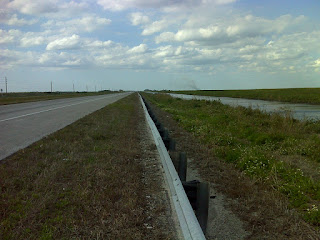 Spotted along the way today was this black racer, so-named because it's a fast mover. 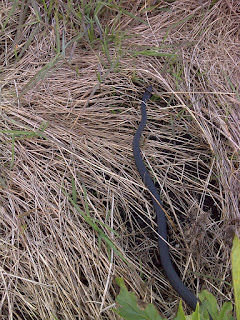 Here's the map of today's route and more photos can be accessed via the red "pins".

More guard-rail trail today - twenty-three miles worth, mostly through Everglades lands, which got me to I-75 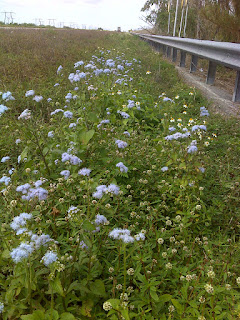 Roadside reptiles were on display again today, both living and not-so-much 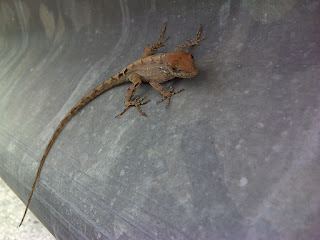 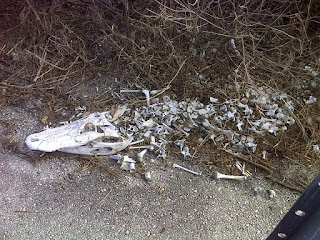 Hiking weather was ideal--low 70's all day with sunny skies and a refreshing breeze.

Here's the map of the route and more photos:

Today I continued road-walking south  I left US 27 and began the hike along Krome Blvd/FL 997.  This highway is being upgraded from two lanes to a four lane divided highway.  The unfinished lanes were great for hiking. 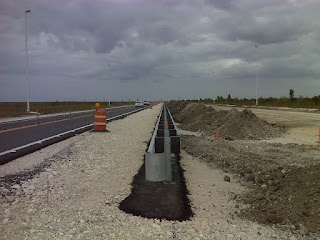 Today's route skirted the boundary between developed areas east of the highway and Everglades wetland to the west, much of which was clogged with the badly invasive Melaleuca quinquenervia - the Australian paperbark tea-tree. 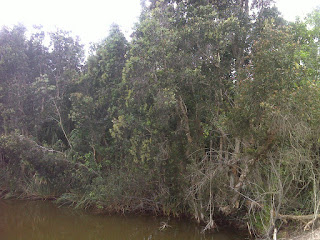 Weather continued to be ideal, so I accomplished twenty-two miles with ease.


Here's the map of the route, with links to more photos:

Today I got back on the route of the Eastern Continental Trail, joining it where it comes east along the Tamiami trail and turns south on 997, which I had been hiking since yesterday.  The junction is the site of the big Miccosukee casino and resort hotel. 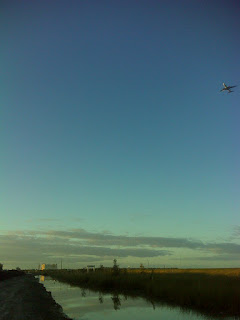 I continued through the sixteen mile construction zone on 997 and ended the day in the heart of the Redlands Agricultural district where the land is a patchwork of large-scale nurseries and agricultural fields. 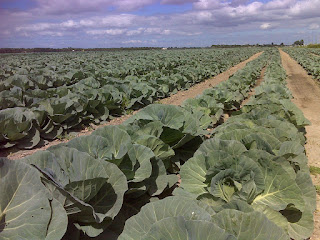 There were more wetlands infested with Melaleuca - here's a good look at its bottle-brush flowers, five-veined leaves, and peeling paper bark: 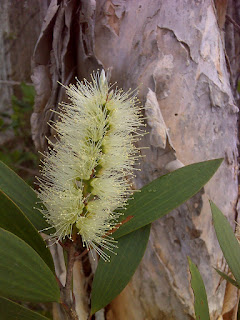 Also spotted today, and new to me, was the yellow Mexican Poppy: 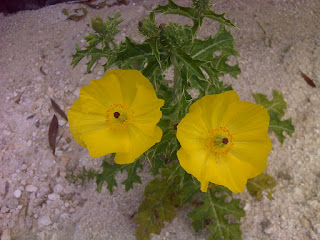 Here's the map of today's trek, with links to more photos:

This was the first of two days hiking the levees of the C-111 canal on the South Dade Greenway trail system. 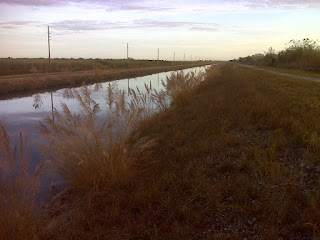 To the west were the Everglades ... 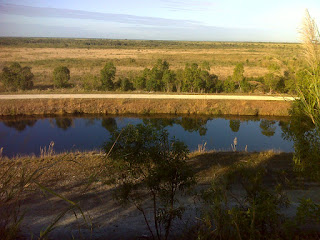 ... and to the east, today, the Redland agricultural district continued.  Set within that is the busy Homestead General Aviation airport. 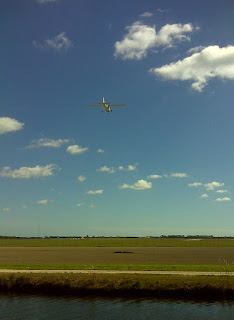 The trail here has mile markers, though the locals think of them more as targets of opportunity: 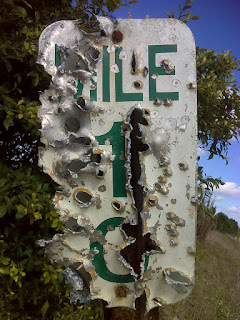 Where the trail is on the west side of the canal, it feels remote even though the sounds and sights of civilization are abundant just across the water.


Here's a map of the route hiked today, with links to more photos.

Today's hiking brought me into the low flat, relatively unspoiled wetlands of the southern Everglades. 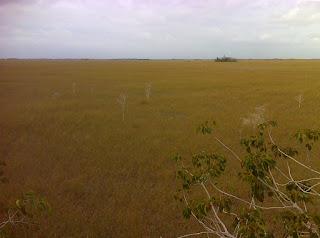 The wetlands were particularly wet this winter, and another heavy downpour flooded the land some more today and thoroughly soaked me.  Before the rain I encountered this South Florida Water Management District helicopter, hired to carry equipment and water samples into and out of remote sites in the Southern Glades Wildlife and Environmental Area. 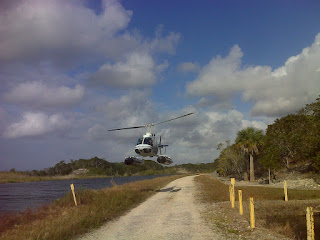 Also before the rain, I had a close encounter with a big fat water moccasin. 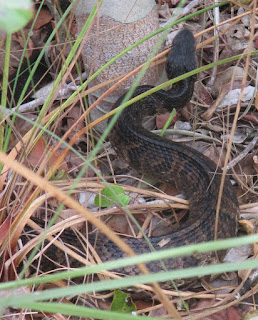 When threatened, they show you their cottonmouth. 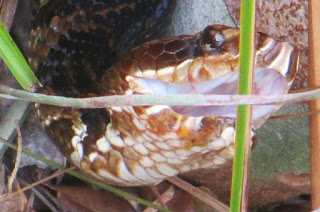 I wasn't really that close--the photo was taken with a zoom lens.  At the end of the day I was within ten miles of the Florida Keys.  I could smell the ocean on the south wind.  Tomorrow I'll be on the Overseas Heritage Trail.  120 miles to go.  It's beginning to feel like the goal is in sight.


Here's the map of today's hike, with links to more photos: