This is part 11 of a 31-part posting of my journal entries and photos from one of the greatest experiences of my life so far--a month-long mountain climbing trip to the Atacama Desert area of northern Chile and Argentina, which included summiting three 6000 meter peaks (~20,000 feet).  To view all the entries in this series, check the posts labeled South America.

I did fall asleep for a few minutes, then I had the brilliant idea to line up four of the nicely padded chairs that happened to be the chosen furniture here--not contoured but flat, not plastic but wooden with vinyl covered foam rubber padding. So I slept on those for an hour or more, though I didn’t seem to get any more sleep.

Nobody bothered me. In fact a security officer was constantly pacing back and forth right past me and the workers at the restaurant whose chairs and tables these belong to were going about their business behind their counter right across from me in plain view.

I sat up again at 2AM, feeling somewhat refreshed and even energized. I tried getting on the internet again using the same key and password, just to see how it would respond (I expected to be directed to buy more time). But instead it let me in and let me browse for essentially two more hours. It returned me to the ‘password or pay’ page at 3:55AM after I had already browsed just about everything I wanted to. One of the first things I did was research vicuñas and guanacos and found out definitively that the animals I saw grazing at Rio Lama are guanacos. 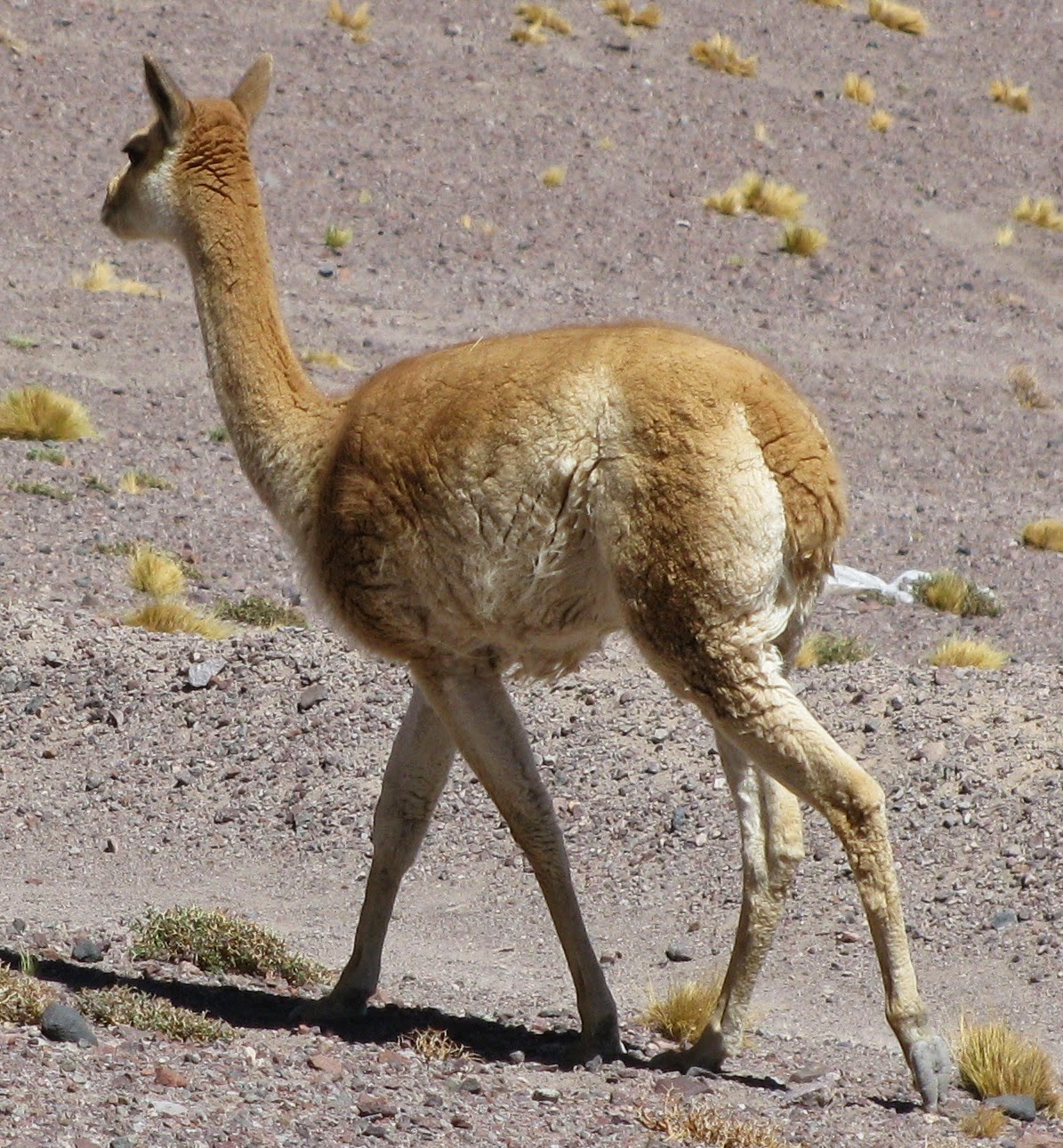 At 4AM I just closed my eyes and got a few power winks that seemed to help. The airport was getting quite busy by the time I stirred again at 4:45. People were even beginning to sit in the area around me, and most of the seats in the area around the restaurant (serving pastries and the like) were already filled. I semi-dozed some more until 5:15 when I was surprised to hear the first sound of an airplane taking off since I had sat down here late last night.

I didn’t have any compelling reason to be on the internet any more so at 5:20 I shut down the laptop and headed for new venues. I ended up sitting at a nice spot with a view of the ocean on the second floor of the airport terminal. I sat there until around 7:30 when the sun came above the trees and started hitting me. Then I checked my bags for the coming flight and wandered around. I went outside and across the street to the oceanfront walk way: 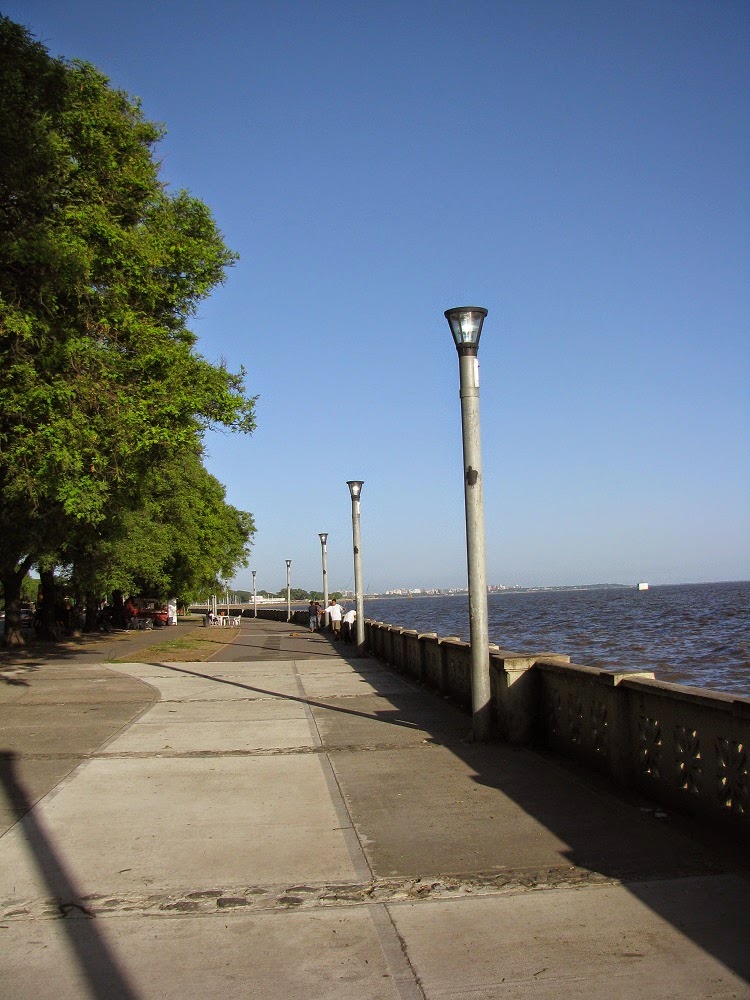 The ocean was very muddy due to lots of rain bringing silt down the big river that empties into the sea just to the north of the city.

Back inside I went through security and found several more shops to visit and check out. Finding nothing of interest I lay down on some out-of-the-way seats and rested and got a little sleep. It became a tedious wait, though, because the terminal was over air-conditioned and I was getting cold. To me it’s just such a shame to waste my time in beautiful summertime conditions shivering in air conditioning. I’ve railed about this before and probably always will.

Finally we boarded and I found I had an exit seat and that the airplane was barely half full.  Had another nice view of sprawling downtown Buenos Aires as we ascended: 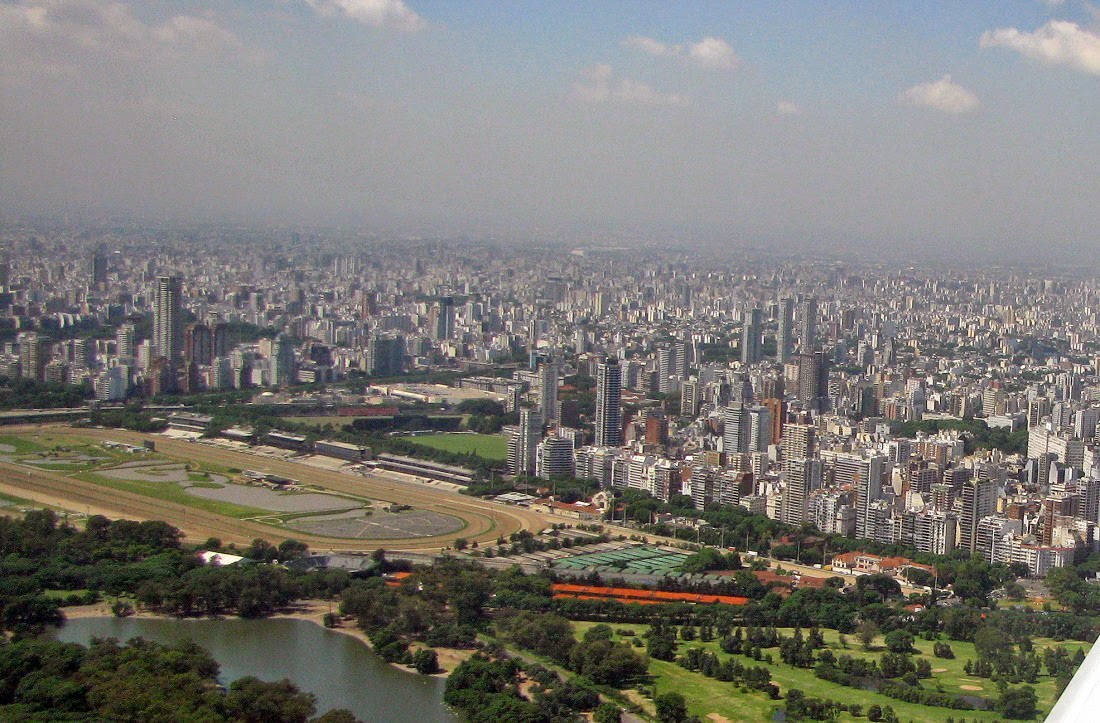 After getting up higher there were clouds along the flight path, so I actually got quite a bit of sleep on the flight. When we got to the tiny Catamarca airport, I met Brian Jones, oil industry worker from Scotland who had been working in Angola. He had been on the plane with me. We were met by the expedition leader John Biggar, who was bigger than I thought (based in an internet picture).

We took the 20 minute taxi ride to the hotel in the downtown of this provincial capital of the poorest province in the country—still considerably more affluent than most of Bolivia. We moved our bags into the room that Brian and I will share tonight, and then went out to a café on the town square for a beer and a light lunch. We got to know each other a bit, and I had a nice ham and cheese sandwich. Then we returned to the hotel and John had to go off on a long taxi ride to pick up the other members of the expedition at a further away airport (Tucuman). Brian and I napped then went out about 5:30 and walked the square where there was a stature of South American liberator Jose de San Martin …


… and then we walked the long pedestrian-only street that extends from there for about 10 blocks south. It was unusual to me that there were no street vendors. In Bolivia every spare inch of sidewalk on downtown streets is occupied by vendors. On the way back Brian and I split up and I went into a Pharmacy and, with help, found bandaids--they kept them in a drawer behind the counter. I then wandered back toward the hotel while Brian went grocery shopping for juice (he doesn’t like to drink just water). 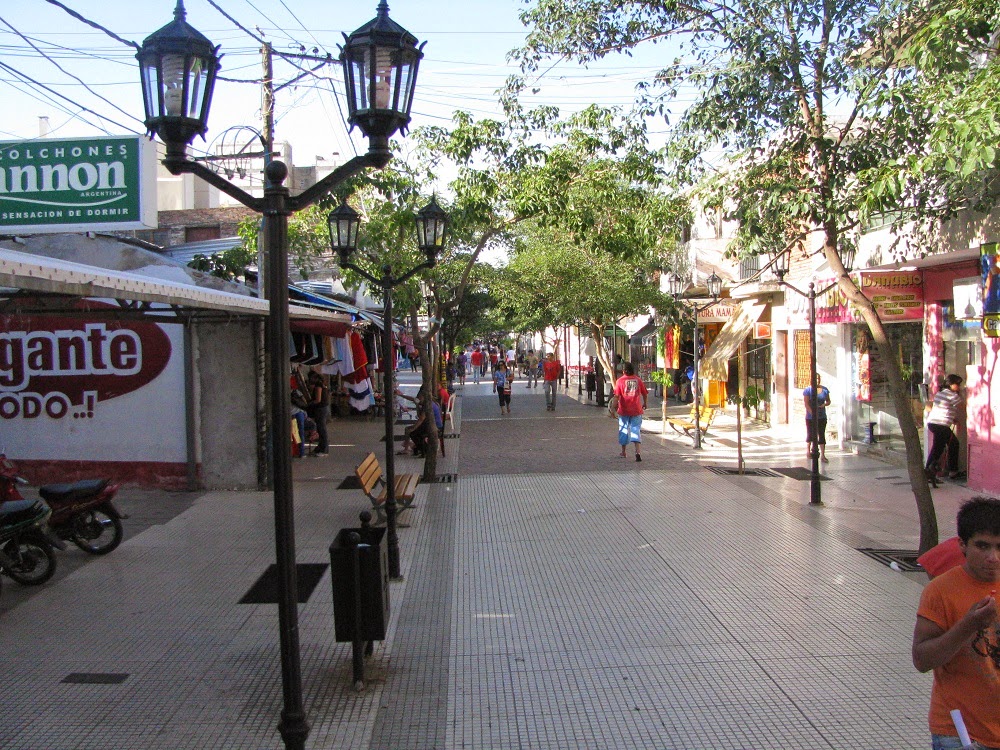 I toured the square area some more and visited the huge, always-open cathedral on the town square. It’s just such an impressive different scene from street life--clearly a really important part of virtually everyone’s reality here. The place is gigantic, really ornate, well cared for and loved, and much used. There were a dozen or more people in pews kneeling and praying. It was dim in there and I felt too intimidated to take any pictures of all the beautiful icons and stained glass windows. It somehow felt as if I would be defiling the place and disrespecting the people there praying earnestly.

I got back to the room about ten minutes before Brian did. I ate the last of my Oreos and got on the internet and hit usual sites then uploaded and captioned photos. Finally I caught up on my journal, then at 8:15 I got off the laptop and lay down and rested for a bit. The rest of the gang was supposed to arrive from the airport around 9PM. I fell asleep and got a good nap until someone knocked on a neighboring door at 10:10 and Brian thought it might be our guys. It wasn’t. With no sign of them I decided to eat in the room and made some Ovaltine and got back on the laptop at 10:30 and caught up on record keeping while consuming the jug of Ovaltine (that used all the rest of my water). I surfed the web, hitting all the sites of even remote interest, sort of killing time. At Brian’s suggestion I also looked up all today’s flights from Buenos Aires to Tucuman (where John was going to pick them up). They all seem to have arrived in good shape and more or less on time. Yet as of midnight tonight they have not arrived here at the hotel. Soon after midnight we turned off the lights and went to bed.