Chile: Driving from the Pacific coast to 14,000 Feet

Note:  This is the fourth in a 31-part posting of my journal entries and photos from one of the greatest experiences of my life so far--a month-long mountain climbing trip to the Atacama Desert area of northern Chile and Argentina, which included summiting three 6000 meter mountains (20,000 feet).  To view all the entries in this series, check the posts labeled South America.

Though I went to bed late - 2:30AM, I fell asleep quickly and easily and got all the sleep I needed. I didn’t wake up until it was daylight, at 7:15, and only then because an alarm clock in the next room went off. I did my journaling on the laptop then packed some stuff and took it to the car. I was surprised to find that it was drizzling enough to accumulate a mist on the car--eventually enough to run off. For the driest desert in the world that seemed pretty significant.

I headed up to the hotel's free breakfast buffet. It was fairly sparse--plenty of breads and the like, but no eggs or warm meats, so I filled up on cold lunch meats, fruit cocktail, fruit juice and whole milk. Everything was good, but with nothing cooked, the hotel is getting off pretty easy for the high price they charge for rooms. I guess you're paying for the oceanfront location.

Back in my room I caught up on record keeping and finished packing. Before checking out I got on the internet in the lobby and posted a quick entry on Facebook. I was on the road at 9:30, passing the airport fifteen minutes later, and driving on to Copiapó. My first stop was supposed to be the only stop - the gas station on the way out the other side of town. But they started pumping gas before I thought to ask if they took credit or US dollars--they didn’t take either!

The very nice middle aged man who had pumped the gas said he would hold my US dollars while I went back into town to change some money. He recommended a huge modern supermarket called Jumbo that I had noticed on the south side of town on the way through--the place I should have found yesterday when I did all my grocery shopping! He seemed to think they would change money for me. After negotiating the usual one way streets and no left/right turn intersections through town, I finally got to the Jumbo store and parked in the US style lot--even better because all the closest in parking spaces have roofs over them.

The store is modern and absolutely huge--I’ve never seen one so big and well stocked and well lit in the USA!!! But they did not change money, so I had to head on to downtown, dreading the prospect of finding parking. I had noticed an underground parking sign at the big mall right at the town center area, but I chose not to try to park there. Luck was with me, though.  I found a parking space within a block of the central square.


It was the only empty space I saw, and it was only half a block away from a big Banco de Chile building. As soon as I walked in the door someone directed me to the right person. But I had to take a number--20--and they were serving number 10. I took the time to look at the busy town square and take a picture.

Then I sat around in the nice cool shade of the bank lobby, eventually got my cash changed, and headed back to the gas station. The attendant looked like he was surprised to see me.  Obviously he hadn't expected me to ever return. I had him top me off with more gas and then I was finally on the road to the mountains at 12:25PM. 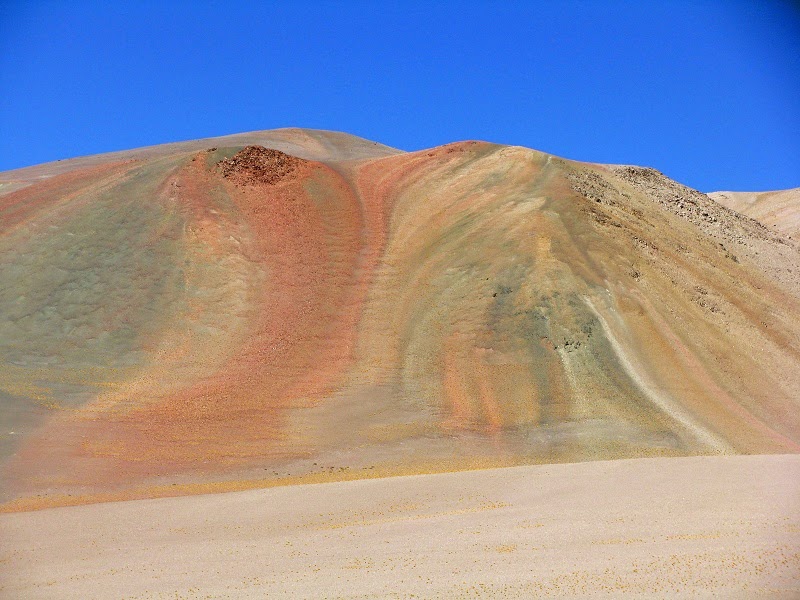 I took my time driving up, stopping to take pictures along the way, including stopping at some remarkable 'painted hillsides' with multicolored naturally flowing (gravity driven) color streaks--untouched by any human or animal tracks--the place is so remote and so dry that few wild animals roam it and no humans have desecrated that delicate beauty. The glacier like flow of the soil is obvious. It probably takes thousands of years for a rock to flow from where it breaks loose from its source until it reaches the base of the hill.

I drove over the first pass, called Cuesta Codoceo, that Google maps says is just over 14,000 feet and my watch altimeter said 13,500 feet. I stopped there to take pictures of the unique prickly tundra plants, and noticed that the altitude was affecting me.  I was significantly dizzy and disoriented--sort of impaired as if slightly drunk. Based on that I decided not to go all the way to 15,000 foot Laguna Verde tonight, but to stop at a lower elevation.

At the Salar de Maricunga border check station (which is more than 20 miles from the actual border  because of the border's remoteness and extreme elevation) I had expected lots of bureaucratic paperwork and questions, so I was shocked to find that the attendant told me I didn’t even have to stop if I wasn’t going to cross into Argentina. I drove on from there and started up the smaller pass or summit called Cuesta de Rio Lama. On the way up that I noticed some Guanacos and was lucky enough to take a couple close-up pics:


They were there because down below them was a strip of really lush grass and flowing water in the Rio Lama valley. That place really looked inviting, so finally I stopped at a curve around a gentle wash that led down to the stream. The spot was sheltered from the steady winds too. I had already reached the same altitude as the top of Cuesta Codoceo, though I was now already better acclimatized and felt pretty good. I put on sun screen and hiked down 500 feet of elevation to the river where I saw 8 more Guanacos grazing:

They saw me also, and though I wasn’t close at all, they abandoned the grass and headed up the hillside. I walked around a little and took a bunch of pictures and then headed back to the car. From atop the 100 foot cliff I took a vertical ‘panorama’ of the stream as it tumbled down amid the lush green grass it supports in this otherwise utterly barren desert.


The walk took about an hour. I was back at 5:30. I unpacked a few things in anticipation of the cold night, though with the sun still shining on the car it was too hot. I got out my thermometer among other things and found that the air temperature in the shade was above 60 degrees even here at 14,000 feet, and even as it got dark it was still lingering in the upper 40’s. I ate some supper of Chilean crackers and American Skittles.

Traffic was very sparse and got to be much less as evening progressed. I learned later that that was because the Argentine border post closes before dark and allows no traffic through. A car came by around 7 and the next one at 8PM. I had been napping or resting as the sun went down behind the adjacent mountain around 7:30. I got up and got on the laptop about 8:10 and downloaded and processed all the new photos then caught up on my journal. By then it was almost completely dark. Another car came by just as I was finishing, at 9:10PM. I put away the laptop and settled in for a long night that I expected to be uncomfortable just because of the position of sleeping on a reclined car seat.

(Another note:  For this portion of my adventure I was alone and did not have a tent.  I was later to join an expedition on the Argentina side, but had come to Chile early in order to get more time acclimatizing myself to high altitude and doing some extra hiking in those extreme elevations.)