Marching to Rasguido - the Lunar Landscape

This is part 17 of a 31-part posting of my journal entries and photos from one of the greatest experiences of my life so far--a month-long mountain climbing trip to the Atacama Desert area of northern Chile and Argentina, which included summiting three 6000 meter peaks (~20,000 feet).  To view all the entries in this series, check the posts labeled South America. 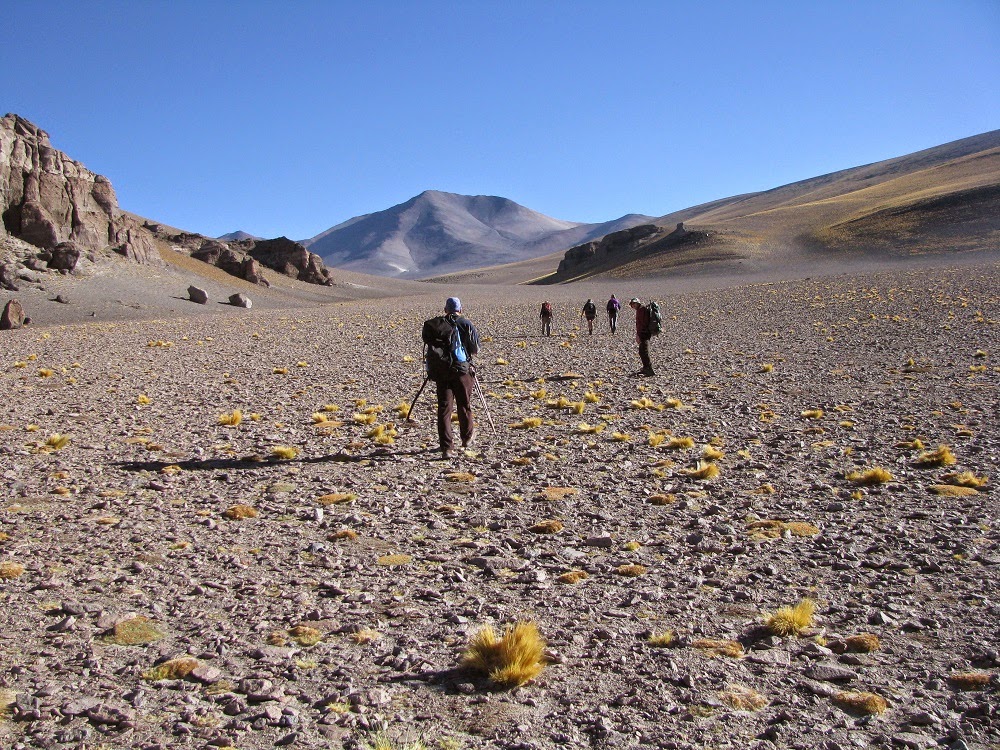 I slept OK though it seemed like I was awake a lot. People started stirring at 7:20. I got up and took a walk down to where the canyon narrows and the stream goes from a lazy wide meandering flow to a cascade. I was looking for places to cross the stream without wading, and I found one (for future reference on the way back out). Back at camp at 8AM I got a quick bowl of oatmeal and then packed and got ready for the day’s hike.

We left at 8:30, first wading the stream, then hiked about 8km cross barren desolate country (see photo up top) that evoked the surface of the moon or mars.  We were headed toward the NE to a subsidiary peak or spur of “Morro Rasguido”, a funny name that translates as ‘scratching’. The peak is over 5500 meters high, the spur was 5120m, or by my altimeter about 16,500 feet -- a 3000 foot climb from base camp. In the photo above, our destination spur to its right, just above the trekkers and the shadows of the rock formation:

We got there about 1PM, 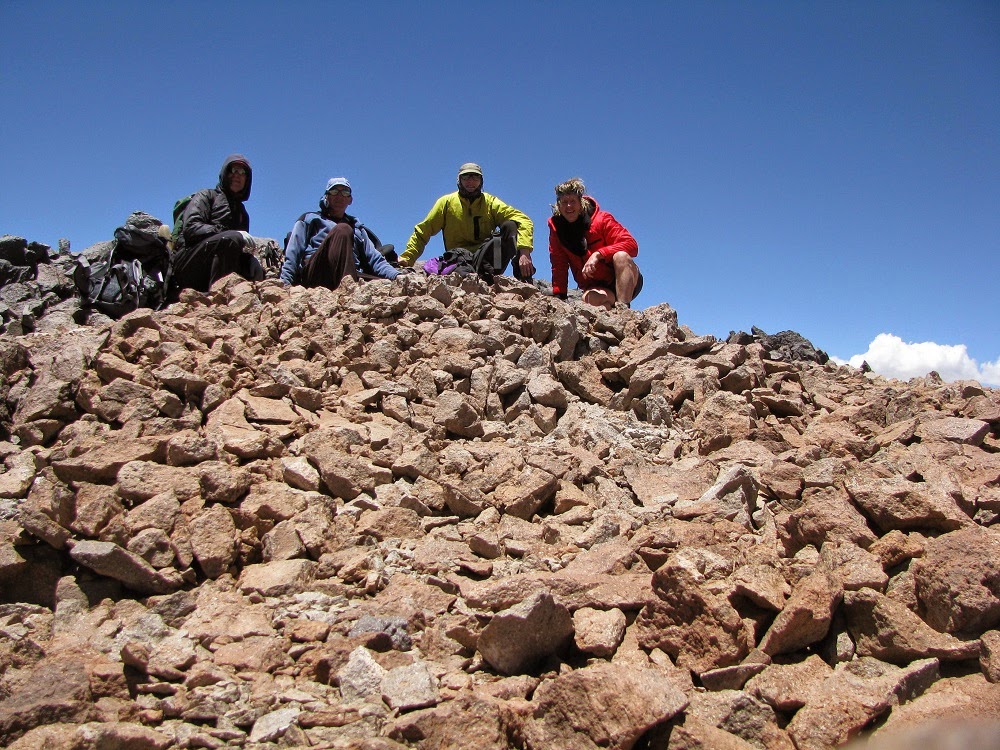 had lunch on the way down, where we had a nice view of our ultimate destination: Ojos del Salado.  Here I've got everybody pointing to it. 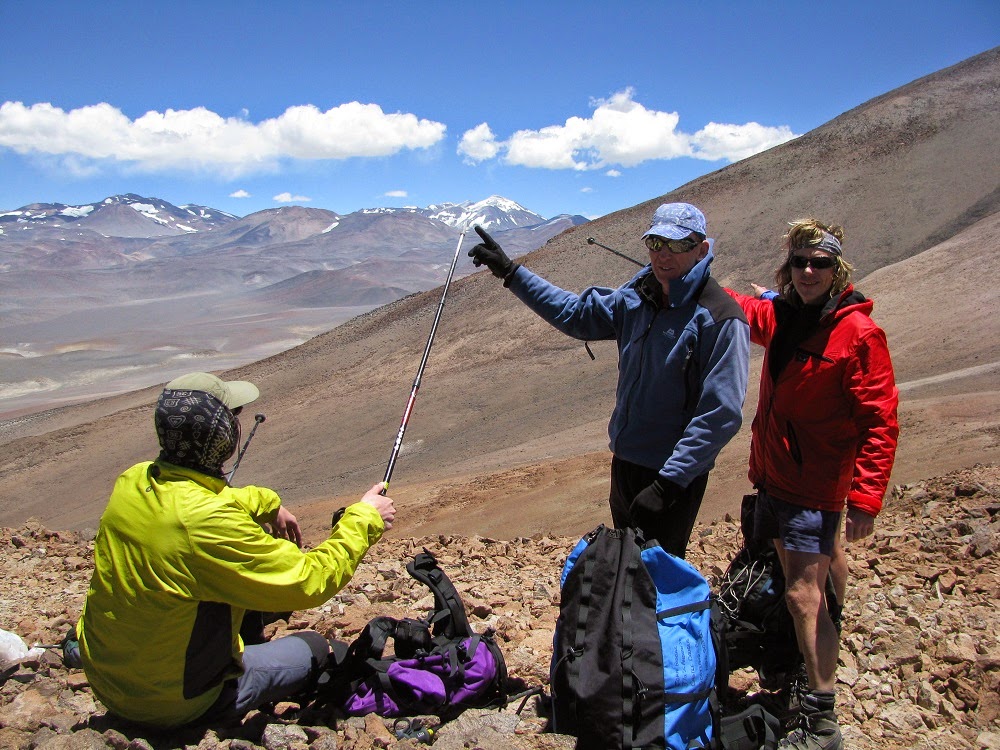 Then it was time for the grueling trek back. Here’s the valley that we are calling home for another night, and Thom wading the soothingly mild waters of the stream. 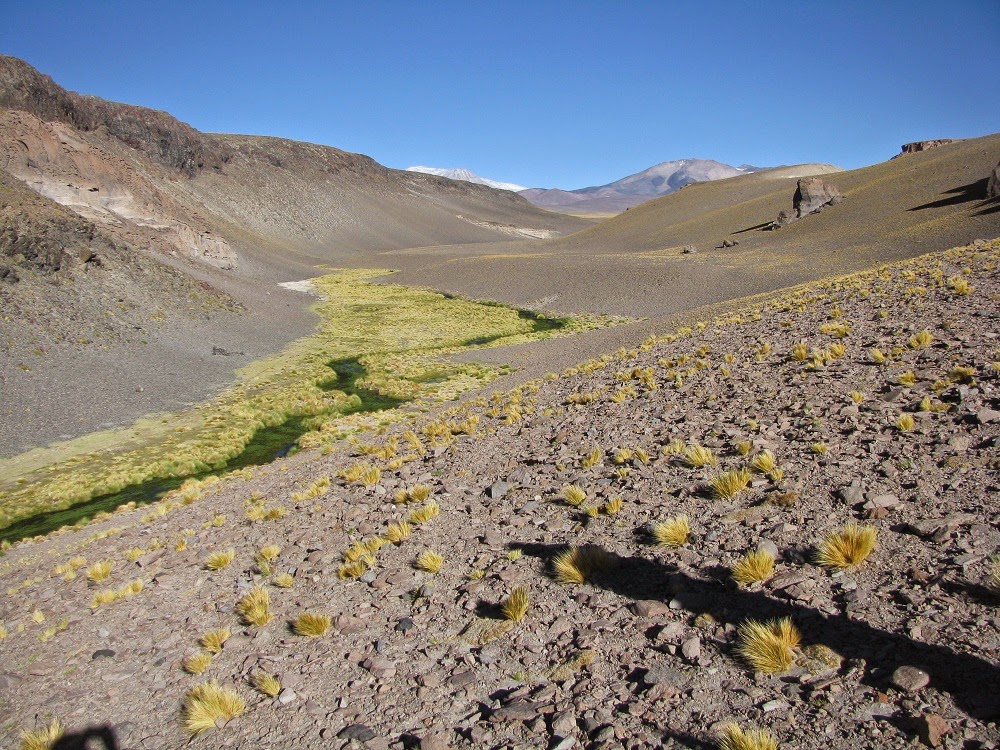 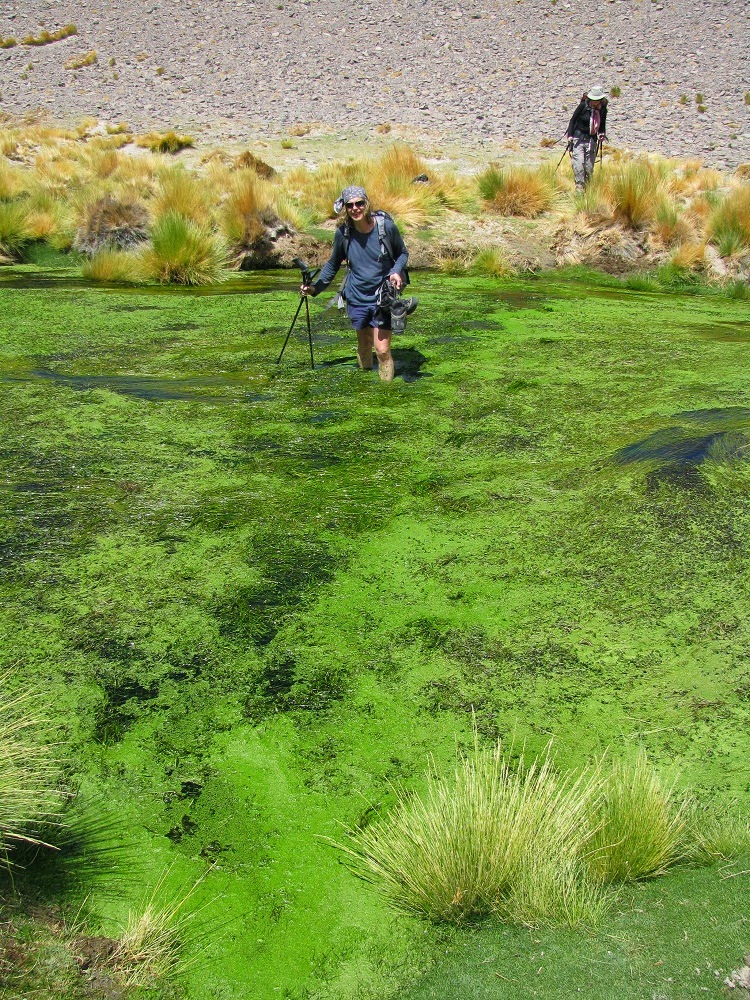 I got back to camp at 3:30, spent some extra time wading around in the stream because it felt so soothing on my feet and legs, then joined the gang for tea and popcorn. Then I washed some socks and a pair of underwear, using my day pack for a wash basin--it was water tight enough to work really well. Finally at 4:35 I retired to my tent and caught up on my journal and just rested for a bit.

As dinner time approached, around 6PM, the weather was turning unusually stormy. Yesterday we had late afternoon storms in the high peaks after east winds all day. I thought that was the culmination of an unusually stormy frontal passage. But today we had thunder and lightning (a lot!) and rain fell at our 13,500 foot camp, enough to wet the ground and chase everybody into their tents. It rained lightly for two hours.

Dinner was a disaster for me anyway because they served a cut of beef that wasn’t that tender, fried on the cook stove and not at all cooked on the inside. I ate none. But I had some ham and cheese instead plus Ovaltine and milk. When the clouds began to clear at sunset we could see that the peak we had climbed has snow on it. And Ojos, which had snow yesterday, probably got a lot more. Bad luck.

I was chilled to the bone for some reason, probably mainly because I had a calorie deficit after the long hike. I spent stretches of time in my sleeping bag through the evening and then basically stayed there after about 8PM. I was finally thoroughly warm by 8:30 and shed extra layers and caught up on my journal and then returned to bed at 8:45PM.