This is part 18 of a 31-part posting of my journal entries and photos from one of the greatest experiences of my life so far--a month-long mountain climbing trip to the Atacama Desert area of northern Chile and Argentina, which included summiting three 6000 meter peaks (~20,000 feet).  To view all the entries in this series, check the posts labeled South America.

It was frosty several hours before dawn when I went out to go to the bathroom, but by dawn there were some clouds and a little breeze that had warmed it up. I slept very well in increments of 2 or 3 hours, overall a good night of sleep. People began to stir late--about 7:45. We had breakfast of oatmeal, and I had a big second bowl of whole bran cereal. Then, on this rest day, people did laundry and washed up. I had washed stuff yesterday, and I wanted to take advantage of the best part of the day. The clouds had burned away and it was calm. I wanted to take a hike up to the top of the condor-roost bluffs overlooking our camp site. 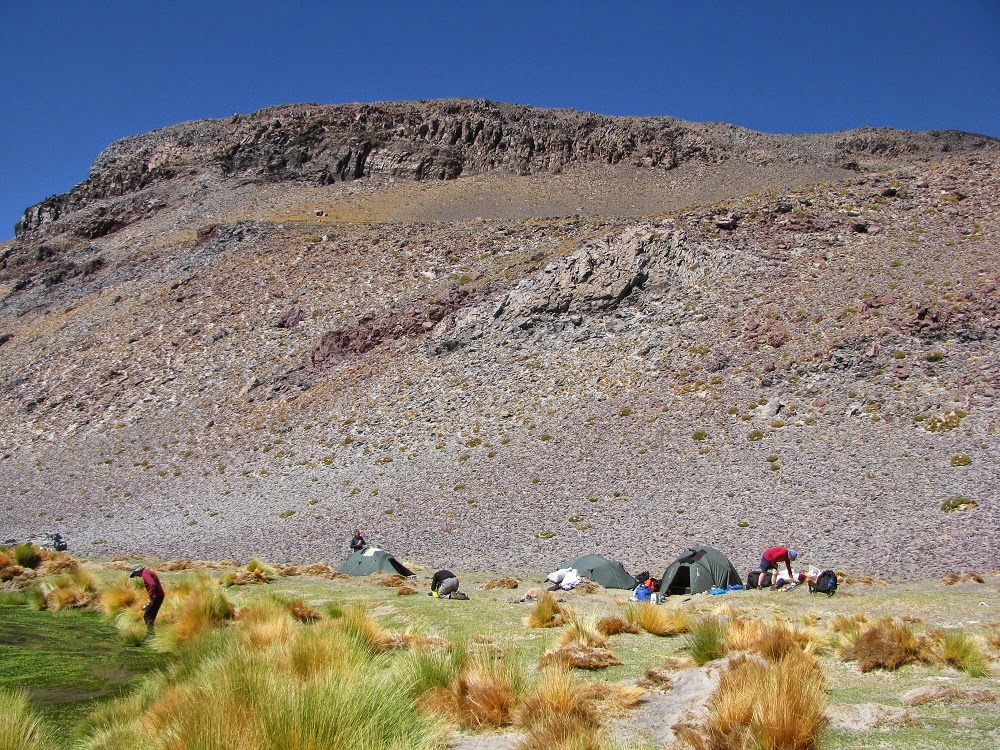 It took two relaxed hours, 9 to 11AM going slowly to get up there via a gap in the cliffs off to the west of the objective. The view from the top was panoramic and great--new snow was on all the peaks above 5300 meters or so:

Below are a couple of close ups--looking at the stark rock formation that also overlooks our camp, with Rosguido in the background, and a zoom shot of the guys doing their 'rest day' thing. 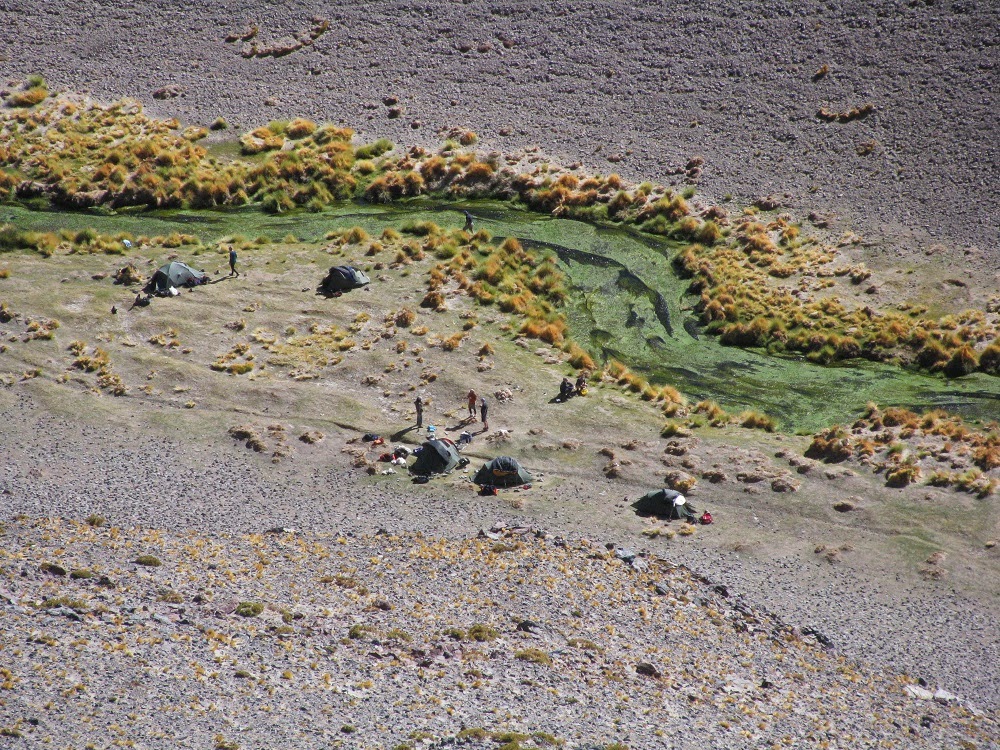 Back at camp I had some snacks with everybody. Then while Barry read in the tent, I relaxed outside, chatted some, and washed my cotton sweatshirt, worn every day since leaving home and pretty stale smelling, though not too bad to me.

We had lunch about 12:30 or 1PM and I tried to eat a lot to keep my energy supplies up (felt like I ran out of energy yesterday evening). After a slow lingering lunch, people went different ways and I went into the tent and caught up on journaling, then at 2:15 I looked at the photos on the camera.

We had some tea and snacks at about 3:30 or 4PM but otherwise I spent the afternoon in the tent reading Silmarillion and just resting and doing some thinking about how and what to pack for the big trek tomorrow and for the eventual move to high camp without support from mules.

We had supper from 6:30 to 7:30 -- definitely not enough food. Then despite a chilly, breezy evening, people stood around talking, apparently not uncomfortable. I was getting gradually colder so I had to retire to the tent and into my sleeping bag. From about 3PM the weather was mostly cloudy with showers around, some sprinkles at our camp. During supper a thunderstorm off to the south dropped some rain and a few flakes of wet snow here at our 13,500 foot camp. But overall the evening weather was much more benign tonight, so maybe the trend toward better weather is beginning. Everybody went to bed early--about 8:30, but a shower came through at 9PM that was strong enough that it had me scramble outside to put all my luggage, etc., under the fly of the tent. Then I went back to bed for good.