This is part 19 of a 31-part posting of my journal entries and photos from one of the greatest experiences of my life so far--a month-long mountain climbing trip to the Atacama Desert area of northern Chile and Argentina, which included summiting three 6000 meter peaks (~20,000 feet).  To view all the entries in this series, check the posts labeled South America.

I fell asleep gradually, as usual, and got a good amount of intermittent sleep--at least sufficient not to notice feeling sleepy during the day. It calmed down and got clear and frosty by sunrise, down to 24 degrees. I got up early, at 6:55 and went out to go to the bathroom, but most people got up then also and started eating breakfast and packing up to be ready for the mules by 9AM.

I had oatmeal and bran cereal for as much carbs and fiber as I could get. We were all packed and ready right on schedule at 9AM but then waited around for 45 minutes in the nice calm sunshine until the mules arrived. So we set off on our long trek of the day about 9:50.

We headed up a series of valleys, some very broad, often very rocky and stark, as the weather became a repeat of yesterday--an early isolated storm over the Rasguido mountain dropped some snow grains on us soon after we passed the source of the Agua Calientes stream--the whole huge stream emerges from the sand in a relatively small area at the outlet of a huge flat barren valley. 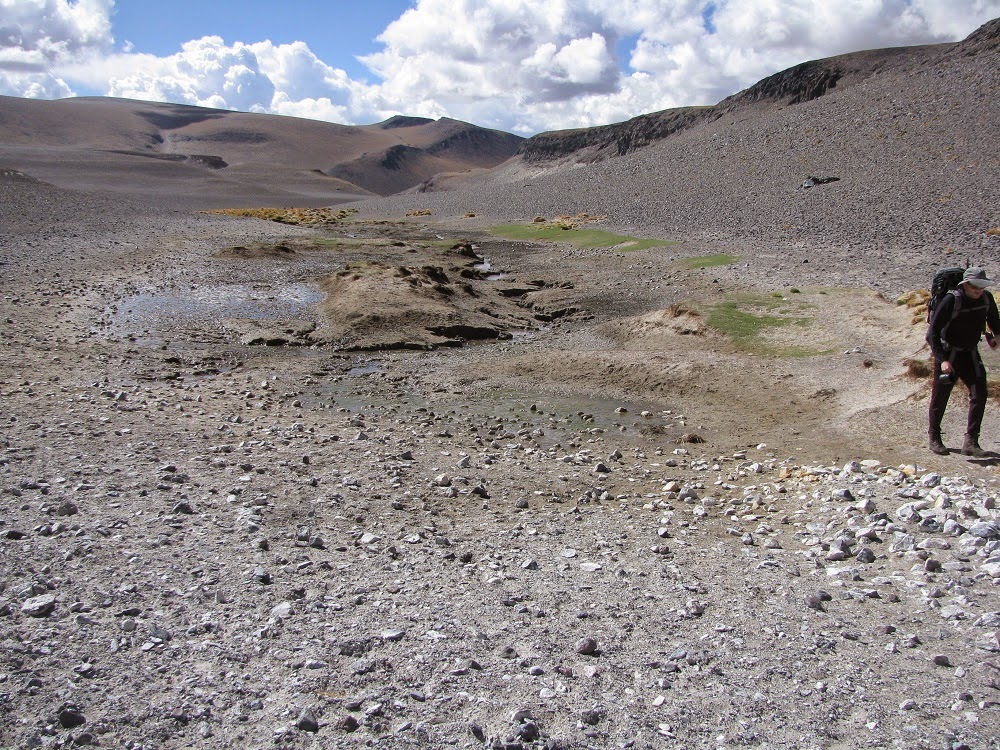 We climbed from 13,500 feet up to 16,100 feet and covered about sixteen km (rough guess).  Here's an example of the scale of this land--huge broad expanses of rock and sparse ground-hugging vegetation. 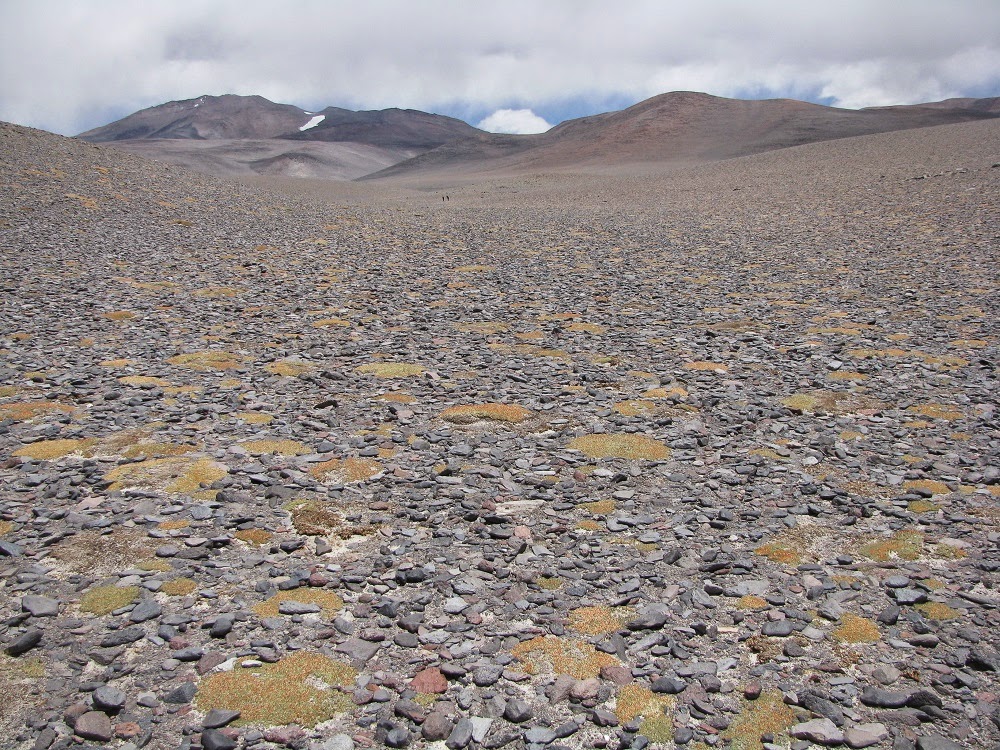 The mules caught up with us during a break.  Here's Barry posing with one: 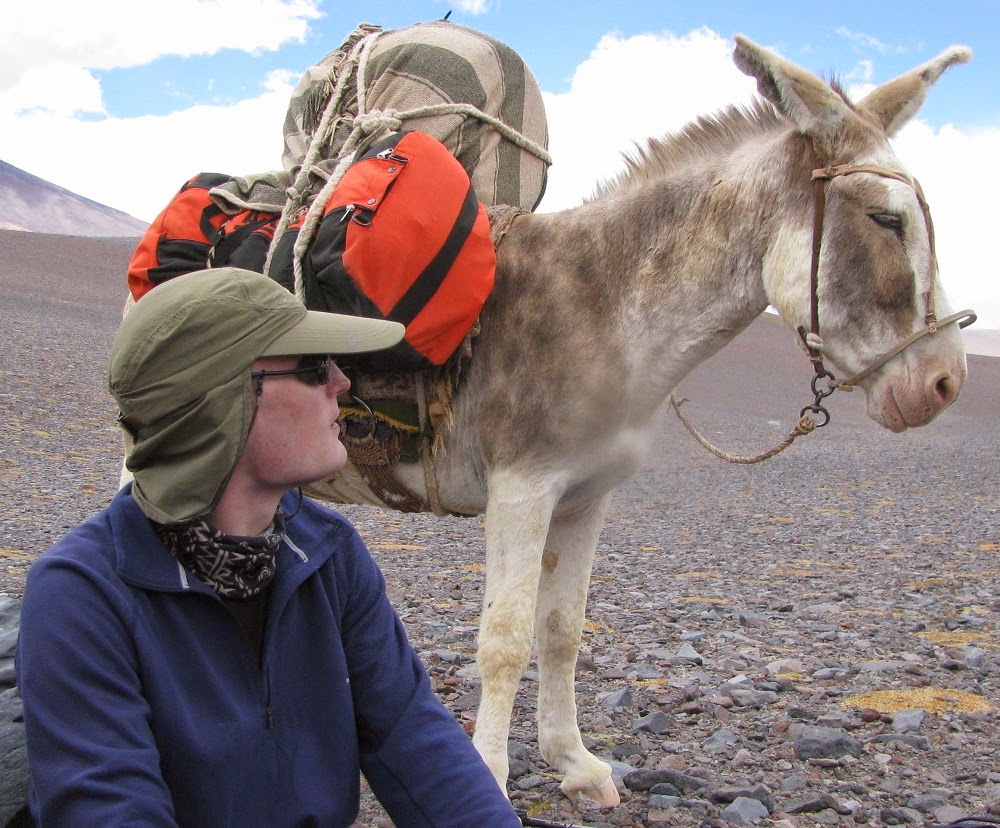 Our way-stop for tonight was the dry Aguas Vicuñas camp site by a big rock at the fork in the valleys.

People trickled in over half an hour or so. Today I deliberately carried a lot of weight in my big backpack (whereas on the previous leg I had let the mules carry my big backpack). It actually felt good to be back at serious altitude; and I felt well acclimatized, able to help set up tents with vigor.

But soon after we set up everything, about 4:30, a storm rolled in with a few claps of thunder to start but then just steady wind and snow grains with temperature in the upper 30’s (so that it was melting rather than accumulating). 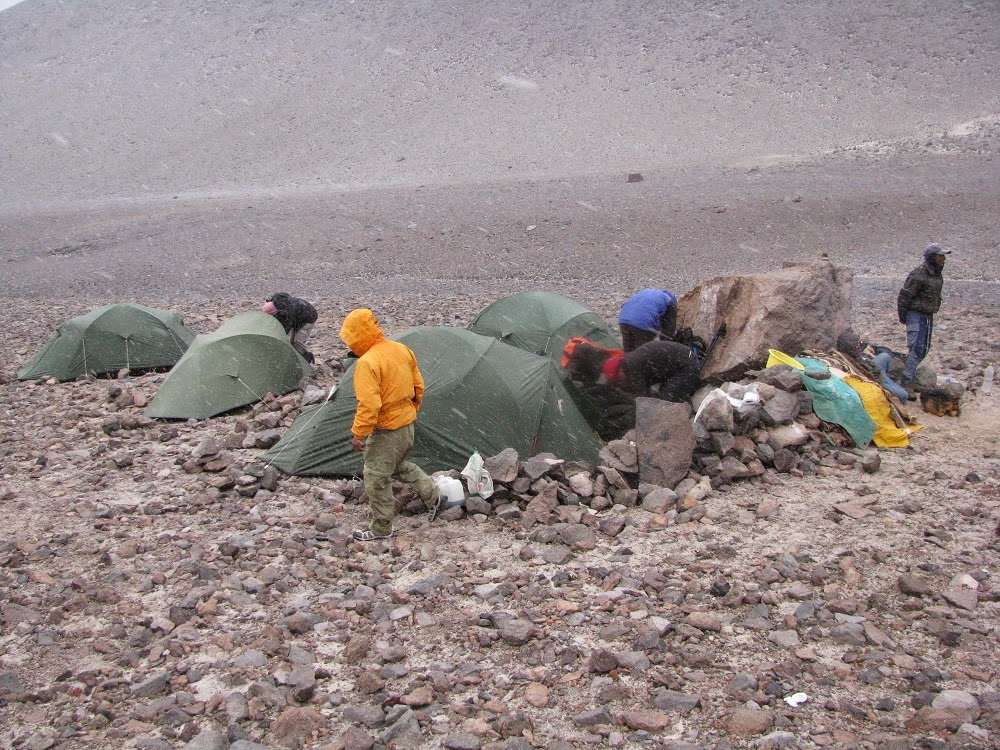 The leaders made some tea and soup but after bundling up and taking a few photos I retreated to my tent to stay dry. Tonight is my turn to have a tent to myself--kind of a fun time to have that privilege, since it was definitely a good time to be in one’s tent. I caught up on my journal to 5PM then did some arranging and planning to carry a lot less weight tomorrow. (Again this was possible to do easily inside my 2 man tent.)

I was finished a very thorough and satisfactory rearranging about 5:30 then just rested and warmed my hands. By then the snow grains had turned to snow. We had a few more claps of thunder as well, and it had begun to accumulate by 5:30. At 6PM I got up and looked outside. The wind was not strong but very steady and consistent and we had at least an inch of accumulation, probably closer to two. By the time the snow ended we had half a foot. 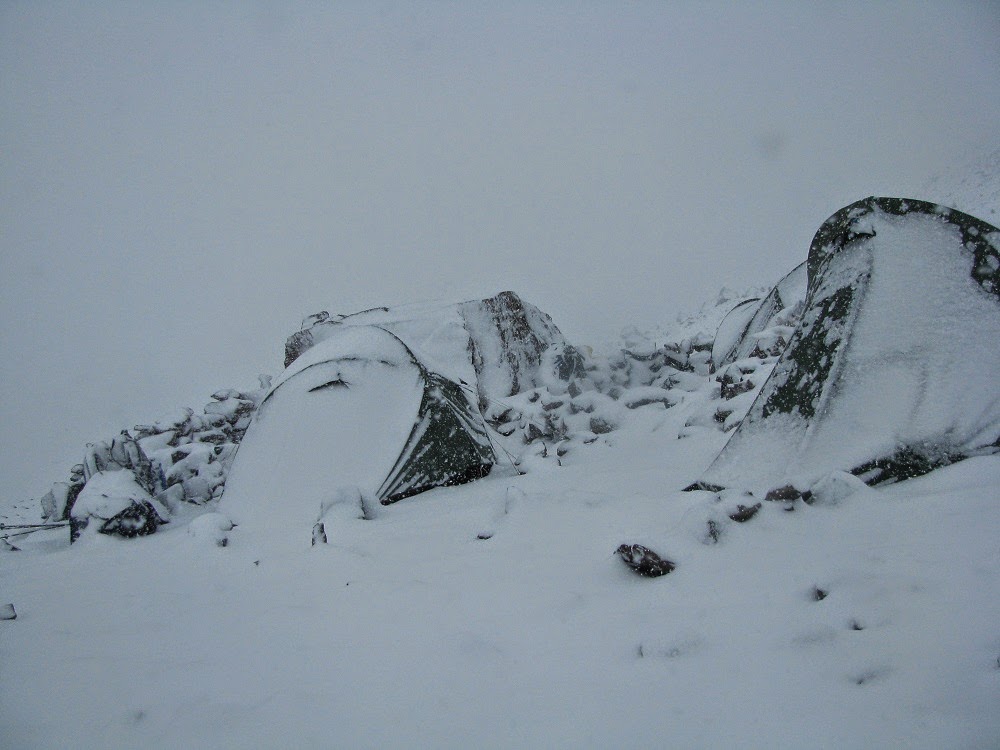 John and Damien cooked dinner for everybody in their tent and brought it around to every other tent. It felt like luxury to have a hot dinner of mashed potatoes, kidney beans and canned tuna in the comfort of my own sleeping bag! I even had the opportunity to use the salt I brought with me. At 7:30 John brought around some chocolate cake and canned strawberries--super good! When I finished eating I thoroughly cleaned my bowl using snow and my liner mittens, which turned out to be very water repellent.

All was done from safely inside my tent. So dinner was actually one of the most comfortable ever for me, since I always get chilled standing or sitting around outside while eating.

Snow was falling just as hard or harder with probably 5 or 6 inches by now. John said we’d probably start out late tomorrow to give the sun time to work. The way it looked outside, it was hard to imagine a clear, sunny morning, but that’s probably most likely! One thing we probably don’t have to worry about is the lack of running water at this camp! Cleaning and refilling water supplies will now be no problem.

At 8PM, while I was sitting at my door watching the doings outside, Brian came around and cleaned off the snow from everybody’s tents. The latest news was that the arieros (mule men) were not staying for the night (though that had been the original plan), but were going down to their camp about half way between Aguas Calientes and Cazadero Grande. That’s bad news for tomorrow, because they might not come back, or might not be back until late, based on weather. 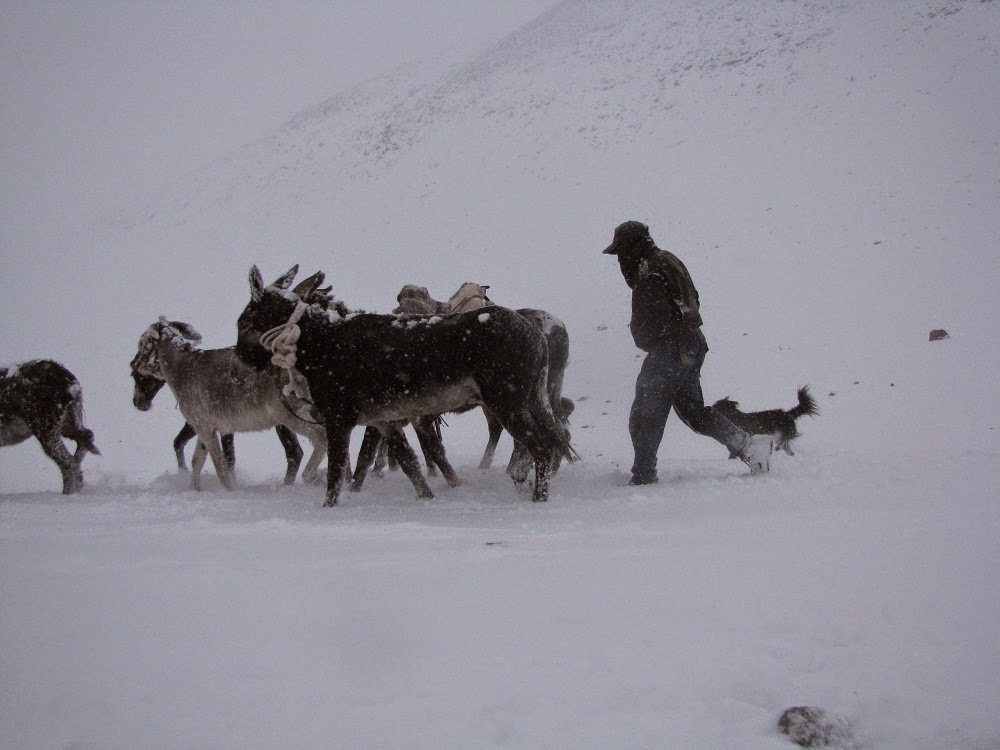 They left at 8:10, and by that time visibility was improving and the snow seemed to be letting up. Soon after 8:30, the snow ended and the wind shifted to the west. By 8:45 there was an orange sunset glow in the sky. We got at least 6 inches from the storm. 8:45 was bed time.