This is part 13 of a 31-part posting of my journal entries and photos from one of the greatest experiences of my life so far--a month-long mountain climbing trip to the Atacama Desert area of northern Chile and Argentina, which included summiting three 6000 meter peaks (~20,000 feet).  To view all the entries in this series, check the posts labeled South America.

I fell asleep quickly and slept really well right through until it was well lit outside--7:30AM. I got up and did some arranging of stuff and finding stuff then started hand washing some of my mountain clothes that were smelly. I set them hanging to dry on roof beams that were exposed to the eastern sun and wind. These beams are for a newly built roof that covers the formerly open courtyard of the hotel. Several of the other guys had been to this hotel before and said the courtyard was full of greenery and birds singing, etc. But that same space, now under roof, has been paved over with concrete. Whatever is planned for it, it is still a work in progress.

The other seven in our group had breakfast in the hotel lobby which doubles as a small dining area. I joined them for the end of breakfast and sat and chatted and visited. It turns out that only one of them, Phinella, was going to see nearby sand dunes, so I decided not to go either. I returned to my room and did most of the organizing and packing for the actual expedition--the camping part--that will begin tomorrow. Before then I have to decide what to leave behind in storage in the hotel. That was done at about 10AM--quicker than I expected. Then I went out to try to find another bottle of water, but all the stores and shops seemed to be closed, being that it is Sunday. I returned to the room and got on the laptop and caught up on my journal while John took a shower.

We all assembled in the lobby at 1PM and went over to a nearby shop for a nice full lunch. They didn’t have sandwiches because of lack of fresh bread, or so they said. As a result, most of us ordered full entrée type meals. I had a nice seared flattened chicken breast with French fries. Then I bought a big new 2 liter bottle of water at a nearby gas station and returned to my room briefly, then waited in the lobby where everybody who was going to the Fiambala Thermal Springs assembled. We ordered a big taxi or van and eventually got a two seat-pickup truck, so John Biggar and I sat in the back on the way up.


The thermal spring area is a nice little resort a half hour drive up the side of the mountains to the east. The pool area was really nice--well maintained with terrace after terrace of pools of different temperatures all the way up to the top one, which was supposedly 45°C.


I tried many of them, and got John to take my photo soaking in the top one. 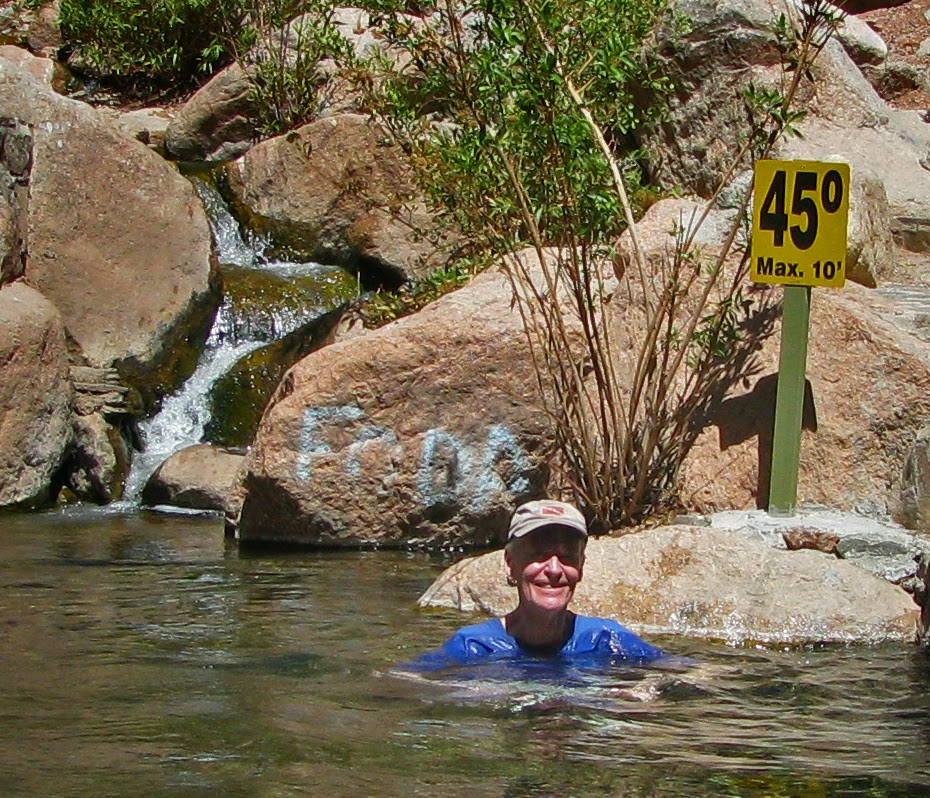 We then had a beer and chat in the dining room and hiked around. I went off on my own and hiked up beyond the source of the spring and back down. The water coming out of jumbled rounded granite boulders at the source was almost too hot to touch--probably around 55 degrees Celsius.


I climbed a little peak below the springs, which was a good viewpoint of the approach road and the wide valley beyond. 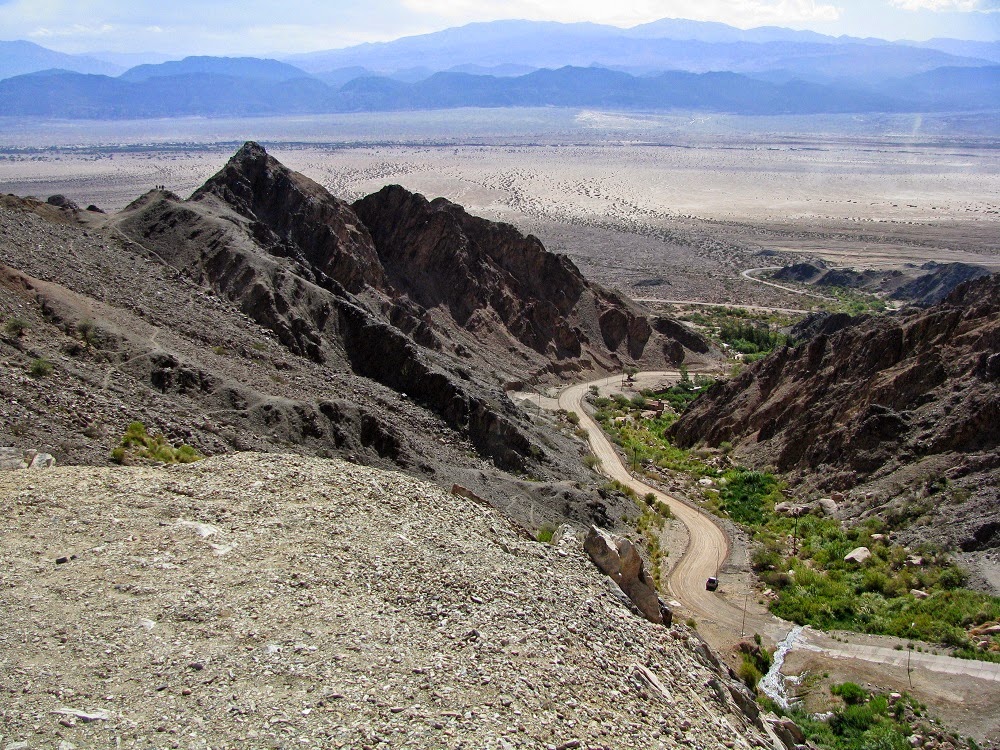 Then we gathered and waited at the parking lot until 6:10 when the taxi driver returned to pick us up.


After the drive home I retired to my room where John, who hadn’t gone with us because he is uncomfortable with the heat, was resting. We had a long, almost continuous conversation, which covered lots of topics and took us right up to the 8:30 designated dinner time. We all walked over to the Pizza Roma restaurant again and had a nice but very filling meal that included big appetizers of two kinds, two bottles of wine, salad and a big entrée--I had ravioli. After dinner those who like coffee went for that and my roommate John and I returned to the hotel. Bedtime was 11PM.