Review of 'A Walk in the Woods' by Bill Bryson 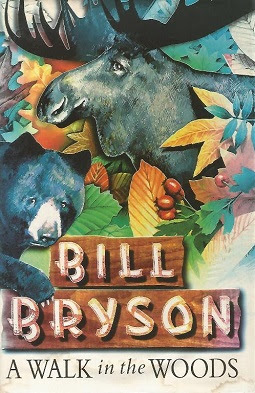 I’ve read ‘A Walk in the Woods’ twice—once before my thru-hike of the Appalachian Trail and once after.  My impressions were much the same after both readings.  That’s because this is not the story of a thru-hiker’s experience.  It’s not even about a guy who failed his valiant attempt at thru-hiking but still wants to do the whole trail.  No, it’s more complicated than that.  Read on …

First of all, Bill Bryson's gift for humor is natural and delightful; and that's what makes ‘A Walk in the Woods’ the bestselling book on hiking the Appalachian Trail of all time, and the only one with the distinction of having been a New York Times Bestseller. As a member of the Appalachian Trail Conservancy (ATC), I found the research and factual elements of the book to be well done. But as an avid hiker who hiked the entire trail twice in one calendar year—2012—I was disappointed to learn how little of the trail Bryson actually covered.

The story follows Bryson’s 1996 thru-hike attempt from the planning stages, during which he recruited an old friend, Stephen Katz (a fictitious name) to hike with him.  Katz becomes a foil for a good deal of the humor through the book, some of it at the expense of ATC’s code of trail ethics, called ‘leave no trace’.   Bryson describes Katz as hurling various heavy belongings over cliffs and into the woods in order to lighten his load, and other reviewers have criticized him for approving, or tacitly advocating what amounts to a misdemeanor offense in most of the states through which the trail passes.

Bryson and Katz depart Springer Mountain, GA, the southern terminus of the trail, on March 9th.  It’s clear that the intent was to hike the whole trail.  But like so many before them (an estimated one in four succeed according to the ATC), this pair found the rain and mud and discomfort of the trail to be too much.  They got off the trail at Newfound Gap in the middle of the traverse through Great Smoky Mountain National Park, having hiked only 200 miles.

In describing his thoughts at this pivotal moment of ‘getting off the trail’, Bryson distills his feelings with this quote:  “A whole dimension of drudgery—the tedious, mad, really quite pointless business of stepping over every inch of rocky ground between Georgia and Maine—had been removed.  We could enjoy ourselves.”  I believe that every person who has ever long-distance hiked can identify with the sense of drudgery that can nag at us on bad days.  For me, and probably for most others who do not ‘get off the trail’ but keep pushing on, the ‘we could enjoy ourselves’ moments outweigh the moments of drudgery, or at least mitigate them enough to keep us going.

Bryson and Katz returned to the trail at Troutville, VA and hiked another continuous 240 miles to Front Royal, at the north end of Shenandoah National Park.  That was about it for any real long distance hiking.  On his own, Bryson hiked bits and pieces of trail, mostly as day hikes and short excursions, mostly near his home in VT and NH, plus a few bits of PA.  Finally he and Katz hiked 66 more miles from Caratunk, Maine to Katahdin Iron Works Road, and that’s where they gave up.  They never made it to Katahdin—the mountain at the northern terminus of the trail.  And as far as I know, Bryson has never climbed Katahdin, though he promises to do so in this book.

Fine.  He ‘hiked his own hike’—a phrase that comes close to a universal ‘religious’ creed among the congregation of AT hikers.

But here’s my problem:  This book continues to ‘pretend’ to be a comprehensive ‘guide’ or ‘report’ about the AT.  The back cover blurb makes this blanket statement: “The Appalachian Trail stretches from Georgia to Maine and covers some of the most breathtaking terrain in America.  If you’re going to take a hike, it’s probably the place to go.  And Bill Bryson is surely the most entertaining guide you’ll find.”  Not one word, not even a hint or suggestion that he failed to hike the majority of this ‘most breathtaking terrain’ and so he doesn’t qualify as any sort of guide to most of the trail.  False advertising, blatant and unabashed.

Yet my greatest complaint about the book is about the writing itself.  The first half of the book was much more enjoyable than the second. My paperback edition is 400 pages, and the first 150 of them cover just that first 200 miles of hiking between Springer and Newfound Gap.  From there, not only did Bryson’s through-hiking dreams sputter, but so did the narrative drive of his prose.  The humor as well as the story lost momentum at that point and never regained it.

Another point significant to me: Born in Iowa, Bryson became an ex-pat when he moved to England in 1977.  His ‘discovery’ of the Appalachian Trail happened when, in 1995, he moved back to the US and settled in Hanover, NH, where the trail goes right through the middle of town.  Less than a year later he made his thru-hike attempt.  And then in 2003 he moved back to England.  I don’t quite know why, but that final move away leaves me cold.  So many of my friends who have hiked the Appalachian Trail, both thru-hikers and section hikers, have fallen in love with it, want to be close to it, want to come back and hike it again.  Bryson does not share this sentiment.  There’s no hint in the book that he has any deeper connection with the AT, and his move away from Hanover just seals that in my mind.  It’s sad to contemplate, but I’m left wondering whether this most popular of all AT hiking books was little more than an exploitation—a chance to make some money.