Karma: what goes around comes around 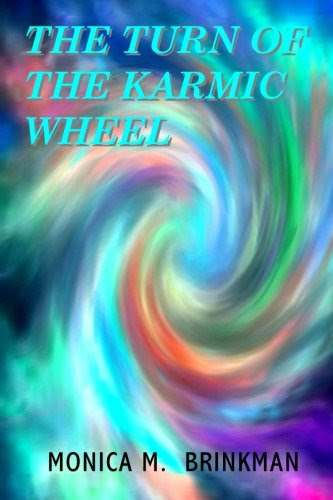 Monica Brinkman wears a lot of hats.  She has owned a community theater, performed as a 'Singing Telegram', done radio commercials, acted in plays and musicals; and she paints.  Now she has written a novel that can be described as Speculative, Horror, Spiritual, Paranormal, and just plain unique.  The Turn of the Karmic Wheel, published in 2010 by All Things That Matter Press is a spiritual adventure of the soul, as one fictitious town, Raleigh, MO, faces the full force of Karma.  The book explores a collection of characters and follows their choices as their seemingly disconnected lives are shown to be linked.  Check out this new trailer just released in connection with the release of the Audio-book version.

Here's my chosen review, one of many available for this book.  I try to find a review that speaks to me and best informs me of the character of the book - a very personal choice.  This review is by Star at the Bibliophilic Book Blog:

"Karma: (1) In Hinduism and Buddhism - action, seen as bringing upon oneself inevitable results, good or bad, either in this life or in a reincarnation: in Hinduism one of the means of reaching Brahman.(2) In Theosophy - the cosmic principle according to which each person is rewarded or punished in one incarnation according to that person's deeds in the previous incarnation. (3) Fate, destiny. (4) The good or bad emanations felt to be generated by someone or something. [From Dictionary.com]

"Gossip and reputation make sure that what comes around-a person who is cruel will find that the others are cruel back to him, and a person who is kind will find others are kind in return. Gossip paired with reciprocity allow karma to work here on earth, not in the next life." - Jonathan Haidt

The Turn of the Karmic Wheel is truly a story to take to heart. It cautions us against being self-centered, hateful, and prone to venial sins. We all have choices in this life and it's up to us to make the best of what we're given. If we follow the Golden rule, we can reap the rewards of kindness, love, and reciprocity in this life. Each character's story seems at first to be a separate entity, yet as we move along in the book, we are shown that everyone in the world is connected to one another. Yet, we can all lose sight of that message and let darkness seep into our souls. The characters are well-developed and each has flaws - no one is entirely good or entirely evil. A beautiful blend of mysticism and spirituality, Ms. Brinkman has written an unforgettable and moving tale which will make you re-evaluate your own actions"

Monica  grew up in Pennsylvania, relocated to the West Coast, and now resides in the Midwest.

This is the fifth of a short series of Author profiles that features fellow authors in the All Things That Matter Press family.
Posted by PJ Wetzel at 3:48 PM