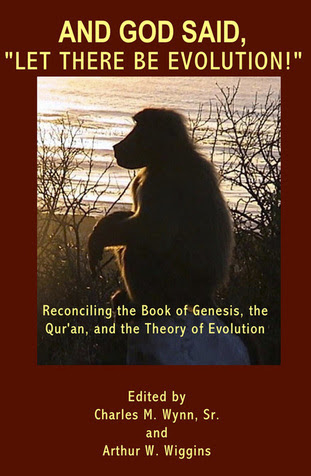 I am so honored to be invited into the All Things That Matter Press family.  I get to rub elbows with kindred spirits like this pair of creative, imaginative and prolific scientist-writers, Charles Wynn, Professor of Chemistry, and Arthur Wiggins, Professor of Physics.  As a Ph.D. in Atmospheric Sciences myself (a branch of physics), and long time NASA researcher, I had great fun learning about the work of these distinguished gentlemen.

This dynamic duo has published four previous books over the last two decades, all of which seem geared to a teen/YA audience, and all of which educate and elucidate the novice into the exciting world of science.  To my way of thinking there is no more noble calling.  Two of these books have become standard classroom textbooks.

Now Charles and Arthur have teamed up as editors to tackle a sticky and sensitive issue.  Where is the middle ground, and is there common ground, between scriptural literalists and Darwinian science?  In 'And God Said, "Let there be Evolution"' they have enlisted three scientists/scholars of faith, one each from Judaism, Christianity, and Islam, to explain how they reconcile their deep-seated religious faith with the scientific evidence for the Theory of Evolution.

No work that tackles this field is going to be 'the last word.'  The opinions of three individuals, no matter how highly educated, is not going to sway those who adhere to a world-view that faith prevails over reason.

I am in the delightful position of having a well-educated Electrical Engineer daughter who is a devout Christian biblical literalist.  Our discussions are always lively.  My bias--my 'world view'--is opposite of hers.  As a Ph.D scientist and long-time atheist-agnostic, my knee-jerk reaction to someone who would establish their belief system based on a 2000 year old 'immutable, infallible' truth is "you've got to be kidding."  But hang on a minute.  If you truly adhere to your faith in 'critical thinking' and the open-ended nature of the scientific/rational process, wherein nothing is considered to be absolute immutable fact, (pending discoveries not yet made) then you cannot rule out the possibility that your 'faith' is just as unsupportable as theirs.

What I cling to is that we've uncovered a lot more evidence in the past 2000 years, so maybe those old texts ought to be updated.  What I admit is that there is a line of reasoning that asks: What if evolution is not random 'Natural selection' but a pre-programmed maturing of the universe toward an end that the Maker intended all along?  I explore these questions in great depth in my novel 'Ice King'.

Okay, it's involving myself in these sorts of ever-evolving discussions that brings the sparkle to my heart.  Let the discussion continue :-)  Here is my selected 'best' review of 'And God Said, "Let there be Evolution".  It's from Dr. J. Harold Ellens:

"Art Wiggins is a truth-teller of the first water. He has published, to genuine acclaim, such volumes as 1)The Joy of Physics, 2)The Five Great Ideas in Science, 3)The Five Biggest Unsolved Problems in Science, 4)Quantum Leaps in the Wrong Direction: Where Real Science Ends ... and Pseudoscience Begins; and now he inspires us with this new work on evolution, the biblical story, and a critique of the various creationism ideas. This volume proves to be a highly readable, popularly crafted, and comprehensive address to the fact that the overwhelming accumulation of verifiable scientific evidence demonstrates the universe and life on this planet has evolved over the long reach of time from early, simple forms of energy and material into increasingly sophisticated forms including life as we can know or discover it. The genius of this volume lies in the fact that Wiggins and his co-editor, Charles M. Wynn posed the question, "Is it possible to reconcile the Theory of Evolution with the Scriptures?" and then engaged three religious believers who are also scholarly scientists to provide thoughtful answers. Rabbie David Kay, Professor Howard Van Till of Calvin College, and T. O. Shavanas, a Muslim Physician responded with scientific evidence and argument, making it clear that accepting evolution does not require abandoning one's faith. In simple scientific prose that is laced with evidence of the authors' spirituality and with the relevant data from sacred scripture, these scientists demonstrate how their faith illumines their science and their science illumines their faith. The upshot of the whole work is a gratifying demonstration that evolution is the method God used to grow the universes and our world here on earth. I call this Theistic Evolution and am convinced that it is the only theory that handles all the scriptural and scientific data honestly and makes utter good sense. I believe that any other perspective betrays and falsifies the wonder of God's nature and work. Every high school and college student should read this work, and every believer should master it. This work ought to be a run away best seller because everyone should know of it and know it well. Sell you bed and buy this book."

This is the second of a short series of Author profiles that features fellow authors in the All Things That Matter Press family.
Posted by PJ Wetzel at 4:11 PM