The big one - Mount Washington - was on the agenda today.  But logistics demanded that I drive to the summit before hiking.  It felt awful, arriving without any effort, mingling with the tourists, checking out the full service snack bar, gift shop and museums.  I never felt so *not* like a hiker while actually standing on the Appalachian Trail setting my foot officially on the Geodetic Survey marker at the precise summit before heading out.  There I was mingling with the giddy groups of shivering folk getting their photo-op at the summit marker on this windy (30-40mph), chilly (39F when I got there, high at the summit was about 46F), morning.  Wind chill was below freezing.

Then off I went, into my element, where the crowds don't go.  Lakes of the Clouds Hut is not visible to the tourists from the summit, though it's a hot destination for the hiker-tourists - accommodates more than 100 at a time - and a lot of them were beginning their ascents as I came down.  It was a pretty sight, tucked at the base of Mt. Monroe.  Pretty close-up too, with one of the two little 'lakes' in the foreground  (that's the huge Mt. Washington Hotel down in the valley behind):


As you see, visibility-wise it was a perfect day to be on Mt. Washington - official visibility was 100 miles.

Okay ... I've avoided showing the summit.  No shots full of random yammering tourists for me.  No clutter of buildings and towers.  It's a rare perspective, but as luck would have it I did get my kind of shot of the actual summit of Mount Washington, free of tourists, buildings hidden by the rocks, and taken from the hiker perspective - looking for directions to follow, this is the sign near the snack bar, with the actual summit sign behind: 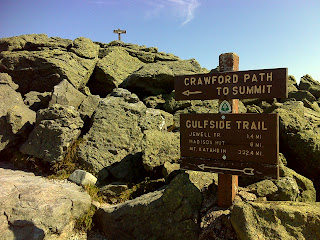 And this is what the summit looks like from the Hut lake: 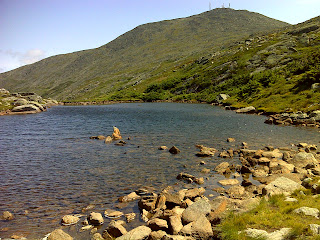 The trail goes around the actual summits of three more mountains before going over Mt. Pierce (where I turned around and came back north).  But being out in the open tundra, the views are endless and superlative.  Here's the view of Mt. Franklin looking south from the slopes of Mt. Monroe: 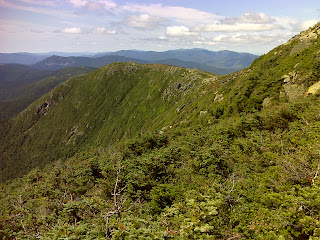 And here's the next view - of the meandering walk toward and around Mt. Eisenhower, taken from the south side of Mt. Franklin: 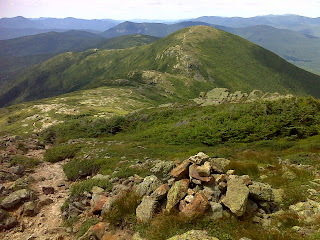 The trail was relatively easy today - lots of rocks but no serious scrambling, even plenty of level walking.  I still prefer the grassy high meadows of Hump Mountain in the Roan Highlands, but today's walk ranks up there among the truly memorable ones.

And the best part: I come back tomorrow, hauling my two ton steel tent to the summit again, playing tourist for a few minutes, and then heading north around the Great Gulf and across the iconic saw-tooth spine of the northern presidential range.  Weather promises to be even better tomorrow - visibility at the summit is already up to 130 miles as I write this, and the wind is forecast to be light under sunny skies.  Got my fingers crossed ...

Here's a plot of my route on a map, with a link to all the other photos I took that I thought were worth showing:

AT Day 182 - Mt. Washington, north side at EveryTrail
EveryTrail - Find trail maps for California and beyond
Posted by PJ Wetzel at 3:45 AM