Four Shelters and a pond

The Randolph Mountain Club maintains about 100 miles of trail in the White Mountains, mostly on the north side of the Presidential Range.  Here they also operate four shelters, all clustered within a few miles of one another and all within a mile or two of the AT ... so they are officially named in the AT guidebooks as trail shelters.  Nevertheless, evidence from the log books at these shelters suggests that few AT long distance hikers venture down to any of them.  To do so requires 1000 feet or more of descending (and then climbing the next morning), and there's the Madison Spring Hut right on the AT not far away.

But ... one of the goals I've set for myself on this adventure is to visit and photograph every official AT shelter.  I couldn't do it by coming down from the AT, so I took a separate day - today - to come up from US 2 via the Lowes Path and do a 7.8 mile circuit hike to visit all four at once.

It took most of the day and I never touched the AT.  Finally late in the afternoon I went back over to Pinkham Notch and hiked 0.9 miles of official Appalachian Trail - the Lost Pond Trail.

That was today's itinerary - it felt like I was wrapping up loose ends.  The weather was getting hotter and the visibility was down (just 30 miles on Mt. Washington).  It was a good time to get this 'chore' done.

And as it turned out, the 'chore' led to some interesting experiences.  I got to hike some of the lesser known trails around the Whites and learned to appreciate these diverse 'Paths' as they call them.  Many of them were built as far back as the mid 1800's, and most were in place before 1900.  And they reflect the personality of the trail builders.  Some are wicked steep, built by the macho types, such as the upper end of King Ravine Trail.  Others are deliberately gently sloped, such as Randolph Path.  It seems Mr. Randolph was of the opinion that ladies in their full skirts should be able to walk his path comfortably.  It sidles its way along the slopes all the way up to the ridge at Edmand's Col, never very steep, though I can't see ladies in their finery scrambling over some of the oversized rocks that the Randolph Path negotiates.  Yet I did see evidence of some old steel pins and such - perhaps one day long ago there were fixtures in place that made the going easier than it is today.  It's said that some of the macho types refused to hike Randolph's Path, declaring that it was for sissies.  If I hadn't made today's hike, I would have been oblivious to all this rich and varied history of the trails and the trail building pioneers in the Whites. 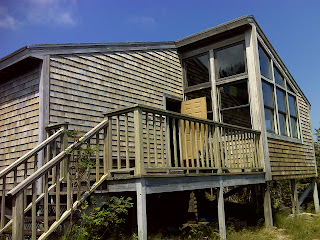 And I would have missed the palatial Crag Camp Shelter.  This place is every bit as luxurious as a hut except for the fact that the caretaker doesn't cook for the visitors.  The interior is bright and clean and roomy. 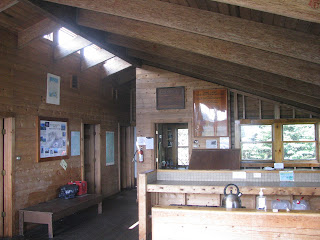 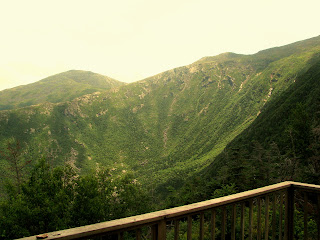 The living and dining space has a vaulted ceiling with two-story picture windows that look over a vast rugged cirque (King Ravine) on the slopes of Mt. Adams with the summit of Mt. Madison beyond.  It's a view to die for - and it only costs $13 to stay there in one of the three bunkrooms.  AT hikers take note!

Finally in the afternoon I did Lost Pond - a gnarly little bit of trail that you might expect, based on the map, to be easy and flat.  After all, it just follows the highway for a mile before handing the AT over to the Wildcat Ridge Trail for the serious ascent north out of Pinkham Notch.  But this little bit of trail struggles to get you through some major boulders and has a bit of climbing/descending on either end.  In the middle, perched above the valley and appropriately hidden from the highway is Lost Pond, here reflecting Mount Washington's summit.

So it was a day with little forward progress, but a ten mile hike that was special in many ways.

Below is a map of today's two separate bits of hiking: the 7.8 mile loop to visit the shelters up north, and the short bit of AT in Pinkham Notch at lower right.  Unfortunately the two hikes are connected by a straight line that is an artifact - the EveryTrail software connects points on a track whether they should be connected or not.  If they only plotted the actual points recorded by the GPS, this line wouldn't be there.  Anyhow, the red pins show where I took photos, and you can see them by clicking the title line above the map:

AT Day 185 - Lost Pond, Pinkham Notch at EveryTrail
EveryTrail - Find hiking trails in California and beyond
Posted by PJ Wetzel at 12:01 AM