Smarts Mountain, the ups and downs 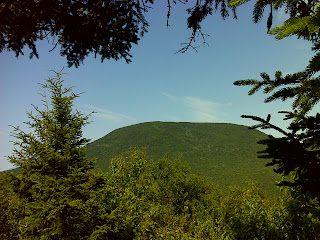 It was a fairly long day of hiking, yet basically all I did was climb up Smart's Mountain and down the other side and then turn around and go back up and down it again.

The south side climb comes in two steep steps.  The lower half takes you up to a long section of bedrock spine approaching and then walking along Lambert's Ridge at 2350 feet elevation.  The bedrock, tough on the ankles because of its unyielding surface and constantly varying pitch, lasts most of a mile.  That's where the above photo was taken.  Then the second step is seriously steep and climbs up more bedrock on a slope that had managed to accumulate 8 to 10 inches of topsoil in the 10,000 years since the glaciers retreated, and had managed to lose it all in the few years the trail bullied its way through.

At the top of Smart's Mountain, as you can see above if you look close, there is a fire tower (and also a hiker's shelter that was formerly the Fire Warden's Cabin).  The views were spectacular up there, and made up for what I missed on the two dreary fogged-in days I climbed Killington. 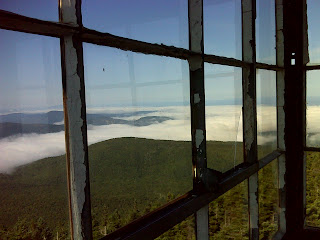 I could see Killington and Mt. Washington with about equal clarity, as Smart's Mountain is roughly half way between the two.

The north side of Smarts Mountain is much more serene, taking four miles to descend in steady, gradual sloping trail.  That was a pleasure to walk both ways, even on this relatively hot day.  There was no cooling breeze, but fortunately the humidity wasn't nearly as bad as it was two days ago.  Still, I brought 2.5 liters of water and two cans of soda with me and drank them all.  The forecast for the next few days looks ideal - cooler and drier.  Ah, the pleasures of summer in New England!

Here's the map of today's hike and along with the elevation profile: