It took nine hours to hike five miles of trail today - virtually all of it difficult.  This was the section of the AT called the Wildcat Ridge Trail.  Here's what the AMC guidebook says about this trail:

"The sections from Lost Pond Trail jct. to E Peak and from A Peak to Carter Notch are very steep and rough, and there are several ups and downs and other steep, rough sections along the rest of the trail that make it more difficult and time consuming than one might infer from a casual glance at the map or the distance summary."

And a sample of the south-to-north detailed trail description:


" ... Lost Pond Trail enters on the left and the trail shortly begins the very steep climb up the end of the ridge (use care on all ledge areas).  The first pitch up rock steps and a ladder leads to an outlook across Pinkham Notch.  After a tricky traverse and a fairly difficult scramble up a rock chimney, the trail crosses a ledge with an excellent view of Mt. Washington ..."

I'm really glad I bought the AMC guidebook.  Its trail descriptions are much more practically useful than those in the AT official guidebooks - more along the lines of what I've been trying to write in this blog - descriptions of the nature of the footpath itself, not just a list of landmarks that you pass.  And the AMC guide provides hiking times between landmarks on all of its trails.  Those times are a huge help in planning.  They have proven to be very close to my actual hiking times (I guess I'm an average hiker overall).

So I knew I was in for tough trail today.  What I didn't bargain for was all the rain showers.  There were five or six of them during my 9 hours on the trail.  None of them were heavy or long lasting, but they kept the rock wet, and with all the sketchy footing on sloping bedrock today, my pace was excruciatingly slow, especially on descending.

Of course, when you're on such rugged trail, you expect some rugged vistas.  And the weather gave me a break as I passed the best of them.  Here's the view down into Carter Notch, with the Hut 1000 feet below beside its little lake:


And at the other end of this bit of trail, the views of Pinkham Notch weren't too shabby either.  Here's a look down on the Visitor's Center: 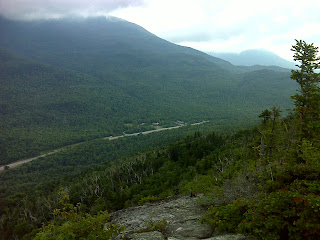 Not only was it a slow day, it was tiring.  I started with fresh legs, having taken a zero day yesterday.  But by the end of the day I was well and truly worn out.  For those of you considering an AT thru-hike or some other variant that takes you through the White Mountains, make allowances in your planning for your daily miles to drop considerably.  Its a beautiful place, but in some sense you could call the White Mountains "Pennsylvania on steroids" ... or "Pennsylvania with mountains and views" ... or "Pennsylvania with huts and tundra".  The point, which I've not heard verbalized before, is that when all else is said and done the White Mountain trails are *rocky* with a capital ROCK.

Here's the map of today's hike, with a link to more photos:

AT Day 186 - Wildcat Ridge at EveryTrail
EveryTrail - Find hiking trails in California and beyond
Posted by PJ Wetzel at 8:36 PM