I'm not superstitious ... or am I?  Hiking today, I found myself being more cautious than usual.  Yesterday, near the end of the day, I slipped on a round rock crossing a stream and got wet feet.  Didn't want any accidents today.  It was going to be a hard day, and when I wear out at the end of the day, my feet don't always go where I want them to go.  But in the end I survived Friday the Thirteenth.  Nothing bad happened.

Actually a lot of good stuff happened.  There aren't many hikers who get to ascend Mt. Lafayette from three different directions on two consecutive days.  Yesterday I came up from the south.  Today I started my day by coming up a side trail from the west - the 'Old Bridle Path'.  It offered some nice views on the way up, and took me past some blooming bog laurel bushes.  The flowers come close to magenta in color - very showy. 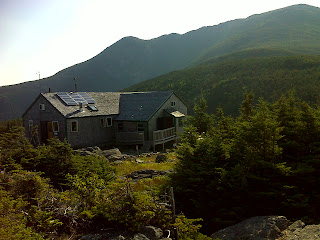 Then I got to visit the pleasant, very clean Greenleaf Hut along the way.  It was a hot climb on this side trail - the 4.0 miles that I needed just to get to the AT don't 'count' but had to be done.  Finally at 9:45AM I was at the summit of Lafayette and back on the 'official' trail.  It was hot, even on the summit - one of the hottest days you'll ever get in the high mountains - it reached 65 degrees on the summit of Mt. Washington!   But the tundra on the north side of Lafayette was nice - much less trampled than the trail between Lafayette and Mt. Lincoln in the other direction. 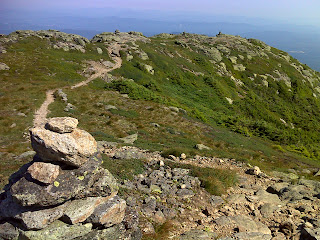 And the view was magnificent - back to Greenleaf Hut, Franconia Notch, Cannon Mtn Ski Area at right and in the distance behind Greenleaf Hut and its little Pond, you could see Lonesome Lake and its Hut with the double peaks of North and South Kinsman behind. 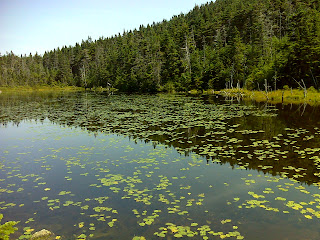 Then I plunged into the woods again and made the difficult crossing of the knobby saddle to Mt. Garfield.  On the way there's a little side trail to another of the shallow high mountain ponds filled with water lilies.  This one is Garfield Pond.  On the summit by the same name the views are equally nice, but it was continuing to slowly get more hazy by the hour.  That had been the trend for a few days and looked to continue for a few days more.

I turned around at Garfield and made the same tough transit back to Lafayette, summiting it from the north during the afternoon.  I was shocked to find myself alone at the summit this time.  On both previous visits it had been more like Times Square than a remote mountain summit.


Then it was back down past Greenleaf Hut and home - a twelve hour day with lots of elevation change in order to check off just 3.5 more miles of the AT.  That's what it's going to take to get through the Whites by day hikes.

Here's a map of today's hike followed by the elevation profile: