Out of 173 day hikes on the AT this year, today's was the best.  I love the bald summits, and this was a great one - the first *real* bald - genuine tundra.  And I got to cross it both ways on a gorgeous day.  But what made today's hike the best overall was that I also got to be up close and personal with Beaver Brook Cascades - 1000 vertical feet of waterfall after waterfall with the water practically splattering your toes as the AT hugs the stream.  Here's a sampling - first at the 2700 foot level:


Here at 2400 feet the photo doesn't do the spot justice - too much bright-dark contrast, but here the AT comes off the big stone steps you see at left and goes out on the bedrock, giving you a view of a series of falls dropping perhaps 250 feet.  This is my new favorite waterfall view on the AT, trumping the former favorite - Sage's Ravine.:


Note, however, that if Amicalola Falls were actually part of the AT, it would still be my very favorite.  Anyhow ... near the bottom, at 2100 feet, this view is also right on the trail, which you can see at left: The trail beside the falls is steep and difficult - much more difficult than the summit approach from the south - but I barely noticed.  It was pure pleasure to be able to first descend this section, with its wood wedge steps and occasional re-bar hand-holds, huge stone steps, etc., and then to turn right around and ascend it.

There are more difficult stretches of trail south of here.  The north side of Dragon's Tooth and the north side of Bear Mountain, MA are two examples.  But in terms of vertical extent (total elevation change while negotiating such tough trail) this is the biggest and baddest so far.  The worst part is actually the upper section, where the trail leaves the cascades behind and passes Beaver Brook Shelter.  The quarter mile of trail below the shelter seems interminable - took me most of half an hour to get through both climbing and descending.

Okay, I'm a waterfall lover, so I've spent lots of energy here describing the Beaver Brook Cascades.  As far as bald summits go, I still love Hump Mountain, in the Roan Highlands as my very favorite place on the trail.  But I've yet to do the Presidentials.  We'll see if it holds up.  But if Moosilauke provides a good sampling, it's going to be a tight competition.  Here are a few more shots.  Driving north on NH 25 approaching Glencliff, Moosilauke appears an imposing massif: 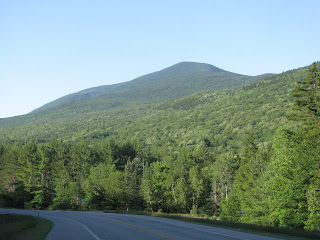 Yet the summit tundra area is barely 100 acres of concentrated joy.  Here's a first look, approaching the summit from the north, with the stone foundation ruins of the former summit lodge: 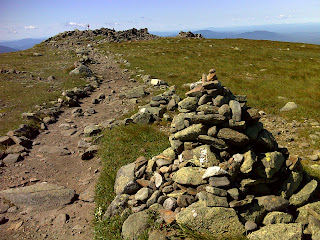 Here's a look back toward the south from tree-line at the approach from the south: 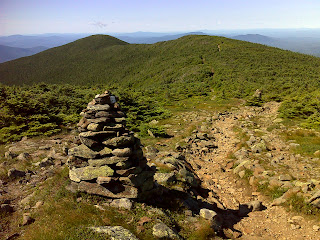 And a look toward the northeast from just above timberline, with Mt. Washington at right.


It was a pretty tough 7.7 miles of trail to cover both ways in one day.  Took me eleven hours.  But in the end I was so energized by the experience that I wanted to do it all again.  What a shot in the arm!  For me, this is what it's all about.

Here's the GPS track in two parts, south, then north, and the elevation profile--more than six thousand feet elevation gain and loss, out and back: