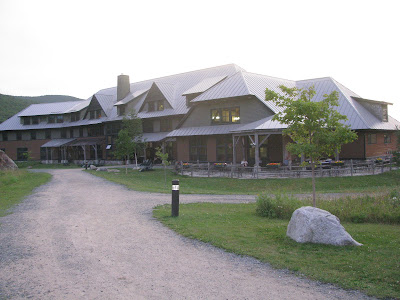 The forecast called for a 70% chance of rain, including thunderstorms, hail, high winds, and tornadoes.  Tornadoes!  Meanwhile, my ankles, toes and every other bone in my feet were crying out for a break from the long hard days over rock and rill.  And here I was - just a couple miles down the road from AMC's centerpiece in the Whites, the Highland Center - a hostel and hotel that is the very epitome of a hiker-friendly home-away-from-home.

So how could I resist?  I settled in for a zero day - the first one this entire year that I did not resent.  I really needed it.

The forecast materialized.  By 9:20AM it was pouring.  It remained stiflingly humid all day even when it wasn't raining.  But the showers continued on and off through the day and well into the night.  After filling up at the buffet breakfast bar I headed out into the rain in my 'two-ton-steel-tent'-mobile and drove up to Gorham/Berlin and did some scouting.  But for the bulk of the day I just relaxed, slept, showered, ate, and finally caught up with writing these blog entries.  In recent days there just hasn't been enough time to write a coherent blog after hiking for 12 exhausting hours.  And I didn't want to take a break while the weather remained so good.

But today the skies opened up, and lots of little bytes of my trail memories found themselves streaming out into the 'Cloud' that was once called the 'world wide web'.  Hope you have a chance to read a bit of it, and I hope it's worth your while.  Cheers!