is only two and a half miles (parking area to parking area). But that was enough today (Monday, March 12th). Mostly it was a rest day. The high mountains were deep in fog and heavy drizzle all day. Down low it was mild and cloudy, no rain until late afternoon. A good day for a five mile stroll. 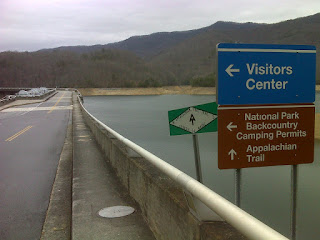 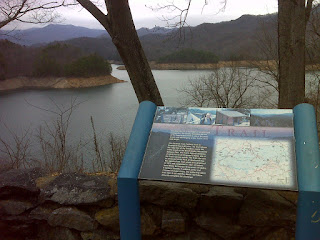 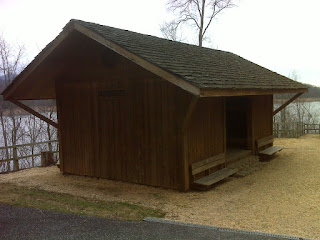 The 'Fontana Hilton' is a special shelter, not so much because of its size or construction - there are many better and bigger - but because of its setting, because of the well-stocked 'trail magic' box inside, and because of what's a hundred yards down the trail: a rest room with heat, electric light, and a shower with hot water. This is hiker Nirvana.

As I was leaving the 'Hilton' headed southbound I passed three guys ... said 'hi' ... and went on. But I began to ponder those faces. I had seen them before. And then it struck me. Facebook! These are the three characters who call themselves 'Northbound 2012, amateur sports team'.

Update - I stopped in at the 'Hilton' early the following morning before hiking and had a brief chat with the team. Nothing in-depth, but at least we got the chance to connect. Best of luck, guys!

Here's the 'track' of today's little hike. The link takes you to a slide show with many more photos.
AT Day 67 - Fontana Dam at EveryTrail
EveryTrail - Find the best Hiking in Great Smoky Mountains National Park
Posted by PJ Wetzel at 10:27 PM