I guess they named the balds in this area a long time ago. There are a lot of them. Since being named, many have reverted to forest, likely for the first time since the last ice age.

Balds are beautiful. The sense of expansive space they give you when standing on top of a good grassy one can't be beat. Standing on a tree infested 'hairy' bald does you no good at all ... unless there happens to be an observation tower. 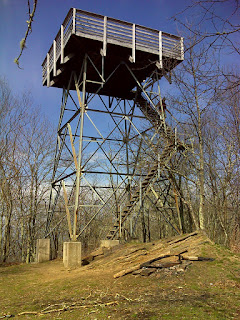 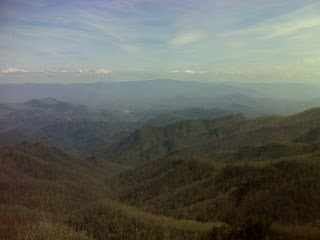 Wesser Bald, my primary destination today (Monday March 19th) has just such a tower. And although there was a touch of summer haze, you could still see Fontana Lake and Clingman's Dome. 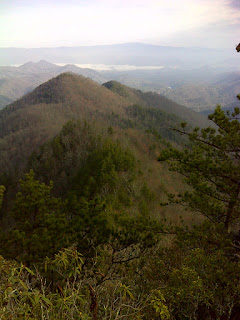 The rest of today was getting there and getting back. The climb to Wesser Bald from the Nantahala River covers 2800 vertical feet in about five miles. But a 500 foot chunk of that is accomplished very quickly, on a ridge scramble called the 'Jump Off' - twin brother to the 'Jump Up' to Swim Bald on the other side of the river. At right is the view from a rock outcrop near the top of the Jump Off. The trail follows the ridge shown, and the closer-in part not shown because it's so steep.

Weather was an issue - it was too hot to hike comfortably, even up at 4500 feet. But the above-80 temperatures are making for a quick transition through spring. Red buds are blooming, and along the trail, the wildflowers are springing up in profusion. 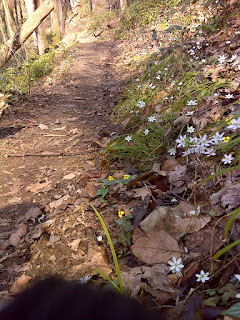 It won't be long before we hikers find ourselves deep in the 'green tunnel' again. It will be a welcome change.

Here's a map of today's route with link to more photos: