Lobby your congressman - demand a return to a Flat Earth!
Oh, how I wish such a bill had been passed before today (Sunday, February 26th, day hike number 51 in this series). 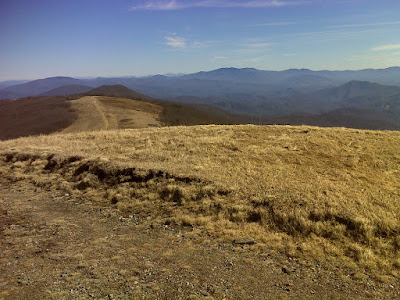 I have stood atop high peaks in Bolivia and seen to the Pacific Ocean. I've stood atop fourteeners in Colorado on days when you can nearly see Kansas. But east of the Mississippi I've never experienced better visibility than I did this morning. 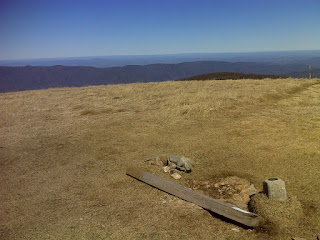 The view from the summit of Bald Mountain (Big Bald) is as spectacular as advertised - 360 degrees of unobstructed horizon. And today the visibility was unlimited. If the 'law' governing the Earth's curvature could be relaxed, even just a little, you could have seen the Atlantic Ocean. As it was, I'm pretty damn sure I could see West Virginia, Kentucky, Georgia, South Carolina, and, of course, Virginia, North Carolina and Tennessee. I wouldn't rule out Ohio. Look at the horizon in this view toward the WNW and see if you don't agree.

In the first shot above, you see Unaka Mountain on the left (Beauty Spot was visible in front of it but hard to see in this low-resolution version), with Flat Top Mountain in front of that, and Little Bald to its right. Right of center is Roan Mountain, and far away to its left you see Mount Rogers, then even more distant ridges that the AT traverses in Virginia. 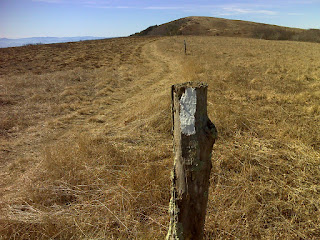 I was alone atop Big Bald this morning. The wind was calm. The sun was bright, and the temperature was cool but comfortable. It was perfection. I couldn't help but exclaim aloud - more than once in fact: "Wow!" Even as I was approaching the summit from the north, I knew this experience was going to be special, even for a 63-year-old who's already passed over half a dozen of the iconic 'balds' of the NC-TN border.

There was some other cool stuff today, but Big Bald eclipsed it all. There were views from Little Bald and High Rocks. There were the incredibly emaciated never-give-up giant birches on the ridge between Big Bald and Little Bald, and there were long climbs on either side. But I'll just leave you with one other image, appropriate to my recent obsession with the AT logo. This example is emblazoned on a monolith near Whistling Gap, which does seem to be a place that funnels the wind - it was windier there than on top of Big Bald.

"Wow!" I still feel like pinching myself. Why couldn't the Earth have been flat today?? "Wow!"

Here's the GPS generated track and a link to a bunch of additional photos:

AT Day 51 - Big Bald at EveryTrail
EveryTrail - Find the best Hiking in North Carolina
Posted by PJ Wetzel at 4:37 PM