Trail Magic - provided by 'Trail Angels' - is freely given, unexpected, and not-asked-for help provided to long distance AT hikers, usually in the form of food or water, sometimes left anonymously on the trail, sometimes provided by a friendly good Samaritan, usually a local resident. Today I ran across my first serious example of Trail Magic, but what's better, I had the opportunity to pass on news of it to three deserving Northbound Thru-hikers.

I started the day (Friday 2 March) at Tanyard Gap, not far from Hot Springs, NC. The trail northbound from there makes a relaxed ascent passing a nice piped spring and an almost perfect natural root AT logo missing only a 'cross-piece', so I indulged my ongoing obsession by adding a single stick to complete it and took a photo. 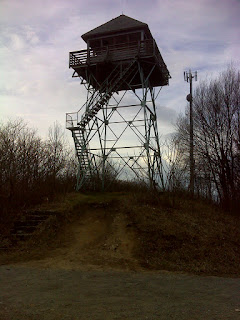 By the time I got to the top of Rich Mountain it was getting really windy, but the side trail to, and views from, the tower, which is open to the public, were well worth getting a bit chilled in the wind. 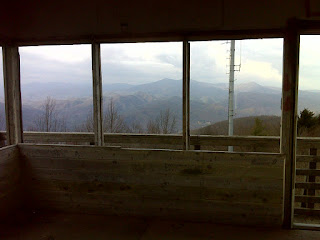 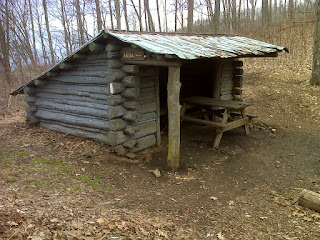 Back on the trail I made the steep descent to Hurricane Gap with two road crossings, then the moderate ascent of Spring Mountain almost always on exposed windy ridge following the state line. This section must be original AT because the Spring Mountain shelter near the summit was built in 1938 by the CCC. It is in good shape but with old plank sleeping platforms that are truly rustic – three spots for individuals and one for a couple.

I arrived at the shelter at the same time two ladies arrived from the other direction. We chatted as they snacked and I wrote in the log book. They are on a four day outing based in Hot Springs, doing day hikes. They told me to look for ‘Rambo’ and ‘Spicotti’, NoBo thru-hikers whom they had met in Hot Springs. They said to tell them ‘Hi from the Two Cougars’ if I met them – never got the explanation of what ‘two cougars’ signified (it's not a trail name). 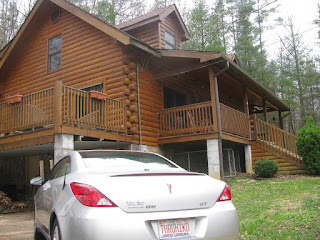 From Spring Mtn. shelter the trail descends in three steep steps with short climbs out of two gaps, the second being one of a bazillion gaps called ‘Deep Gap’. Finally I got to my turn-around at Allen Gap and found a sign posted there by Trail Angels and ’99 thru-hikers, 'Fal' and 'Hercules', who live 0.2 miles east of the AT crossing in a beautiful log home. The sign said they were open to serve snacks and stew and vegetarian chili to hikers between 7:30 and 5PM yesterday and today. (Do not bother them if they don't have a sign posted at the AT crossing - please respect their privacy.) It was 12:40 and I had until 1:15 before I needed to turn around, so I decided to check them out – very nice people and a beautiful home, and the vegetarian chili was fantastic, really hit the spot. 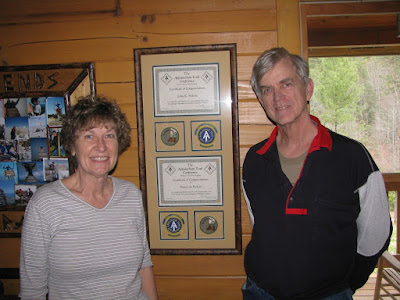 Back on the trail returning southbound I met ‘Spicotti’ 0.7 miles up. He was alone and really trucking along, hoping to make it to Little Laurel Shelter before the forecast tornadic storms hit. It was already spitting rain. He’s been on the trail since Feb 1st, making good time. I relayed the Two Cougars' message and told him about the Trail Angel food stop – he thanked me, said he’d stop in.

The weather continued threatening – rain, some fog, and one clap of thunder. I met ‘Rambo’ and a friend whose trail name I failed to ask. They were taking a rest stop two miles further up the trail. We had a nice but brief chat and I passed word from ‘Spicotti’ and from the Two Cougars and turned down an offered toke of weed. They were very nice, very young guys, and seemed quite a bit more relaxed about their thru-hike than ‘Spicotti’. 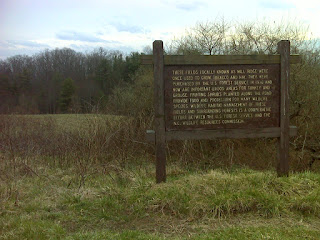 I hurried on as skies darkened, but chose not to stop at the shelter as the rain seemed to be letting up. It was the right choice. The rain did stop before I got to Rich Mtn., and by the time I got back to Tanyard Gap it was mild (in the 60’s) and cloudy but the winds had calmed and there was no sign of storms. So I decided to hike another mile south, up to the pretty meadows on Mill Ridge, former tobacco fields, purchased by the forest service in 1970 and maintained as open wildlife habitat. I finished after sunset – a long and satisfying day – good to have some ‘people stories’ today for a change.

Here's the track from today with (sorry for this glitch - I'm not tech savvy enough to know how to fix it) yesterday's track attached. The section with all the red pins (each marking a photo taken today) is the actual track from today.

AT Day 56 - Rich Mountain at EveryTrail
EveryTrail - Find the best Hiking in North Carolina
Posted by PJ Wetzel at 2:59 PM