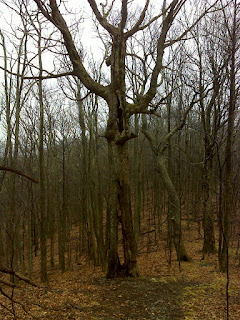 This guy has stood silently beside the Appalachian Trail long enough, watching with envy as uncounted humans stroll casually by. And he's had enough! No more stationary, passive existence! No fate as a future stump for him - this guy has decided to sprout legs and do some hiking! 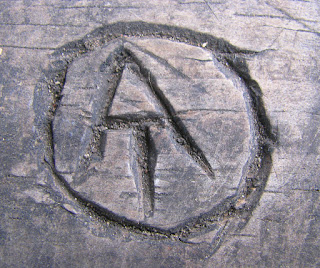 He stands near where the AT finishes its side-hill climb northbound from Iron Mountain Gap to the ridge with the same name. And he's ready for the ridge ramble. This is a very pleasant stretch of trail that meanders along, not gaining or losing much elevation, following the North Carolina-Tennessee boundary for about five miles. It passes through a clearing in a little hollow with an old Apple Orchard. It drops down to Weedy Gap and later Greasy Creek Gap; and it passes the trail to Clyde Smith Shelter where I found this rustic little example of trail art. But mostly it rambles along the broad, loosely defined ridge of Iron Mountain until it reaches the rocky cliff known as Little Rock Knob. 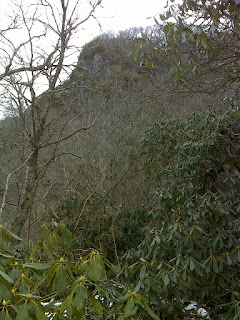 There, suddenly, the trail transforms from a ramble to a scramble - steeply up this face through rhododendron thickets and over uneven bedrock in order to pass three opportunities for good views to the west. 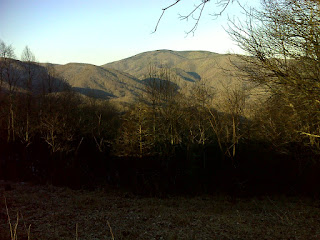 I started today's hike (Day 47, Wednesday February 22nd) in bright sunshine. A morning vista from a clearing about a mile north of Iron Mountain Gap was bright and clear. 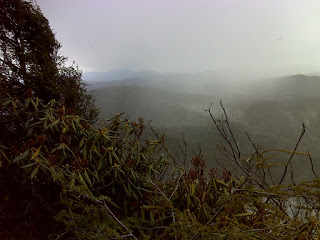 But a sudden storm rolled in as I began the scramble up Little Rock Knob, so that my views from there were shrouded by waves of squally snow. (For a crystal clear vista from the same vantage point, check yesterday's entry.) Despite the initial bluster, the weather never got very bad. It settled down to a light rain, and that continued all the way back to my starting point. I might have hiked farther - done a leg to the south - but 14 miles was enough in the rain.

Humans are like that - they don't enjoy hiking in the rain. No such problem for our giant ridge ramblin' wannabe. Sometimes it pays to have deep roots. 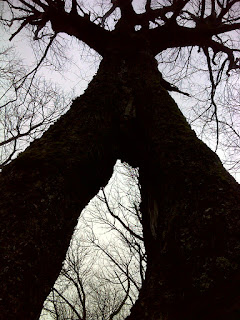 Here's the GPS track and a link to more photos:

AT Day 47 - Iron Mountain at EveryTrail
EveryTrail - Find the best Hiking in North Carolina
Posted by PJ Wetzel at 11:39 PM