Notes from a rest day 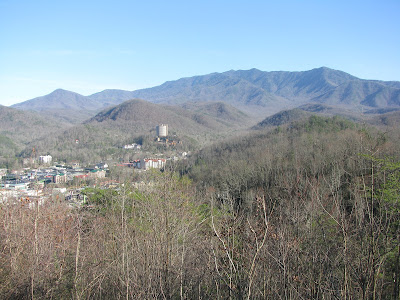 After 32 miles yesterday and with a 30 mile day next on the agenda, it was a logical choice to take a rest day today. Had a chance to check out the mega-tourist-trap known as Gatlinburg. Gatlinburg is a downtown destination on steroids—bigger and more packed with gaudy, quirky shops and eateries than anywhere I’ve ever seen, including Honolulu. In many ways it has surpassed the original attraction, the Natioinal Park at its doorstep, becoming a destination in its own right. Even on midday on this cool, clear sunny Friday (March 9th), the streets were packed with tourists and shoppers and people seeing and being seen. It was much busier than, for example, the trailhead parking areas in the park, and the Park's main visitor center.

There at the visitor center I got some semi-good news. The road to Clingman's Dome will open a week from today. That's not quite soon enough for me to continue an uninterrupted progression southward, but at least I won't have far to come back and do the missed section next weekend.

In other developments, I learned this week that I have a personal friend (OK ... the little sister of my brother's good friend from High-school) who is doing a thru-hike with her husband this year. 'X Trovert' and her husband, soon to retire from the National Park Service, 'N Trovert' plan to step onto the trail April 10th. X and N are actively posting pre-hike reports on the Trail Journals site, and they're very interesting and entertaining reading. Take for example this gem from N's post of yesterday:

Suddenly X and N are not just casual distant acquaintances any more - the kinds of connections that all of us have thousands of. Suddenly we are close family! We will be following each others' progress and hope to cross paths later in the year somewhere up north.

And finally, a little trail miscellany. When you're hiking 8 hours a day or more, sometimes you get a little 'trail crazy' late in the day, and the strangest things catch your imagination. Here are just a few examples.

First, there's the poltergeist who swept up from nowhere, in the form of a log, blocked the trail in front of me, held up a ghostly arm and called out "Halt! Who goes there?" in its eerie, quavering haunted voice. (Well I made up the part about hearing the voice - I'm not that far gone ... yet.) 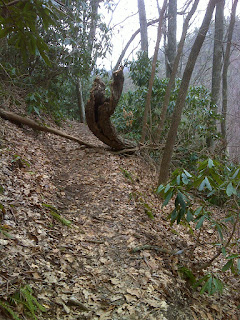 Last for now, from my collection of white blaze photos - here's Bart the Blaze who lives near Tanyard Gap not far from Hot Springs, NC: 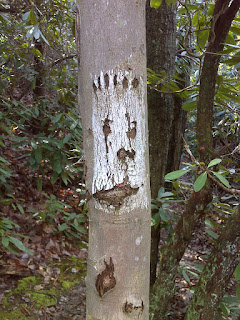